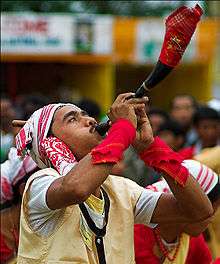 A group of Bihu dance performers

Bihu (Assamese: বিহু) denotes a set of three different cultural festivals of Assam and celebrated by the Assamese diaspora around the world. Bihu is a celebration that is related to the crop cycle. It is the counterpart of what's called Vaisakhi in Punjab and Vishu in Kerala. Bihu is also used to imply Bihu dance otherwise called Bihu Naas and Bihu folk songs also called Bihu Geet.

In Assam, Rongali Bihu draws from many different traditions— Austro-Asiatic, Sino-Burmese and Indo-Aryan—and is celebrated with great fervor. Celebrations begin in the middle of April and generally continue for a month. This is the traditional new year. In addition there are two other Bihus: Kongali Bihu in October (associated with the September equinox) and Bhogali Bihu in January (associated with the January solstice). Like some other Indian festivals, Bihu (all three) is associated with farming; as the traditional Assamese society is predominantly agricultural. In fact, similar festivals are also celebrated around the same time elsewhere in India. Bihu is also celebrated overseas by the Assamese community living in different countries around the globe.

In a year there are three Bihu festivals in Assam - in the months of Bohaag (Baisakh, the middle of April), Maagh (the middle of January), and Kaati (Kartik, the middle of October). The Bihus have been celebrated in Assam since ancient times. Each Bihu coincides with a distinctive phase in the farming calendar. The most important and colourful of the three Bihu festival is the Spring festival "Bohag Bihu" or Rongali Bihu celebrated in the middle of April. This is also the beginning of the agricultural season. Bihu is celebrated in all parts of Assam and by people belonging to all castes and religions. Bihu is a secular festival which brings in humanity, peace and brotherhood among the people of various tribes, castes and religions of the region.

Bohag Bihu (mid-April, also called Rongali Bihu), the most popular Bihu celebrates the onset of the Assamese New Year (around April 14–15) and the coming of Spring. This marks the first day of the Hindu solar calendar and is also observed in Bengal, Manipur, Mithila, Nepal, Orissa, Punjab, Kerala and Tamil Nadu though called by different names. It's a time of merriment and feasting and continues, in general, for seven days. The farmers prepare the fields for cultivation of paddy and there is a feeling of joy around. The women make pitha, larus (traditional food made of rice and coconut) and Jolpan which gives the real essence of the season. The first day of the bihu is called goru bihu or cow bihu, where the cows are washed and worshipped, which falls on the last day of the previous year, usually on April 14. This is followed by manuh (human) bihu on April 15, the New Year Day. This is the day of getting cleaned up, wearing new cloths and celebrating and getting ready for the new year with fresh vigor. The third day is Gosai (Gods) bihu; statues of Gods, worshiped in all households are cleaned and worshiped asking for a smooth new year. 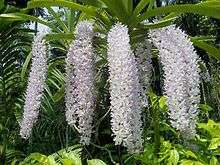 The folk songs associated with the Bohag Bihu are called Bihugeets or Bihu songs. The form of celebration and rites vary among different demographic groups.

Rongali Bihu is also a fertility festival, where the bihu dance with its sensuous movements using the hips, arms, etc., by the young women call out to celebrate their fertility. In this aspect, the bihu dance can also be called a mating ritual by the young men and women.

Kongali Bihu (mid-October, also called Kati-Bihu) has a different flavor as there is less merriment and the atmosphere has a sense of constrain and solemnity. During this time of the year, the paddy in the fields are in the growing stage and the granaries of the farmers are almost empty. On this day, earthen lamps (saki) are lit at the foot of the household tulsi plant, the granary, the garden (bari) and the paddy fields. To protect the maturing paddy, cultivators whirl a piece of bamboo and recite rowa-khowa chants and spells to ward off pests and the evil eye. During the evening, cattle are fed specially made rice items called pitha. The Bodo people light lamps at the foot of the siju (Euphorbia neriifolia) tree. This Bihu is also associated with the lighting of akaxi gonga or akaxbonti, lamps at the tip of a tall bamboo pole, to show the souls of the dead the way to heaven, a practice that is common to many communities in India, as well as Asia and Europe.[4]

A Buffalo fight held at Ranthali, in Nagaon District of Assam, on the occasion of Maagh Bihu

Bhogali Bihu (mid-January, also called Magh Bihu) comes from the word Bhog that is eating and enjoyment.[5] It is a harvest festival and marks the end of harvesting season. Since the granaries are full, there is a lot of feasting and eating during this period. On the eve of the day called uruka, i.e., the last day of pausa, menfolk, more particularly young men go to the field, preferably near a river, build a makeshift cottage called Bhelaghar with the hay of the harvest fields and the bonfire or Meji, the most important thing for the night. During the night, they prepare food and there is community feasting everywhere. There is also exchange of sweets and greetings at this time. The entire night (called Uruka) is spent around a Meji with people singing bihu songs, beating Dhol, a typical kind of drums or playing games. Boys roam about in the dark stealing firewood and vegetables for fun. The next morning they take a bath and burn the main Meji. People gather around the Meji and throw Pithas (rice cakes) and betel nuts to it while burning it at the same time. They offer their prayers to the God of Fire and mark the end of the harvesting year. Thereafter they come back home carrying pieces of half burnt firewood for being thrown among fruit trees for favourable results. All the trees in the compound are tied to bamboo strips or paddy stems. Different types of sports like Buffalo-fight, Egg-fight, Cock-fight, Nightingale-fight etc. are held throughout the day. There are other conventional festivals observed by various ethnic-cultural groups. Me-dam-me-phi, Ali-aye-ligang, Porag, Garja, Hapsa Hatarnai, Kherai are few among them. The koch celebrates this bihu as pushna.[6] All assamese people around the world celebrates this tradition on the month of January as per English calendar. The Uruka comes on 13 January followed by the Bihu on 14 January.

Bihu is also seen to be celebrated abroad. Many Bihu associations / committees exist elsewhere where this festival is celebrated with enthusiasm. The London Bihu Committee (LBC), UK is one of them amongst others.

Related holidays in other cultures

It coincides with the New Years in many other Southern Asian calendars, including: