Vishu (Malayalam: വിഷു) is a Hindu festival primarily celebrated in the Indian state of Kerala, which marks the beginning of the harvest year. It is also celebrated as Bisu in Tulunadu regions like the Kasargod district of Kerala, Mangalore and Udupi district of Karnataka, India and as Bihu in Assam. Vishu falls on the month of Medam in the Malayalam calendar, usually in the second week of April in the Gregorian calendar.[2][3]

Vishu is celebrated with much fanfare and vigour in all parts of Kerala by Hindus.[4][5] It is considered a festival of light and fireworks,[4] and decorating lights and bursting of firecrackers (Vishupadakkam) is part of the celebration. Other elements of Vishu include buying of new clothes (Puthukodi) for the occasion, the tradition of giving money called Vishukkaineetam ,[4] and the Vishu feast or Sadya, which consist of equal proportions of salty, sweet, sour and bitter items. Feast items include Veppampoorasam, Mampazhappulissery, Vishu kanji and Vishu katta .[4]

The most important event in Vishu is the Vishukkani, which literally means "the first thing seen on the day of Vishu after waking up". The Vishukkani consists of a ritual arrangement of auspicious articles intended to signify prosperity, including rice, fruits and vegetables, betel leaves, arecanut, metal mirror, yellow flowers called konna (Cassia fistula), holy texts and coins, all arranged around lord Krishna in an ambience lit by nilavilakku or tookkuvilakku (traditional oil lamps) usually in the prayer room of the house. This is arranged the night before Vishu and is the first sight seen on Vishu. On Vishu, devotees often visit temples like Sabarimala Ayyappan Temple or Guruvayur Sree Krishna temple to have a 'Vishukkani Kazhcha' (viewing) in the early hours of the day.

Interesting belief is related to the demon king Ravana. Ravana had never allowed Surya deva (Sun God) to rise straight from the East and after Ravana’s death it was on a Vishu day, that Surya deva started to rise from the East. Hindus of Kerala and nearby places celebrate Vishu to commemorate the return of Surya deva.

Vishu signifies the sun's transit into the Meda Raasi (first zodiac sign) according to Indian astrological calculations, and falls on the spring equinox.[4][6] During the equinox, a day has equal number of hours of daylight and darkness,[4] which describes the origin of the word "Vishu" which in Sanskrit means "equal".[6] Vishu is a festival, on which farmers in kerala begins their agriculture activities..

These are arranged in a bell metal vessel called uruli in the puja room of the house. A lighted bell metal lamp called nilavilakku is also placed alongside. This is arranged the night before Vishu. On Vishu, the custom is to wake up at dawn and go to the prayer room of the house, with eyes closed so that the Vishukkani is the first sight in the new season. According to the age-old belief of Malayalees, an auspicious kani at dawn on the Vishu day is lucky for the entire year. As a result, the Vishukkani is prepared with a lot of care to make it a positive sight and bring a wonderful, prosperous year ahead. Reading verses from the Hindu Holy book Ramayanam after seeing the Vishukkani is considered auspicious. It is also believed that the page of the Ramayanam which is opened up will have a bearing on one's life in the coming year. 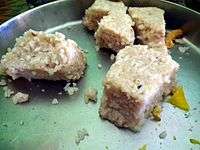 The Sadhya (feast) is a major part of all Kerala festivals. However, Vishu Kanji, Thoran and Vishu katta are more important during Vishu. The Kanji is made of rice, coconut milk and spices. Vishu katta is a delicacy prepared from freshly harvested rice powder and coconut milk served with jaggery.[4] For Thoran, the side dish, there are also mandatory ingredients. Other important Vishu delicacies include Veppampoorasam (a bitter preparation of neem) and Mampazhappulissery (a sour mango soup)[7]

Crackers and lights are an important part of Vishu celebration in all of Kerala.[4] In the morning and on the eve, children enjoy setting off firecrackers.

Related holidays in other cultures

It coincides with the New Years in many other Southern Asian calendars, including: