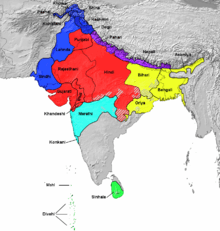 Genealogically, Asamiya belongs to the group of Eastern Indo-Aryan languages, marked in yellow.

Asamiya text, one of the writing systems of India.

Assamese, Asamiya, Axomiya or Oxomiya (English pronunciation: /ˌæsəˈmiːz/;[5] Assamese: অসমীয়া, Ôxômiya, pronounced: [ɔˈxɔmija]) is an Eastern Indo-Aryan language spoken mainly in the state of Assam, where it is an official language. The easternmost of the Indo-Aryan languages, it is spoken by over 13 million native speakers,[6] and serves as a lingua franca in the region.[7] It is also spoken in parts of Arunachal Pradesh and other northeast Indian states. Nagamese, an Assamese-based Creole language is widely used in Nagaland and parts of Assam. Nefamese is an Assamese-based pidgin used in Arunachal Pradesh. Small pockets of Assamese speakers can be found in Bangladesh. In the past, it was the court language of the Ahom kingdom from the 17th century.

Along with other Eastern Indo-Aryan languages, Assamese evolved at least before 7th century A.D[8] from the Magadhi Prakrit, which developed from dialects similar to, but in some ways more archaic than Vedic Sanskrit.[9] Its sister languages include Bengali, Odia, Maithili, Chittagonian, Sylheti, Angika and Bihari languages. It is written in the Assamese script, an abugida system, from left to right, with a large number of typographic ligatures.

Silver coin issued during the reign of Rudra Sinha with Asamiya inscriptions. 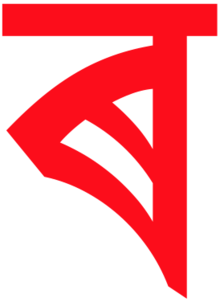 RôOne of the distinguishing alphabets of Asamiya script.

Assamese originated in Old Indo-Aryan dialects, though the exact nature of its origin and growth in not clear yet.[10] It is generally believed that Assamese (Assam) and the Kamatapuri lects (North Bengal and Assam) derive from the Kamarupa dialect of Eastern Magadhi Prakrit and Apabhramsa,[11] by keeping to the north of the Ganges;[12] though some authors contest a close connection of Assamese with Magadhi Prakrit.[13] The Indo-Aryan language in Kamarupa had differentiated by the 7th-century, before it did in Bengal or Orissa.[14] These changes were likely due to non-Indo-Aryan speakers adopting the language.[15][16][17] The evidence of this language is found in the Prakritisms of the Kamarupa inscriptions.[18][19] The earliest forms of Assamese in literature are found in the ninth-century Buddhist verses called Charyapada (চৰ্যাপদ), and in 12-14th century works of Ramai Pundit (Sunya Puran), Boru Chandidas (Krishna Kirtan), Sukur Mamud (Gopichandrar Gan), Durllava Mullik (Gobindachandrar Git) and Bhavani Das (Mainamatir Gan). In these works, Assamese features coexist with features from other Modern Indian Languages.

A fully distinguished literary form (poetry) appeared first in the fourteenth century—in the courts of the Kamata kingdom and in the courts of an eastern Kachari king where Madhav Kandali translated the Ramayana into the Assamese (Saptakanda Ramayana). From the fifteenth and sixteenth centuries, songs – Borgeets, dramas – Ankiya Naat and the first prose writings (by Bhattadeva) were composed. The literary language, based on the western dialects of Assam moved to the court of the Ahom kingdom in the seventeenth century,[20] where it became the state language. This period saw the widespread development of prose infused with colloquial forms.

According to Goswami (2003), this included "the colloquial prose of religious biographies, the archaic prose of magical charms, the conventional prose of utilitarian literature on medicine, astrology, arithmetic, dance and music, and above all the standardized prose of the Buranjis.[21] The literary language, having become infused with the eastern idiom, became the standard literary form in the nineteenth century, when the British adopted it for state purposes. As the political and commercial center shifted to Guwahati after the mid-twentieth century, the literary form moved away from the eastern variety to take its current form.

Assamese is native to Assam Valley which includes Upper-Assam and Lower-Assam regions of the state of Assam. It is also spoken in states of Arunachal Pradesh and Nagaland. There are also significant Assamese-speaking communities in Australia,[22] Dubai,[23] the United Kingdom,[24] Canada and the United States.[25]

Assamese or Asamiya consonant clusters include are thirty three pure consonant letters in Assamese alphabet and each letter represents a single sound with an inherent vowel, the short vowel /a /. The first twenty-five consonants letters are called ‘sparxa barna’. These ‘sparxa barnas’ are again divided into five ‘bargs’. Therefore, these twenty-five letters are also called ‘bargia barna’.

The Assamese phoneme inventory is unique in the Indic group of languages in its lack of a dental-retroflex distinction among the coronal stops.[28] Historically, the dental and retroflex series merged into alveolar stops. This makes Assamese resemble non-Indic languages of Northeast India (such as languages from the Austroasiatic and Sino-Tibetan languages).[29] The only other language to have fronted retroflex stops into alveolars is the closely related eastern dialects of Bengali (although a contrast with dental stops remains in those dialects). Note that /r/ is normally realized as [ɹ] or as a retroflex approximant.

Assamese and Sylheti are unusual among Eastern Indo-Aryan languages for the presence of the /x/ (which, phonetically, varies between velar ([x]) and a uvular ([χ]) pronunciations, depending on the speaker and speech register), historically the MIA sibilant has lenited to /x/ and /h/ (non-initially).[30] The derivation of the velar fricative from the coronal sibilant /s/ is evident in the name of the language in Assamese; some Assamese prefer to write ⟨Oxomiya⟩ or ⟨Ôxômiya⟩ instead of ⟨Asomiya⟩ or ⟨Asamiya⟩ to reflect the sound change.[31] The voiceless velar fricative is absent in the West Goalpariya dialects[32] though it is found in lesser extent in East Goalpariya and Kamrupi,[33] otherwise used extensively further east. The change of /s/ to /h/ and then to /x/; all these have been attributed to Tibeto-Burman influence by Dr. Chatterjee.[34]

Eastern Indic languages like Assamese, Bengali, Sylheti, and Oriya do not have a vowel length distinction, but have a wide set of back rounded vowels. In the case of Assamese, there are four back rounded vowels that contrast phonemically, as demonstrated by the minimal set: কলা kôla [kɔla] ('deaf'), ক'লা kola [kola] ('black'), কোলা kûla [kʊla] ('lap'), and কুলা kula [kula] ('winnowing fan'). The near-close near-back rounded vowel /ʊ/ is unique in this branch of the language family.

Modern Assamese uses the Assamese script and historically Kamrupi script, a variant that traces its descent from the Gupta script. It very closely resembles the Mithilakshar script of the Maithili language, as well as to the Bengali script.[36] There is a strong literary tradition from early times. Examples can be seen in edicts, land grants and copper plates of medieval kings. Assam had its own system of writing on the bark of the saanchi tree in which religious texts and chronicles were written. The present-day spellings in Assamese are not necessarily phonetic. Hemkosh, the second Assamese dictionary, introduced spellings based on Sanskrit, which are now the standard.

The Assamese language has the following characteristic morphological features:[37]

Verbs in Assamese are negativized by adding /n/ before the verb, with /n/ picking up the initial vowel of the verb. For example:[38]

Assamese has a huge collection of classifiers, which are used extensively for different kinds of objects, acquired from Sino-Tibetan languages.[39] A few examples of the most extensive and elaborate use of classifiers given below:

The language has quite a few regional variations. Banikanta Kakati identified two broad dialects which he named (1) Eastern and (2) Western dialects,[41] of which the eastern dialect is homogeneous, and prevalent to the east of Guwahati, and the western dialect is heterogeneous. However, recent linguistic studies have identified four dialect groups listed below from east to west:[27]

Assamese does not have caste- or occupation-based dialects. In the nineteenth century, the Eastern dialect became the standard dialect because it witnessed more literary activity and it was more uniform from east of Guwahati to Sadiya,[42] whereas the western dialects were more heterogeneous.[43] Since the nineteenth century, the center of literary activity (as well as of politics and commerce) has shifted to Guwahati; as a result, the standard dialect has evolved considerably away from the largely rural Eastern dialects and has become more urban and acquired western dialectal elements.[44] Most literary activity takes place in this dialect, and is often called the likhito-bhaxa, though regional dialects are often used in novels and other creative works.

In addition to the regional variants, sub-regional, community-based dialects are also prevalent, namely:

There is a growing and strong body of literature in this language. The first characteristics of this language are seen in the Charyapadas composed in between the eighth and twelfth centuries. The first examples emerged in writings of court poets in the fourteenth century, the finest example of which is Madhav Kandali's Saptakanda Ramayana. The popular ballad in the form of Ojapali is also regarded as well-crafted. The sixteenth and seventeenth centuries saw a flourishing of Vaishnavite literature, leading up to the emergence of modern forms of literature in the late nineteenth century.

The following is a sample text in Assamese of the Article 1 of the Universal Declaration of Human Rights:

Assamese in the International Phonetic Alphabet

Clause 1: All human free-manner-in equal dignity and right taken birth-take do. Their reason and intelligence exist; therefore everyone-indeed one another's towards brotherhood-ly attitude taken conduct do should.

Article 1: All human beings are born free and equal in dignity and rights. They are endowed with reason and conscience. Therefore, they should act towards one another in a spirit of brotherhood.