Bioenergetic systems are metabolic processes that relate to the flow of energy in living organisms. Those processes convert energy into adenosine triphosphate (ATP), which is the form suitable for muscular activity. There are two main forms of synthesis of ATP: aerobic, which involves oxygen from the bloodstream, and anaerobic, which does not. Bioenergetics is the field of biology that studies bioenergetic systems.

The cellular respiration process that converts food energy into ATP (a form of energy) is largely dependent on oxygen availability. During exercise, the supply and demand of oxygen available to muscle cells is affected by duration and intensity and by the individual's cardiorespiratory fitness level. Three exercise energy systems can be selectively recruited, depending on the amount of oxygen available, as part of the cellular respiration process to generate the ATP for the muscles. They are ATP, the anaerobic system and the aerobic system.

Since energy is released when ATP is broken down, energy is required to rebuild or resynthesize it. The building blocks of ATP synthesis are the by-products of its breakdown; adenosine diphosphate (ADP) and inorganic phosphate (Pi). The energy for ATP resynthesis comes from three different series of chemical reactions that take place within the body. Two of the three depend upon the type of food eaten, whereas the other depends upon a chemical compound called phosphocreatine. The energy released from any of these three series of reactions is coupled with the energy needs of the reaction that resynthesizes ATP. The separate reactions are functionally linked together in such a way that the energy released by the one is always used by the other.[1]:8–9

Aerobic and anaerobic systems usually work concurrently. When describing activity, it is not a question of which energy system is working, but which predominates.[3]

The term metabolism refers to the various series of chemical reactions that take place within the body. Aerobic refers to the presence of oxygen, whereas anaerobic means with series of chemical reactions that does not require the presence of oxygen. The ATP-CP series and the lactic acid series are anaerobic, whereas the oxygen series is aerobic.[1]:9 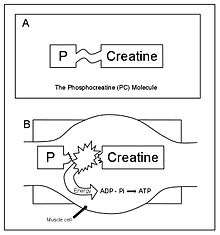 (A) Phosphocreatine, which is stored in muscle cells, contains a high energy bond. (B) When creatine phosphate is broken down during muscular contraction, a large amount of energy is released. The energy released is coupled with the energy requirement to resynthesize ATP.

Creatine phosphate (CP), like ATP, is stored in muscle cells. When it is broken down, a large amount of energy is released. The energy released is coupled to the energy requirement necessary for the resynthesis of ATP.

The total muscular stores of both ATP and CP are small. Thus, the amount of energy obtainable through this system is limited. The phosphogen stored in the working muscles is typically exhausted in seconds of vigorous activity. However, the usefulness of the ATP-CP system lies in the rapid availability of energy rather than quantity. This is important with respect to the kinds of physical activities that humans are capable of performing.[1]:9–11

This system is known as anaerobic glycolysis. "Glycolysis" refers to the breakdown of sugar. In this system, the breakdown of sugar supplies the necessary energy from which ATP is manufactured. When sugar is metabolized anaerobically, it is only partially broken down and one of the byproducts is lactic acid. This process creates enough energy to couple with the energy requirements to resynthesize ATP.

When H+ ions accumulate in the muscles causing the blood pH level to reach very low levels, temporary muscle fatigue results. Another limitation of the lactic acid system that relates to its anaerobic quality is that only a few moles of ATP can be resynthesized from the breakdown of sugar as compared to the yield possible when oxygen is present. This system cannot be relied on for extended periods of time.

This stage of the aerobic system occurs on the cristae (infoldings on the membrane of the mitochondria). The NADH+ from glycolysis and the Krebs cycle, and the FADH+ from the Krebs cycle produce electron carriers at decreasing energy levels, in which energy is released to reform ATP. Each NADH+ that travels this electron transport chain provides enough energy for 3 molecules of ATP, and each molecule of FADH+ provides enough energy for 2 molecules of ATP. If you do your math this means that 10 total NADH+ molecules allow the rejuvenation of 30 ATP, and 2 FADH+ molecules allow for 4 ATP molecules to be rejuvenated (the total being 34 from oxidative phosphorylation, plus the 4 from the previous 2 stages meaning a total of 38 ATP being produced during the aerobic system). The NADH+ and FADH+ get oxidized to allow the NAD and FAD to return to be used in the aerobic system again, and electrons and hydrogen ions are accepted by oxygen to produce water, a harmless byproduct.