For the album by Blood Axis, see Blót: Sacrifice in Sweden. 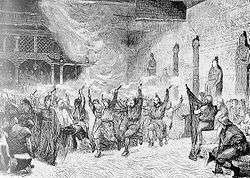 The Dísablót, by August Malmström.

Blót (Old Norse neuter) was a Norse pagan sacrifice to the Norse gods, the spirits of the land, and maybe even someone's ancestors. The sacrifice often took the form of a sacramental meal or feast. Related religious practices were performed by other Germanic peoples, such as the pagan Anglo-Saxons. The blót element of horse sacrifice is found throughout Indo-European traditions, including the Indian, Celtic and Latin traditions.

The verb blóta meant "to worship with sacrifice",[2] or "to strengthen".[3] The sacrifice usually consisted of animals, in particular pigs and horses. The meat was boiled in large cooking pits with heated stones, either indoors or outdoors. The blood was considered to contain special powers and it was sprinkled on the statues of the gods, on the walls and on the participants themselves.

It was a sacred moment when the people gathered around the steaming cauldrons to have a meal together with the gods or the Elves. The drink that was passed around was blessed and sacred as well and it was passed from participant to participant. The drink was usually beer or mead but among the nobility it could be imported wine.

The old prayer was til árs ok friðar, "for a good year and frith (peace)" They asked for fertility, good health, a good life and peace and harmony between the people and the powers.

The autumn blót was performed in the middle of October (about four weeks after the autumn equinox), the Winter Nights, indicating the beginning of winter. The great midwinter blót, or Yule, took place in the middle of January. Freyr was the most important god at the Midwinter and autumn blót, and Christmas ham (the pig was for Freyr) is still a main Christmas course in parts of Scandinavia. The Summer blót was undertaken in the middle of April (about four weeks after the spring equinox) and it was given to Odin.[4] Then, they drank for victory in war and this blót was the starting date for Viking expeditions and wars.

For the early Anglo-Saxons, November was known as Blōtmōnaþ, as this later Old English passage points out:

The month is named in Latin November, and in our speech Blót-month, because our forefathers, when they were heathens, always blóted in this month, that is, that they took and devoted to their idols the cattle which they wished to offer.

A building where the blót took place was called a hov (cf. German Hof) and there are many place names derived from this in e.g. Scania, West Götaland and East Götaland. Excavations at the medieval churches of Mære in Trøndelag and at Old Uppsala provide the few exceptions where church sites are associated with earlier churches.

The German historian Thietmar, Count of Merseburg wrote that the Daner had their main cult centre on Zealand at Lejre, where they gathered every nine years and sacrificed 99 people but also horses, dogs and hens. Archaeological excavations have indeed revealed Lejre to be of great importance and in fact the seat of the royal family dating to at least the Iron Age. There is not conclusive evidence that Lejre was the site of a main cult centre though, but excavations around lake Tissø not far to the West, have revealed an ancient hof of great importance.

Snorri Sturluson relates of a meeting between the peasants of Trøndelag and king Haakon I of Norway, a meeting which ended in a religious feud centered around the blót. Haakon was raised at the Christian English court and had returned to claim the throne of his father Harald Fairhair (the unifier of Norway) and intended to Christianize the country. In spite of the fact that the peasants had elected Haakon king at the Thing they opposed his religious ideas.

It was an old custom, that when there was to be sacrifice all the bondis [freeholders] should come to the spot where the temple stood and bring with them all that they required while the festival of the sacrifice lasted. To this festival all the men brought ale with them; and all kinds of cattle, as well as horses, were slaughtered, and all the blood that came from them was called "hlaut", and the vessels in which it was collected were called hlaut-vessels. Hlaut-staves were made, like sprinkling brushes, with which the whole of the altars and the temple walls, both outside and inside, were sprinkled over, and also the people were sprinkled with the blood; but the flesh was boiled into savoury meat for those present. The fire was in the middle of the floor of the temple, and over it hung the kettles, and the full goblets were handed across the fire; and he who made the feast, and was a chief, blessed the full goblets, and all the meat of the sacrifice. And first Odin's goblet was emptied for victory and power to his king; thereafter, Niord's and Freyja's goblets for peace and a good season. Then it was the custom of many to empty the brage-goblet (1); and then the guests emptied a goblet to the memory of departed friends, called the remembrance goblet.
— Hákon the Good's Saga, section 16, Sacred Texts website.

During this ceremony, the king also had to participate, although he was a Christian, and he had to drink of the mead that was offered and consecrated for Odin, Njord and Freyja. The peasants also wanted him to eat of the meat, but he only gaped over the handle of the cauldron and held a linen cloth between his mouth and the meat. The peasants were not at all satisfied with a king who would not participate fully in the blót. The King had however, been seriously humiliated and later he converted to the old faith. The tradition says that he was buried in the old ways.

The Gutasaga relates of the blót on the island of Gotland in the Baltic Sea:

Before this time, and a long time thereafter, they believed in groves and barrows, sanctuaries, and sacred enclosures and in the pagan gods. This they did due to their superstition. The whole country (the althing) had the largest blót with sacrifice of people, otherwise every trithing had its blót and smaller things had smaller blót with cattle, food and drinks. They were called food-, or cooking-brethren, because they prepared the meals together.

The German chronicler Adam of Bremen has described how it was done at the Temple at Uppsala at Old Uppsala in Sweden, ca 1070:

Thor was the most powerful god and ruled over thunder and lightning, wind and rain, sunshine and crops. He sat in the centre with a hammer (Mjolnir) in his hand, and on each side were Odin, the god of war, in full armour and Frey, the god of peace and love, attributed with an enormous erect phallus. All the pagan gods have their priests who offer them the people's sacrifices. If there is disease or famine, they sacrifice to Thor, if war to Odin and if weddings to Frey.

Every ninth year there is a blót of nine days, a common feast for everyone in Sweden. Then they sacrifice nine males of each species, even men, and the bodies are hung from the branches of a grove near the temple. No one is exempt from this blót and everyone sends gifts to the shrine, even the kings. Those who are Christian have to pay a fee not to take part in the blót.

Adam of Bremen considered this financial penalty to be very harsh. 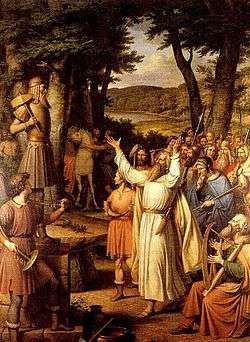 A depiction of a Goði leading the people in sacrificing to an idol of Thor in this painting by J. L. Lund.

It is possible that the last nine-day blót was performed in 1078. The Temple at Uppsala was probably destroyed by king Ingold I in 1087. For quite some time there had been civil war between Christians and pagans every nine years, and this was the year of the last battle.

According to Snorri, there was a main blót at the Temple at Uppsala in February, the Dísablót, during which they sacrificed for peace and for the victories of the king. The blót was also performed to see how large the next harvest would be. Then the Thing of all Swedes was held and there was a grand fair, the Disting. The Disting survived Christianity, and the tradition has never been interrupted. The fair is still held every first Tuesday in February in Uppsala, even though the date has sometimes been moved within the month. In 1968, the tradition of discussing official matters was resumed.

As with many aspects of Norse paganism, remnants survive to this day amongst the Scandinavian peoples.

This applies to Scandinavian Yule or Christmas traditions in particular, such as the Christmas porridge, of which an extra bowl often is served and carried outdoors, because this is a meal shared with the guardian of the homestead, the tomte (nisse in Danish and Norwegian), a land wight.

The Þorrablót is an Icelandic tradition introduced in the 19th century, deliberately harking back to the term blót associated with pre-Christian times.

Modern adherents of the reconstructionist Heathen religion continue to practice the ritual of blót, which is one of the most important ritual observances of their religion, in addition to symbel. But most do not follow the old blót calendar but a Wiccan-influenced calendar based on the solstices and equinoxes.