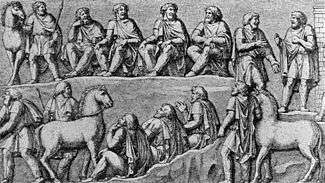 Germanic thing, drawn after the depiction in a relief of the Column of Marcus Aurelius (193 CE)

A thing (Old Norse, Old English and Icelandic: þing; Norwegian, Danish and Swedish: ting; German and Dutch: ding) was the governing assembly of a Germanic society, made up of the free people of the community presided over by lawspeakers. Its meeting-place was called a thingstead.

The Anglo-Saxon folkmoot or folkmote (Old English – "folk meeting", modern Norwegian; folkemøte) was analogous, the forerunner to the witenagemot and a precursor of the modern Parliament of the United Kingdom.

Today the term lives on in the English term husting, in the official names of national legislatures and political and judicial institutions of Nordic countries and, in the Manx form tyn, as a term for the three legislative bodies on the Isle of Man.

The Old Norse, Old Frisian, and Old English þing with the meaning "assembly" is identical in origin to the English word thing, German Ding, Dutch ding, and modern Scandinavian ting when meaning "object".[1] All of these terms derive from Proto-Germanic *þingą meaning "appointed time", and some suggest an origin in Proto-Indo-European *ten-, "stretch", as in a "stretch of time for an assembly".[1] The word shift in the meaning of the word thing from "assembly" to "object" is mirrored in the evolution of the Latin causa ("judicial lawsuit") to modern French chose, Spanish/Italian/Catalan cosa, and Portuguese coisa (all meaning "object" or "thing").[1] A word with similar meaning, sak in Norwegian and Swedish, sag in Danish, zaak in Dutch, and Sache in German, still retains the meaning "affair, matter" alongside "thing, object".

In English the term is attested from 685 to 686 CE in the older meaning "assembly"; later it referred to a being, entity or matter (sometime before 899), and then also an act, deed, or event (from about 1000). The early sense of "meeting, assembly" did not survive the shift to Middle English.[2] The meaning of personal possessions, commonly in plural, first appears in Middle English around 1300.[3] 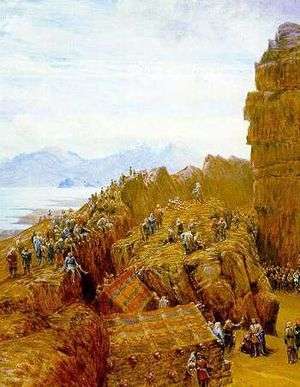 The Icelandic Althing in session, as imagined in the 1890s by British artist W. G. Collingwood.[4]

Þorgnýr the Lawspeaker showing the power of his office to the King of Sweden at Gamla Uppsala, 1018. The lawspeaker forced King Olof Skötkonung not only to accept peace with his enemy, King Olaf the Stout of Norway, but also to give his daughter to him in marriage. Illustration by C. Krogh.

In the pre-Christian clan-culture of Scandinavia the members of a clan were obliged to avenge injuries against their dead and mutilated relatives. A balancing structure was necessary to reduce tribal feuds and avoid social disorder. It is known from North-Germanic cultures that the balancing institution was the thing, although similar assemblies are reported also from other Germanic peoples and others.

The thing was the assembly of the free men and women of a country, province or a hundred (hundare/härad/herred). There were consequently hierarchies of things, so that the local things were represented at the higher-level thing, for a province or land. At the thing, disputes were solved and political decisions were made. The place for the thing was often also the place for public religious rites and for commerce.

The thing met at regular intervals, legislated, elected chieftains and kings, and judged according to the law, which was memorized and recited by the "law speaker" (the judge). The thing's negotiations were presided over by the law speaker and the chieftain or the king. In reality the thing was dominated by the most influential members of the community, the heads of clans and wealthy families, but in theory one-man one-vote was the rule.

Haugating, the Thing for Vestfold in Norway, was located in Tønsberg at Haugar (from the Old Norse haugr meaning hill or mound). This site was one of Norway's most important places for the proclamation of kings. In 1130, Harald Gille called together a meeting at the Haugating at which he was declared to be King of Norway. Sigurd Magnusson was proclaimed king in 1193 at Haugating. Magnus VII was acclaimed hereditary King of Norway and Sweden at the Haugating in August 1319.[5]

A famous incident took place when Þorgnýr the Lawspeaker told the Swedish king Olof Skötkonung (c. 980–1022) that the people, not the king, held power in Sweden; the king realized that he was powerless against the thing and gave in. Main things in Sweden were the Thing of all Swedes, the Thing of all Geats and the Lionga thing.

The island of Gotland had in late medieval time twenty things, each represented at the island-thing called landsting by its elected judge. New laws were decided at the landsting, which also took other decisions regarding the island as a whole. The landsting's authority was successively eroded after the island was occupied by the Teutonic Order in 1398. In late medieval times the thing was made up of twelve representatives for the farmers, free-holders or tenants.

The assembly of the thing was typically held at a specially designated place, often a field or common, like Þingvellir, the old location of the Icelandic thing (Alþingi). The parliament of the Isle of Man is still named after the meeting place of the thing, Tynwald, which etymologically is the same word as "þingvellir" (there is still an annual public assembly at Tynwald Hill each July 5th, where the new Manx laws are read out and petitions delivered). Other equivalent placenames can be found across northern Europe; in Scotland, there is Dingwall in the Highlands and Tingwall, occurring both in Orkney and Shetland, and further south there is Tinwald, in Dumfries and Galloway. In Sweden, there are several places named Tingvalla, which is the modern Swedish form of "Þingvellir", and the Norwegian equivalent is found in the place name Tingvoll. In Dublin, Ireland the Thingmote was a raised mound, 40 foot high and 240 foot in circumference, where the Norsemen assembled and made their laws. It stood on the south of the river, adjacent to Dublin Castle, until 1685.[6]

Similarly, in England there is Thingwall on the Wirral. In the Yorkshire and former Danelaw areas of England, which like the Wirral and north west England were subject to much Norse invasion and settlement, wapentakes (another name for the same institution) were, until recently, still used in public records. Several places ending in the -by ("village") place name suffix originally possessed their own law (bylaw) and jurisdiction subject to the wapentake in which they served, which often extended over a surrounding ground called a thorpe ("hamlet"). If there was a riding surrounding the wapentake. The wapentake would merely be a local assembly coordinating the power of the Riding, which in Jorvik's case, would be under the king's command at what is now King's Square in York. The Kingdom of East Anglia was in control of the Danelaw which had been organised as the Five Boroughs. Those Five were martial law fortresses defending land against Wessex, or against the Vikings, depending on who ruled there; together with Lindsey, which was divided into three ridings like Yorkshire. Again, the naming of the two roads named Inner and Outer Ting Tong on the hill-top in Devon between Budleigh Salterton, Woodbury and Exmouth is widely derided as fanciful, but is regarded by locals as being derived in the normal way from a Thing-Tun – a dun or small settlement around the place where the Thing used to meet.

Thynghowe was an important Danelaw meeting place, or thing, located in Sherwood Forest, Nottinghamshire, England. It was lost to history until its rediscovery in 2005–06 by local history enthusiasts Lynda Mallett and Stuart Reddish.[1] The site lies amidst the old oaks of an area known as the Birklands in Sherwood Forest. Experts believe it may also yield clues as to the boundary of the Anglo Saxon kingdoms of Mercia and Northumbria. English Heritage has recently inspected the site, and has confirmed it was known as "Thynghowe" in 1334 and 1609.[2] It functioned as a place where people came to resolve disputes and settle issues. Thynghowe is an Old Norse name, although the site may be older than the Danelaw, perhaps even Bronze Age. The word "howe" is derived from the Old Norse word haugr meaning mound. This often indicates the presence of a prehistoric burial mound.[3]

The national legislatures of Iceland, Norway and Denmark all have names that incorporate thing:

The legislatures of the self-governing territories of Åland, Faroe Islands, Greenland and Isle of Man also have names that refer to thing:

The Swedish national legislature, since medieval times, has borne a different style, Riksdag, which is cognate to the old name of the German national assembly, Reichstag. In Sweden ting is however used to name the subnational county councils, which are called Landsting. That name was also used in medieval times for the tings that governed the historical Landskap provinces, that were superseded by the counties in the 17th century. The name ting is also found in the names of the first level instances of the Swedish and Finnish court system, which are called tingsrätt (Finnish: käräjäoikeus), the Court of the Thing.

Similarly, prior to 1953, the Danish legislature was known as Rigsdagen, which comprised the two houses of the Folketinget (People's Thing) and Landstinget (The Land Thing). The latter, which was reserved for people of means, was abolished by the constitution of 1953.

Folkting is also the name of the Swedish Assembly of Finland, a semi-official body representing the Swedish-speaking population (Svenskfinland or "Swedish Finland").

In addition, there are three distinct elected Sami assemblies that are all called Sameting in Norwegian and Swedish.

The Norwegian parliament, the Storting, has historically been divided into two chambers named the Lagting and the Odelsting, which translates loosely into the Thing of the Law and the Thing of the Lords. However, for much of the Storting's recent history, the division into Lagting and Odelsting has been mostly ceremonial, and the Storting has generally operated as a unicameral parliament. A constitutional amendment passed in February 2007 abolished the Lagting and Odelsting, making this de facto unicameralism official following the 2009 election.

On the lower administrative level the governing bodies on the county level in Norway are called Fylkesting, the Thing of the County. The names of the judicial courts of Norway contain for the most part the affix ting. The primary level of courts is called the Tingrett, with the same meaning as the Swedish Tingsrätt, and four of the six Norwegian Courts of Appeal are named after historical Norwegian regional Things (Frostating, Gulating, Borgarting and Eidsivating).