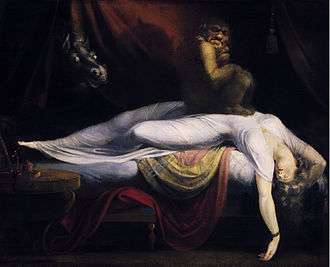 The Nightmare, by Henry Fuseli

A Mare (Old English: mære, Old Dutch: mare; mara in Old High German, Old Norse and Old Church Slavic) is an evil spirit or goblin in Germanic and Slavic folklore which rides on people's chests while they sleep, bringing on bad dreams (or "nightmares").[1]

The mare is often similar to the mythical creatures succubus and incubus.

The word "mare" comes (through Middle English mare) from Old English mære, mare, or mere, all feminine nouns. These in turn come from Common Germanic *marōn. *Marōn is the source of Old Norse: mara, from which are derived Swedish: mara; Icelandic: mara; Faroese: marra; Danish: mare; Norwegian: mare/mara, Dutch: (nacht)merrie, and German: (Nacht)mahr. The -mar in French cauchemar ("nightmare") is borrowed from the Germanic through Old French mare.[1]

The word may ultimately be traced back to the reconstructed Proto-Indo-European root *mer-, "to rub away" or "to harm".[2] Hungarian folklorist Éva Pócs endorses an alternate etymology, tracing the core term back to the Greek μόρος (Indo-European *moros), meaning "death".[3][4][5]

In Norwegian and Danish, the words for "nightmare" are mareritt and mareridt respectively, which can be directly translated as "mare-ride". The Icelandic word martröð has the same meaning (-tröð from the verb troða, "trample", "stamp on", related to "tread"), whereas the Swedish mardröm translates as "mare-dream".

The mare was also believed to "ride" horses, which left them exhausted and covered in sweat by the morning. She could also entangle the hair of the sleeping man or beast, resulting in "marelocks", called marflätor ("mare-braids") or martovor ("mare-tangles") in Swedish or marefletter and marefloker in Norwegian. The belief probably originated as an explanation to the Polish plait phenomenon, a hair disease.

Even trees were thought to be ridden by the mare, resulting in branches being entangled. The undersized, twisted pine-trees growing on coastal rocks and on wet grounds are known in Sweden as martallar ("mare-pines") or in German as Alptraum-Kiefer ("nightmare pine").

According to Paul Devereux, mares included witches who took on the form of animals when their spirits went out and about while they were in trance (see the Icelandic example of Geirrid, below). These included animals such as frogs, cats, horses, hares, dogs, oxen, birds and often bees and wasps.[4]

The mare is attested as early as in the Norse Ynglinga saga from the 13th century.[6] Here, King Vanlandi Sveigðisson of Uppsala lost his life to a nightmare (mara) conjured by the Finnish sorceress Huld or Hulda, hired by the king's abandoned wife Drífa. The king had broken his promise to return within three years, and after ten years had elapsed the wife engaged the sorceress to either lure the king back to her, or failing that, to assassinate him. Vanlandi had scarcely gone to sleep when he complained that the nightmare "rode him;" when the men held the king's head the it "trod on his legs" on the point of breaking, and when the retinue then "seized his feet" the creature fatally "pressed down on his head." [7]

According to the Vatnsdæla saga, Thorkel Silver (Þorkell Silfri) has a dream about riding a red horse that barely touched ground, which he interpreted as a positive omen, but his wife disagreed, explaining that a mare signified a man's fetch (fylgja), and that the red color boded bloodiness. This association of the nightmare with fetch is thought to be of late origin, an interpolation in the text dating to circa 1300, with the text exhibiting a "confounding of the words marr and mara."[8]

Another possible example is the account in the Eyrbyggja saga of the sorceress Geirrid accused of assuming the shape of a "night-rider" or "ride-by-night" (marlíðendr or kveldriða) and causing serious trampling bruises on Gunnlaug Thorbjornsson. The marlíðendr mentioned here has been equated to the mara by commentators.[9][10][11]

As in English, the name appears in the word for "nightmare" in the Nordic languages (e.g. the Swedish word "mardröm" literally meaning mara-dream, the Norwegian word "mareritt" and the Danish "Mareridt", both meaning Mare-ride or the Icelandic word "martröð" meaning mara-dreaming repeatedly).

In Germany they were known as mara, mahr, mare.

Such charms are preceded by the example of the Münchener Nachtsegen of the fourteenth century (See Elf under §Medieval and early modern German texts). Its texts demonstrates that certainly by the Late Middle Ages, the distinction between the mare, the alp, and the trute (drude) was being blurred, the mare being described at the alp's mother.[16]

In Polish folklore, zmora or mara are the souls of living people that leave the body during the night, and are seen as wisps of straw or hair or as moths. Accordingly, Polish mara, Czech můra denote both a kind of elf or spirit as well as a "sphinx moth" or "night butterfly".[17] Other Slavic languages with cognates that have the double meaning of moth are: Kashubian mòra,[18] and Slovak mora.

In Croatian, mora refers to a "nightmare". Mora or Mara is one of the spirits from ancient Slav mythology. Mara was a dark spirit that takes a form of a beautiful woman and then visits men in their dreams, torturing them with desire, and dragging life out of them. In Serbia, a mare is called mora, or noćnik/noćnica ("night creature", masculine and feminine respectively).[19] In Romania they were known as Moroi.

It is a common belief that mora enters the room through the keyhole, sits on the chest of the sleepers and tries to strangle them (hence moriti, "to torture", "to bother", "to strangle"). To repel moras, children are advised to look at the window or to turn the pillow and make a sign of cross on it (prekrstiti jastuk); in the early 19th century, Vuk Karadžić mentions that people would repel moras by leaving a broom upside down behind the door, or putting their belt on top of their sheets, or saying an elaborate prayer poem before they go to sleep.[20]

In Hungarian, the creature is known as éjjeljáró or "night-goer."[21] In Estonia the mare-like spirit is called Painaja (presser) or Külmking (cold-shoe). In Thailand this phenomenon is well documented and called ผีอำ (pee ahm), pee meaning "ghost". Buddhist residents wear amulets (พระเครื่อง) blessed by monks to ward off spirits such as these. In Turkey the mare is known as Karabasan (ominous-presser).