Blohm + Voss. also written historically as Blohm & Voss and Blohm und Voss. is a German shipbuilding and engineering company. It is currently a subsidiary of ThyssenKrupp Marine Systems.

The company also oversees maintenance and repair of large cruise ships such as RMS Queen Mary 2 and the MS Queen Victoria.[1]

In the 1930s the company established the Hamburger Flugzeugbau subsidiary which built aircraft before and during World War II and, shortly after the war's outbreak, took on its parent company's name.

ThyssenKrupp announced in December 2011 that it had agreed the sale of Blohm + Voss' civil shipbuilding division to British investment company STAR Capital Partners, pending regulatory approval.[2][3] On September 28, 2016, it was announced that Lürssen would acquire Blohm + Voss in a long-term partnership.[4] 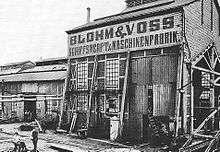 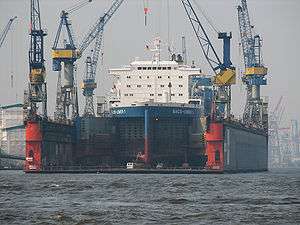 Blohm & Voss was founded on 5 April 1877, by Hermann Blohm and Ernst Voss as a general partnership. It established a shipyard on the island of Kuhwerder, near the Free and Hanseatic City of Hamburg, covering 15,000 m² with 250 m of water frontage and three building berths, two suitable for ships of up to 100 metres length. The company name was shown with the ampersand until 1955.

The company has built ships and other large machinery continuously for 125 years, despite being almost completely demolished by the end of World War II. It now builds warships both for the German Navy and for export (see MEKO), as well as oil drilling equipment and ships for numerous commercial customers. It administers the Elbe 17 dry dock at Hamburg.

The company is, along with Howaldtswerke at Kiel and Nordseewerke at Emden, a subsidiary of ThyssenKrupp Marine Systems.

History during the Nazi era

With the rise of the Nazi Party to power in 1933, Germany's rearmament in violation of the Versailles Treaty began. This rescued the company, then run by brothers Rudolf and Walther Blohm, from a financial crisis.

From July 1944 to April 1945 the company used inmates of its own concentration subcamp at its shipyard in Hamburg-Steinwerder, a subcamp of Neuengamme concentration camp.[5] A memorial stands on the site of the camp and the company continues to pay an undisclosed amount to the Fund for Compensation of Forced Laborers.[6]

Specialising until now in shipbuilding, in 1933 the company established a subsidiary called Hamburger Flugzeugbau, to to design and build aircraft for the German state airline, pre-war Deutsche Luft Hansa and, later, the Luftwaffe. The first planes it produced had the company designation "Ha", e.g. Ha 135. However the types were still commonly associated with Blohm & Voss, so in September 1937 the subsidiary was renamed Abteilung Flugzeugbau der Schiffswerft Blohm & Voss and the company code was replaced by "BV".[7]

Richard Vogt joined the Hamburger Flugzeugbau as Chief Designer not long after its formation. He was highly innovative and many of his designs had unusual features. His most significant design were flying boats, used by the Luftwaffe for maritime patrol and reconnaissance. Most numerous was the BV 138, a twin-boom trimotor, while the BV 222 Wiking was much larger. Largest of all was the BV 238 prototype, the largest aircraft built by any of the Axis forces. Other notable types include the asymmetric BV 141, which was built in moderate numbers but did not enter production.

Following the end of the war, Blohm & Voss lost control of the Hamburger Flugzeugbau, which re-emerged under separate ownership and, under different names and further changes of ownership, continues to build aircraft, it has no ties with Blohm & Voss.

Blohm & Voss was established in the days of sail and did not produce a notable steamship until 1900.

Ocean liners and other passenger ships 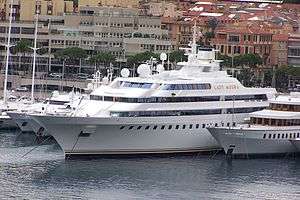 Warships of World War I 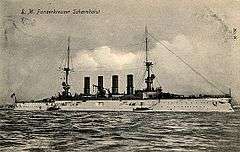 List of Major Internal Projects of the World War II Era under the RLM: