For the book by Rainer Maria Rilke, see The Book of Hours. 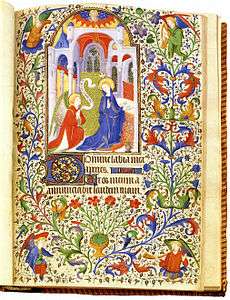 Book of hours, Paris c. 1410. Miniature of the Annunciation, with the start of Matins in the Little Office, the beginning of the texts after the calendar in the usual arrangement. 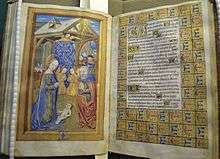 An early 15th century, French Book of Hours (MS13, Society of Antiquaries of London) open to an illustration of the 'Adoration of the Magi'. Bequeathed to the Society in 1769 by the Revd Charles Lyttleton, Bishop of Carlisle and President of the Society (1765-8).

An early 15th century French Book of Hours, open to an illustration of the 'Adoration of the Magi' (MS13, Society of Antiquaries of London, bequeathed to the Society in 1769 by the Revd Charles Lyttelton, Bishop of Carlisle and President of the Society (1754-8). 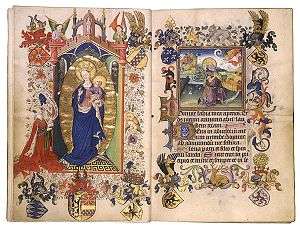 Opening from the Hours of Catherine of Cleves, c. 1440, with Catherine kneeling before the Virgin and Child, surrounded by her family heraldry. Opposite is the start of Matins in the Little Office, illustrated by the Annunciation to Joachim, as the start of a long cycle of the Life of the Virgin.[1]

The book of hours is a Christian devotional book popular in the Middle Ages. It is the most common type of surviving medieval illuminated manuscript. Like every manuscript, each manuscript book of hours is unique in one way or another, but most contain a similar collection of texts, prayers and psalms, often with appropriate decorations, for Christian devotion. Illumination or decoration is minimal in many examples, often restricted to decorated capital letters at the start of psalms and other prayers, but books made for wealthy patrons may be extremely lavish, with full-page miniatures.

Books of hours were usually written in Latin (the Latin name for them is horae), although there are many entirely or partially written in vernacular European languages, especially Dutch. The English term primer is usually now reserved for those books written in English. Tens of thousands of books of hours have survived to the present day, in libraries and private collections throughout the world.

The typical book of hours is an abbreviated form of the breviary which contained the Divine Office recited in monasteries. It was developed for lay people who wished to incorporate elements of monasticism into their devotional life. Reciting the hours typically centered upon the reading of a number of psalms and other prayers. A typical book of hours contains:

Most 15th-century books of hours have these basic contents. The Marian prayers Obsecro te ("I beseech thee") and O Intemerata ("O undefiled one") were frequently added, as were devotions for use at Mass, and meditations on the Passion of Christ, among other optional texts. 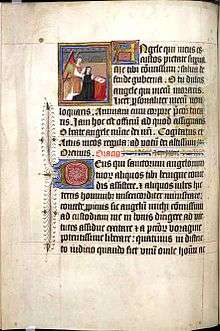 Even this level of decoration was more rich than that of most books, though less than the lavish amounts of illumination in luxury books, which are those most often seen reproduced.

The book of hours has its ultimate origin in the Psalter, which monks and nuns were required to recite. By the 12th century this had developed into the breviary, with weekly cycles of psalms, prayers, hymns, antiphons, and readings which changed with the liturgical season.[3] Eventually a selection of texts was produced in much shorter volumes and came to be called a book of hours.[4]

Many books of hours were made for women. There is some evidence that they were sometimes given as a wedding present from a husband to his bride.[5] Frequently they were passed down through the family, as recorded in wills.[5]

Although the most heavily illuminated books of hours were enormously expensive, a small book with little or no illumination was affordable much more widely, and increasingly so during the 15th century. The earliest surviving English example was apparently written for a laywoman living in or near Oxford in about 1240. It is smaller than a modern paperback but heavily illuminated with major initials, but no full-page miniatures. By the 15th century, there are also examples of servants owning their own Books of Hours. In a court case from 1500, a pauper woman is accused of stealing a domestic servant's prayerbook.[6]

Very rarely the books included prayers specifically composed for their owners, but more often the texts are adapted to their tastes or sex, including the inclusion of their names in prayers. Some include images depicting their owners, and some their coats of arms. These, together with the choice of saints commemorated in the calendar and suffrages, are the main clues for the identity of the first owner. By at least the 15th century, the Netherlands and Paris workshops were producing books of hours for stock or distribution, rather than waiting for individual commissions. These were sometimes with spaces left for the addition of personalized elements such as local feasts or heraldry.

By the end of the 15th century, the advance of printing made books more affordable and much of the emerging middle-class could afford to buy a printed book of hours, and new manuscripts were only commissioned by the very wealthy. The Kitab salat al-sawai (1514), widely considered the first book in Arabic printed using moveable type, is a book of hours intended for Arabic-speaking Christians and presumably commissioned by Pope Julius II.[7] 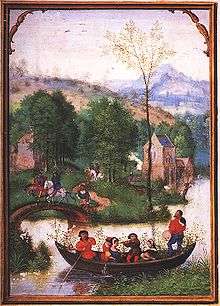 A full-page miniature of May, from a calendar cycle by Simon Bening, early 16th century.

As many books of hours are richly illuminated, they form an important record of life in the 15th and 16th centuries as well as the iconography of medieval Christianity. Some of them were also decorated with jewelled covers, portraits, and heraldic emblems. Some were bound as girdle books for easy carrying, though few of these or other medieval bindings have survived. Luxury books, like the Talbot Hours of John Talbot, 1st Earl of Shrewsbury, may include a portrait of the owner, and in this case his wife, kneeling in adoration of the Virgin and Child as a form of donor portrait. In expensive books, miniature cycles showed the Life of the Virgin or the Passion of Christ in eight scenes decorating the eight Hours of the Virgin, and the Labours of the Months and signs of the zodiac decorating the calendar. Secular scenes of calendar cycles include many of the best known images from books of hours, and played an important role in the early history of landscape painting.

From the 14th century decorated borders round the edges of at least important pages were common in heavily illuminated books, including books of hours. At the beginning of the 15th century these were still usually based on foliage designs, and painted on a plain background, but by the second half of the century coloured or patterned backgrounds with images of all sorts of objects, were used in luxury books.

Second-hand books of hours were often modified for new owners, even among royalty. After defeating Richard III, Henry VII gave Richard's book of hours to his mother, who modified it to include her name. Heraldry was usually erased or over-painted by new owners. Many have handwritten annotations, personal additions and marginal notes but some new owners also commissioned new craftsmen to include more illustrations or texts. Sir Thomas Lewkenor of Trotton hired an illustrator to add details to what is now known as the Lewkenor Hours. Flyleaves of some surviving books include notes of household accounting or records of births and deaths, in the manner of later family bibles. Some owners had also collected autographs of notable visitors to their house. Books of hours were often the only book in a house, and were commonly used to teach children to read, sometimes having a page with the alphabet to assist this.

Towards the end of the 15th century, printers produced books of hours with woodcut illustrations, and the book of hours was one of the main works decorated in the related metalcut technique.

The luxury book of hours 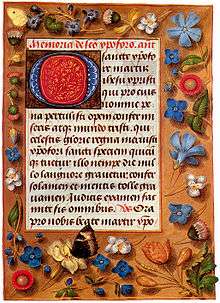 The lavish illusionistic borders of this Flemish book of hours from the late 1470s are typical of luxury books of this period, which were now often decorated on every page. The butterfly wing cutting into the text area is an example of playing with visual conventions, typical of the period.(Among the plants are the Veronica, Vinca, Viola tricolor, Bellis perennis, and Chelidonium majus. The butterfly is Aglais urticae. The Latin text is a devotion to Saint Christopher).

In the 14th century the book of hours overtook the psalter as the most common vehicle for lavish illumination. This partly reflected the increasing dominance of illumination both commissioned and executed by laymen rather than monastic clergy. From the late 14th century a number of bibliophile royal figures began to collect luxury illuminated manuscripts for their decorations, a fashion that spread across Europe from the Valois courts of France and the Burgundy, as well as Prague under Charles IV, Holy Roman Emperor and later Wenceslaus. A generation later, Duke Philip the Good of Burgundy was the most important collector of manuscripts, with several of his circle also collecting.[8] It was during this period that the Flemish cities overtook Paris as the leading force in illumination, a position they retained until the terminal decline of the illuminated manuscript in the early 16th century.

The most famous collector of all, the French prince John, Duke of Berry (1340–1416) owned several books of hours, some of which survive, including the most celebrated of all, the Très Riches Heures du Duc de Berry. This was begun around 1410 by the Limbourg brothers, although left incomplete by them, and decoration continued over several decades by other artists and owners. The same was true of the Turin-Milan Hours, which also passed through Berry's ownership.

By the mid-15th century, a much wider group of nobility and rich businesspeople were able to commission highly decorated, often small, books of hours. With the arrival of printing, the market contracted sharply, and by 1500 the finest quality books were once again being produced only for royal or very grand collectors. One of the last major illuminated book of hours was the Farnese Hours completed for the Roman Cardinal Alessandro Farnese in 1546 by Giulio Clovio, who was also the last major manuscript illuminator.

See Category:Illuminated books of hours for a fuller list