A Catholic funeral is carried out in accordance with the prescribed rites of the Catholic Church. Such funerals are referred to in Catholic canon law as "ecclesiastical funerals" and are dealt with in canons 1176–1185 of the Code of Canon Law and canons 874–879 of the Code of Canons of the Eastern Churches. In Catholic funerals, the Church seeks firstly to offer the Mass for the benefit of the soul of the deceased, that the temporal effects of sin in Purgatory may be extinguished, and secondly to provide condolence and comfort for the deceased's family and exhort them to pray, along with the Church, for the soul of the departed.

However, Catholic burial rites are to be refused even to baptized Catholics who fall within any of the following classifications, unless they gave some sign of repentance before death:

What follows concerns practice in the Roman Rite of the Latin Church. Practice within Eastern Catholic Churches is basically similar, but takes account of different traditions and follows different liturgical norms. There are some variations also with regard to other Latin liturgical rites.

The successive ordinary forms of the Roman Rite in use before the Second Vatican Council are now extraordinary forms. That of 1962 is explicitly authorized for continued use, under certain conditions, such as the limitation to a single such parish Mass on Sundays, by the motu proprio Summorum Pontificum. Funerals are one of the occasions on which this document states: "For faithful and priests who request it, the pastor should also allow celebrations in this extraordinary form for special circumstances."

While funerals may be held on any day, the special funeral Mass for such occasions are not to be celebrated on "Solemnities that are Holydays of Obligation, Thursday of Holy Week, the Paschal Triduum, and the Sundays of Advent, Lent, and Easter". As a rare exception, Pope Benedict XVI allowed Cardinal Secretary of State Tarcisio Bertone to celebrate a single funeral Mass for a group of victims of the 2009 L'Aquila earthquake on Good Friday, when no Mass at all is normally offered.

Conveyance to the church

The first portion of the funeral rites involves the parish priest and other clergy going to the house of the deceased. One cleric carries the cross and another carries a vessel of holy water. Before the coffin is removed from the house it is sprinkled with the holy water. The priest, with his assistants, says the psalm De profundis with the antiphon Si iniquitates. Then the procession sets out for the church. The cross-bearer goes first, followed by members of the clergy carrying lighted candles. The priest walks immediately before the coffin, and the friends of the deceased and others walk behind it. 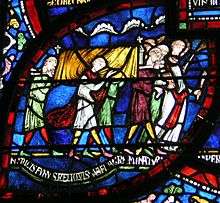 Funeral procession from the "Healing Window" at Canterbury Cathedral.

Historical precedents provide that, if the corpse is a layman, the feet are to be turned towards the altar. If the corpse is a priest, then the position is reversed, the head being towards the altar. The earliest reference to this is in Johann Burchard's "Diary". Burchard was the master of ceremonies to Pope Innocent VIII and Pope Alexander VI. The idea seems to be that the bishop (or priest) in death should occupy the same position in the church as during life, facing his people who he taught and blessed in Christ's name.

According to another tradition not now considered obligatory in the Roman Rite, the feet of all Christians both before the altar and in the grave should be pointed to the East. This custom is alluded to by Bishop Hildebert at the beginning of the 12th century,[12] and its symbolism is discussed by Guillaume Durand. "A man ought so to be buried", he says, "that while his head lies to the West his feet are turned to the East..."[13] 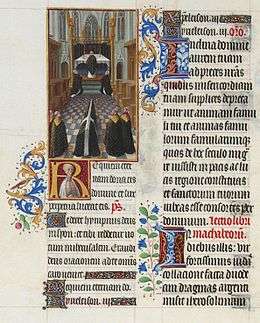 Next comes a cycle of prayers, the funeral Mass, and absolution of the dead. Candles are lit around the coffin, and they are allowed to burn throughout this stage.

The prayers offered are the Office of the Dead. In the earlier forms, certain omissions are made throughout the prayers. For example, each psalm ends with Requiem aeternam instead of the Gloria Patri.

The differences between a Requiem Mass and the usual Mass have been indicated above.

A funeral Mass is a form of Mass for the Dead or Requiem Mass, so called because of the first word of what in earlier forms of the Roman Rite was the only Introit (entrance antiphon) allowed: Réquiem ætérnam dona eis, Dómine; et lux perpétua lúceat eis. (Eternal rest give to them, O Lord; and let perpetual light shine upon them). As revised in 1970, the Roman Missal also provides alternative Introits.

The bier holding the body is positioned centrally close to the sanctuary of the church. A deceased lay person's feet are towards the altar, but a priest's are away from the altar,[14] positions reminiscent of their relative positions when alive and celebrating Mass.

A funeral Mass concludes with the rite of commendation of the dead person, in which the coffin containing the body is sprinkled with holy water and incensed. Earlier forms of the Roman Rite call this the absolution at the bier (absolutio ad feretrum).

In earlier forms of the Roman Rite, a Requiem Mass differs in several ways from the usual Mass in that form. Some parts that were of relatively recent origin (including some that have been excluded from all Masses in the 1970 revision) are omitted. Examples are the psalm Iudica at the start of Mass, the prayer said by the priest before reading the Gospel (or the blessing of the deacon, if a deacon reads it), and the first of the two prayers of the priest for himself before receiving Communion.[15] Other omissions include the use of incense at the Introit and the Gospel, the kiss of peace, lit candles held by acolytes when a deacon chants the Gospel, and blessings. Black is the obligatory liturgical colour of the vestments in the earlier forms, while the revised form allows a choice between black and violet, and in some countries, such as the United States, England, and Wales, white.[16][17] The sequence Dies Iræ, recited or sung between the Tract and the Gospel, is an obligatory part of the Requiem Mass in the earlier forms. As its opening words, Dies irae (Day of wrath), indicate, this poetic composition speaks of the Day of Judgment in fearsome terms; it then appeals to Jesus for mercy.

Some of these differences may have arisen from treating this Mass as supplementary to the Mass of the day. In other cases, the Requiem Mass preserves the tradition of a more primitive age. The suppression of the Alleluia, Gloria in excelsis, and the Gloria Patri seems to point to a sense of the incongruity of joyful themes in the presence of God's searching and inscrutable judgments.[18] In the early Christian ages, however, it seems that the Alleluia, especially in the East, was regarded as especially appropriate to funerals.

Absolution of the dead

Main article: Absolution of the dead

What is called absolution of the dead, although the 1969 revision of the liturgy of the Roman Rite replaced it with what is called the Commendation, is used when the 1962 form is celebrated. It is a series of prayers for pardon said over the body of a deceased Catholic following a Requiem Mass and before burial. The absolution of the dead does not forgive sins or confer the sacramental absolution of the Sacrament of Penance. Rather, it is a series of prayers to God that the person's soul will not have to suffer the temporal punishment in purgatory due for sins which were forgiven during the person's life.

After the absolution, the body is carried to the grave. The tomb or burial plot is then blessed, if it has not been blessed previously. A grave newly dug in an already consecrated cemetery is considered blessed, and requires no further consecration. However, a mausoleum erected above ground or even a brick chamber beneath the surface is regarded as needing blessing when used for the first time. This blessing is short and consists only of a single prayer after which the body is again sprinkled with holy water and incensed. Apart from this, the service at the graveside is very brief.

The final petition made by the priest is "May his soul and the souls of all the faithful departed through the mercy of God rest in peace." At that point, the graveside ceremony and the burial is complete.

Many Catholic families make a donation to the priest in honor of the dead family member. The donation is usually money, but in some cases the family may donate a vestment, Communion ware, i.e. a chalice, a ciborium, and a pyx for the priest to use in his services or for a missionary priest who needs things for his ministry.

Many Catholic families have Requiem Masses said in honor of family members who have died. This is usually offered on the deceased person's birthday, the anniversary of the person's death (especially the first anniversary), and/or on special dates that are meaningful to the family.