Anointing of the Sick (Catholic Church) 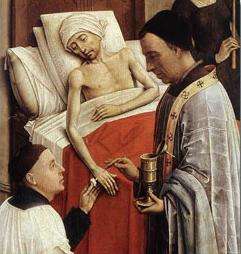 Anointing of the Sick is a sacrament of the Catholic Church that is administered to a Catholic "who, having reached the age of reason, begins to be in danger due to sickness or old age",[1] except in the case of those who "persevere obstinately in manifest grave sin".[2] Proximate danger of death, the occasion for the administration of Viaticum, is not required, but only the onset of a medical condition considered to be a possible prelude to death.[3]

The sacrament is also referred to as Unction, and in the past as Extreme Unction, and it is one of the three sacraments that constitute the last rites (together with the Sacrament of Penance and Viaticum).

The sacrament is administered by a priest, who uses olive oil or another pure plant oil to anoint the patient's forehead and perhaps other parts of the body while reciting certain prayers. It is believed to give comfort, peace, courage and, if the sick person is unable to make a confession, even forgiveness of sins.[4][5][6] Several other churches and ecclesial communities have similar rituals (see Anointing of the Sick for a more general discussion).

"The special grace of the sacrament of the Anointing of the Sick has as its effects:

The chief Biblical text concerning anointing of the sick is James 5:14–15: "Are any among you sick? They should call for the elders of the Church and have them pray over them, anointing them with oil in the name of the Lord. And their prayer offered in faith will heal("save"-KJV)the sick, and the Lord will make them well ("raise him up"-KJV). And if they have committed sins, these will be forgiven." Matthew 10:8, Luke 10:8–9 and Mark 6:13 are also quoted in this regard.

Names for the sacrament

In the past, the usual name of the sacrament in official documents of the Catholic Church was Extreme Unction (meaning, Final Anointing), a name attached to it when it was administered, as one of the "Last Rites". Peter Lombard (died 1160) is the first writer known to have used the term,[10] which did not become the usual name in the West till towards the end of the twelfth century, and never became current in the East.[11] The word "extreme" (final) indicated either that it was the last of the sacramental unctions (after the anointings at Baptism, Confirmation and, if received, Holy Orders) or because at that time it was normally administered only when a patient was in extremis.[10] In the early 1970s the official name was changed to Anointing of the Sick to reflect Church teaching, which had been present in the past.[12][13] "Extreme Unction" continues in popular use among those who prefer to keep the terminology that was customary before the Second Vatican Council (see Traditionalist Catholic).

The sacrament has also been known by various other names in Western Christianity throughout the years, including: the holy oil or unction of the sick; the unction or blessing of consecrated oil; the unction of God; the office of the unction. In the Eastern Church it is technically known as euchelaion (i.e. prayer-oil); but other names such as elaion hagion (holy [oil]), or hegismenon (consecrated), elaion or "olia" [oil], elaiou Chrisis, chrisma, etc." are still common.[11]

In the Catholic Code of Canon Law, Canon 1004 states who may receive the sacrament: "The anointing of the sick can be administered to a member of the faithful who, having reached the use of reason, begins to be in danger due to sickness or old age." When new illness develops or first illness relapses or worsens, the patient may receive the sacrament a further time. Anointing of the Sick may also be given numerous times in the case of old age or chronic illness based on the pastoral judgment of the priest.[14] The sacrament, as any sacrament, can only be given to someone who is alive; however, as the moment when the soul is entirely separated from the body (the traditional definition of death) is not known with precision, people can also be anointed conditionally (the sacramental formula preceded by "if thou art alive") during a brief time after already considered dead in the medicinal sense.

The sacrament of anointing can be administered to an individual whether at home, in a hospital or institution, or in church. Several sick persons may be anointed within the rite, especially if the celebration takes place in a church or hospital. The celebration may also take place during a Catholic Mass.

Relationship with the "Last Rites"

Anointing of the Sick is closely associated with, and often administered during the rituals known as the Last Rites. However, the term "Last Rites" is not equivalent to "Anointing of the Sick", since it refers also to two other distinct rites: Sacrament of Penance and Eucharist, the last of which is known as "Viaticum" (Latin:"provision for the journey") when administered to the dying. The normal order of administration of the rites is: first Penance (if the dying person is physically unable to confess, absolution is given conditionally on the existence of contrition), then Anointing, then Viaticum.

Of the Last Rites, only a priest or bishop can administer the Sacraments of Penance and Anointing of the Sick. In the absence of a priest these sacraments cannot be administered, but a lay person may give a dying person Holy Communion, which in this case is "Viaticum, the Last Sacrament of the Christian".[8][15]

The oil used in the sacrament is usually olive oil, though other oils may also be used.[16] It is blessed by the bishop of the diocese at the Chrism Mass he celebrates on Holy Thursday or on a day close to it. In case of necessity, the priest administering the sacrament may bless the oil within the framework of the celebration.[17]

In the Roman Rite of the Latin Church, the priest anoints the sick person's forehead with oil (usually in the form of a cross), saying: "Through this holy anointing, may the Lord in his love and mercy help you with the grace of the Holy Spirit." He then anoints the hands, saying, "May the Lord who frees you from sin save you and raise you up." He may also, in accordance with local culture and traditions, and the needs of the sick person, anoint other parts of the body, but without repeating the sacramental formula.

This is the form established for the Roman Rite through the papal document Sacram unctionem infirmorum of 1972. The form used in the Roman Rite in the preceding period included anointing of seven parts of the body (though that of the loins was generally omitted in English-speaking countries), while saying (in Latin): "Through this holy anointing, may the Lord pardon you whatever sins/faults you have committed by..." The sense in question was then mentioned: sight, hearing, smell, taste, touch, walking, carnal delectation.[18]