BornholmerFærgen is a Danish ferry company which connected the island of Bornholm to Denmark, Sweden and Germany. Until 2011 known as Bornholmertrafikken, it is now a subsidiary of Danske Færger.

2010The Hammerodde is rebuilt at STX Europe. The Dueodde is sold to New Zealand ferry operator Strait Shipping (Bluebridge). Bornholmstrafikken re-brands as BornholmerFærgen.[1] 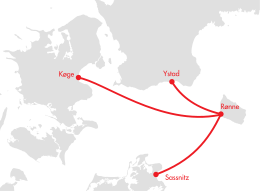 BornholmerFærgen operate three routes from the island of Bornholm. 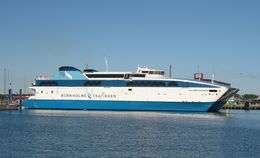 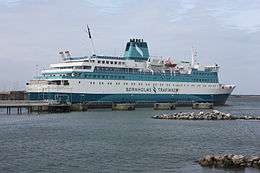 HSC Leonora ChristinaHigh speed catamaran, build in Western Australia. She is in service on the Rønne - Ystad route since June 22, 2011.[3]

MS Povl AnkerThe Povl Anker was built at the Danish Aalborg Shipyard in 1978. She is the oldest vessel in the BornholmerFærgen fleet. The vessel is named after Paul Hansen Anker, who was vicar of Rutsker and Hasle and active in the rebellion against the Swedish government in 1658. BornholmerFærgen plan to keep her in service until 2017 as a reserve ferry.[4] In October 2006, she served as backdrop Paprika Steen’s 2007 movie, With Your Permission. The Povl Anker was classified in 1978 as a I 3/3 E, Deep Sea Car Ferry, ICE II at Bureau Veritas,[5] meaning that she is strengthened for navigation in ice.[6]

HSC Villum Clausen(Launched: 2000) fast ferry (catamaran) Capacity approximately 215 cars and 1055 passengers requiring seats for all. Top speed 48 knots. Recorded in the Guinness Book of Records for its top speed and the longest distance in 24 hours of the voyage from the shipyard Austal Ships in Australia to Denmark. Villum Clausen was the brother of Jens Pedersen Kofod, and it was Villum Clausen, who shot the Swedish commander Johan Printzensköld who tried to escape arrest.

MS HammeroddeBuilt at Merwede shipyard in the Netherlands in 2005. Capacity 1235 lane meters, 400 passengers, 108 berths in 60 cabins. Ice class 1C.[7] The Hammerodde was rebuilt by the STX Europe shipyard in 2010 with an extra vehicle deck at the stern.

MS Dueodde (2005-2010)Sister ship to the Hammerodde. Built in 2005 by Merwede. In September 2010 she was purchased by New Zealand ferry operator Strait Shipping (Bluebridge) and renamed MV Straitsman for service on Cook Strait.[8]

MS Jens Kofod (1979-2005)Sister ship to Povl Anker. Sold to Eckerö Linjen in 2005 for service between Eckerö and Grisslehamn, The vessel was named after Jens Kofod Pedersen, who, like Paul Hansen Anker was active in the struggle against the Swedish government and was a cousin of Villum Clausen.