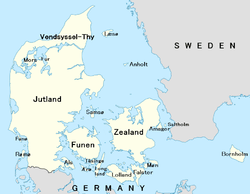 A map showing the Jutland peninsula and most notable larger islands of Denmark.

There are about 406 islands in Denmark, not including the Faroe Islands or Greenland.[1] Some 70 of them are populated but the remainder are uninhabited. Some of the uninhabited islands have only become uninhabited in recent decades, for economic reasons.

Different lists of Danish islands vary, depending on how the word "island" is defined. According to the official Danish Government definition, an "island" needs to be surrounded by water at least one-half metre deep and also have land vegetation growing on it to be recorded as such.[2]

Another common criterion is that an "island" needs to be surrounded by free-flowing, natural water and not just an artificial, narrow canal. According to this criterion, places such as Christianshavn and Holmen in Copenhagen, although sometimes referred to as artificial islands, are actually parts of the island of Amager.

The number of islands in Denmark changes from time to time. New islands are occasionally formed by sedimentation. Several examples of these new islands are found in the waters around Æbelø, north of Funen, including Drætlingen which formed in the late 1990s, and a still unnamed islet that was registered in 2008. These new islands are generally less stable than larger, morainic islands, and may later disappear again. Other islands are created artificially. Peberholm, formed in the process of construction of the Øresund Bridge, is a notable example. Other artificial Danish islands include a number of marine fortresses off Copenhagen, such as Middelgrundsfortet, Trekroner Fort and Flakfortet.

Islands may also disappear. An example of this is Jordsand, one of the Danish Wadden Sea Islands. According to records from 1231, the island then had an area of about 2,000 hectares (8 square miles). After a series of severe storms during that century, its area decreased to around 41 hectares, and by 1763 to around 18 hectares. By December 1999, the European windstorm Cyclone Anatol had destroyed the last piece of the island and Jordsand had ceased to exist.[3]

In other cases, islands are absorbed by larger neighbouring masses of dry land, as a result of either natural sedimentation or artificial land reclamation in the channels separating them. Sometimes this means that an island becomes a cape or headland.

Denmark's second largest island, the North Jutlandic Island, was not always an island. A storm on 3 February 1825 penetrated the narrow land mass, Agger Tange, and thus separated Northern Jutland from the rest of Jutland. The area had earlier been an island, when a strait at Vust had been open prior to the 12th century.

This is a list of the largest islands of Denmark (Press the symbol after the headings in the table to rearrange the list according to population size, location or alphabetically):

Areas sometimes referred to as islands