Scandlines used to be co-owned by the Danish Ministry of Transportation (50%) and Deutsche Bahn AG (50%),[4] but as of June 2007, it was sold to a consortium consisting of 3i Group of London (40%), Allianz Capital Partners (ACP) of Munich (40%) and Deutsche Seereederei (DSR) of Rostock (20%). The consortium bought Scandlines for a total of 1,560 million euros. On 29 October 2010, DSR's 20% share of Scandlines was acquired by 3i Group and ACP. At the end of 2013 3i Group acquired ACP's stake for 165 million euros, becoming the sole owner of Scandlines.

The Scandlines services to Sweden are served in co-operation with Stena Line. Stena Line owns several ships of the Scandlines brand. In June 2012 Stena and Scandlines announced Stena will buy Scandlines Sweden and Baltic services. These will be brought under the Stena Line brand. Scandlines will retain the more passenger focused Denmark services. 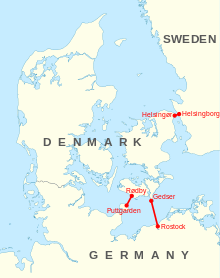 A Scandlines ferry traveling from Puttgarden to Rødby: Prinsesse Benedikte 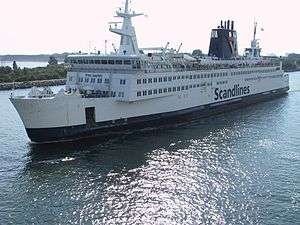