Brian Nelson Calley (born March 25, 1977) is the 63rd and current Lieutenant Governor of Michigan. A member of the Republican Party, Calley served as a member of the Michigan House of Representatives from 2007 to 2011.

Calley is known nationally as a leading figure for autism awareness and advocacy. He has received widespread recognition for sharing his experiences as a father to a daughter with autism and for leading autism insurance reform in Michigan.[1][2]

Calley was born in Dearborn, the third of six children. The family moved from Dearborn Heights to Fort Riley, Kansas in 1982 where his father was stationed in the United States Army. By 1984, the family moved back to Michigan where Calley graduated from Ionia High School in 1994. He earned a bachelor's degree in business administration from Michigan State University in 1998 and a Master’s in Business Administration from Grand Valley State University in 2000. In the 10 years preceding his election to the Michigan legislature, Calley held various positions within the banking industry, primarily making commercial loans. During this time he served two terms on Ionia County Board of Commissioners, both as Vice Chairperson.[3]

Calley was elected to the Michigan House of Representatives in 2006 and re-elected in 2008. He served both terms in the minority, with the 2009-2010 term seeing the smallest Republican caucus in 40 years.[4] In the House he gained a reputation as an expert on tax policy and served as minority vice chair of the House Tax Policy Committee. He was named the 2008 ‘Legislator of the Year” the state’s Small Business Association, the first time a freshman lawmaker has received that designation.[5]

On September 11, 2009, the Michigan Department of Human Services informed a woman living in Calley’s district that an anonymous neighbor had lodged a complaint that she was operating an illegal daycare center in her home.[6] The woman, who was not a licensed daycare provider, had been watching neighborhood children each morning before their school bus arrived and after their parents had left for work for no compensation as an act of kindness. The department informed to woman she could face a $1,000 fine or serve up to 93 days in jail if not licensed.[7]

When Calley was informed of the incident, he introduced legislation to resolve the issue and differentiate between casual babysitting and operating a daycare facility. He called the department’s actions “a shocking case of government bureaucracy run amok."[8] The incident gained national attention resulting in Calley's appearance on NBC’s Today Show with the families involved. On September 29, Granholm instructed department Director Ismael Ahmed to work with Calley and the Legislature to change the law and prevent future issues.[6][9][10]

Calley’s legislation was signed into law on November 20.[11]

Calley declined to seek a third term as state representative. He instead ran for the open 33rd district state Senate seat. He faced a fierce head-to-head primary challenge from Bingham Township Treasurer Michael Trebesh. The primary election became one of Michigan’s most competitive and expensive races. Calley defeated Trebesh 57% to 43%.

On August 25, despite securing the GOP nomination for state Senate days earlier, Calley was announced as gubernatorial candidate Rick Snyder’s running mate. Tea Party supporters from west Michigan momentarily contested Calley’s nomination during the state Republican Convention at Michigan State University’s Breslin Center in favor of Bill Cooper, a Norton Shores businessman and former candidate for Congress. Cooper withdrew his name from consideration and publicly threw his support behind Calley. In securing the nomination for lieutenant governor, the state Senate nomination was vacated and former state Representative Judy Emmons was chosen to fill the spot.[12][13]

Snyder and Calley would go on to defeat Lansing Mayor Virg Bernero and his running mate Southfield Mayor Brenda Lawrence in the general election by 58% to 39%. 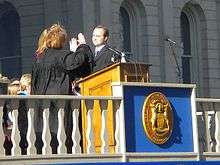 In early 2011 Calley broke a 19-19 deadlock in the Michigan Senate, voting in favor of a massive tax reform package that replaced the Michigan Business Tax with a flat, six-percent corporate income tax and eliminated most of the state’s exemptions and deductions. The Tax Foundation, a conservative tax research group lifted Michigan’s ranking from 49th to 7th.[17]

For two years, he attended weekly classes at the John F. Kennedy School of Government at Harvard University before receiving his Master of Public Administration in spring 2015.[18]

Calley, whose daughter has autism, is known for his outspoken advocacy for autism awareness. As a state lawmaker Calley served on the Health Policy Committee and supported autism insurance reform - unaware his own child actually had the disorder. He stated he first suspected his daughter’s condition during a committee hearing as parents of afflicted children shared their similar experiences.[1][2][19]

As lieutenant governor, Calley is widely credited for leading a successful legislative push to require insurance companies cover evidence based treatments for autism. He signed the bills into law as acting governor while Rick Snyder was on an unannounced trip to Afghanistan. Citing these efforts, Calley was named the 2011 "Executive Champion” by the national autism cure organization Autism Speaks.[1][20]

As Lt. Governor (with Governor)