Founded in 1920 it currently plays in La Liga, holding home games at the 19,800-capacity El Sadar Stadium.[4] The team's home kit is red shirt, navy blue shorts, black socks with red back, whereas the away one is navy blue shirt, orange shorts and navy blue socks.

The word Osasuna means "health" in Basque (used in a sense of "strength", "vigour").

Founded in 1920, Osasuna first reached Segunda División in 1932. They made it to La Liga three seasons later.

The club achieved their first ever UEFA Cup qualification in 1985–86 after finishing sixth, eventually reaching the third round in the 1990–91 edition. Finishing last in 1993–94, the side spent six years in the second level; in 2005 it reached the Copa del Rey final for the first time ever, losing after extra time to Real Betis.[5]

On the 27 November 2005, Osasuna played its 1,000th game in La Liga. After a stellar 2005–06 domestic campaign, Osasuna made history by finishing in fourth place – tied for best ever – synonymous with the chance of qualifying for the UEFA Champions League in the following season through play-off matches. This achievement was made even more dramatic by the suspense that was maintained until the last day of the championship in which Osasuna and Sevilla were both vying for the fourth place – both teams eventually ended the season with the same number of points but Osasuna got through due to their head-to-head record; However, Osasuna didn't make it to the Champions League group phase, as they were eliminated by Hamburg in the third qualifying round, leaving the Navarrese to vie in the UEFA Cup for the fifth time in their history. 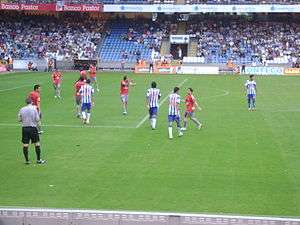 Osasuna playing against Deportivo in 2012.

Osasuna were drawn in Group D of the 2006–07 UEFA Cup along with Parma, Lens, Odense and Heerenveen. The club qualified for the knock-out stage, finishing second in their group, and were drawn against Bordeaux, who had dropped into the UEFA Cup following an unsuccessful Champions League campaign; the Spaniards progressed 1–0 on aggregate, drawing 0–0 away before winning 1–0 in Pamplona through an extra time winner by Javad Nekounam.

Next up were Rangers, and Osasuna again progressed, following a 1–1 draw in Scotland and a 1–0 win at home. They were drawn against German side Bayer Leverkusen in the quarter-finals. Regarded as severe underdogs, they not only progressed to the semifinals but did so in style (a 3–0 away win had virtually sealed the tie, but the Rojillos also won the second leg, 1–0); in the last-four round the club was drawn against holders and fellow Spanish side Sevilla, eventually losing 1–2 on aggregate after a 1–0 home win.

In the following two seasons, Osasuna struggled heavily in the league: in 2008–09, it only avoided relegation in the final day: being in 18th place and going into the final matchday, at home to Real Madrid, they fell behind 0–1, but came back with two goals (the decider courtesy of Juanfran, a Merengue youth graduate) to remain in the top flight.[6]

Osasuna had varied success following those seasons, but struggled again from 2012-2014, being relegated to the second division after an 18th-place finish in 2014. A managerial change resulted in substantial improvement, and Osasuna won the final match of the regular 2015-2016 season away to Real Oviedo 0-5, qualifying for promotion playoffs and finishing sixth in the table. They subsequently won all of their playoff games, v Club Gimnàstic de Tarragona in the preliminary stage and Girona FC in the final stage, to achieve promotion once again to La Liga.

Note: this list includes players that have appeared in at least 100 league games and/or have reached international status.

Osasuna's women's team played seven seasons Segunda División's Groups 1 and 2, usually ending between the 3rd and 6th positions out of 14 teams.[8] In the early 2010s, some controversies arose over the organization's management of the team:[9] in March 2011, eleven players left the team accusing the executives of sexism, lack of interest and poor training conditions,[10] and, in May of the following year, outgoing chairman Patxi Izco declared women's football as unsightly and unsuitable for women.[11]

The team was disbanded in June 2014 in the mid of financial turmoil, weeks after the male team's relegation to Segunda.[12]