Bordeaux was founded in 1881 as a multi-sports club and is one of the most successful football clubs in France. The club has won six Ligue 1 titles, which is the joint fourth-most in its history. Bordeaux have also won four Coupe de France titles, three Coupe de la Ligue titles, and three Trophée des champions titles as well. The club has the honour of having appeared in the most finals in the Coupe de la Ligue, having featured in six of those contested. From a year to its inception, the club's stadium was the Stade Chaban-Delmas, though since 2015, Bordeaux's home ground has been that of the Nouveau Stade de Bordeaux.[5][6]

The club took its name Girondins from a group of French Revolutionaries from the region, and was founded on 1 October 1881 as a gymnastics and shooting club. The club, chaired by André Chavois, later added sports such as rowing, equestrian, and swimming, among others. It was not until 1910 when football was officially introduced to the club following strong urging from several members within the club, most notably club president Raymond Brard, though it was only available on a trial basis. The experiment with football lasted only a year before returning almost a decade later in 1919. The club contested its first official match in 1920 defeating Section Burdigalienne 12–0.[7]

Bordeaux achieved professional status in football on 2 July 1936, partly due to the club's merger with fellow Bordelais outfit Girondins Guyenne Sport, which resulted in the club that exists today. Bordeaux's rise to professionalism came about alongside the French Football Federation's plea to increase professionalism in French football, which prior to 1932, had been non-existent. The club was inserted into the second division of French football and made its debut appearance during the 1937–38 season. The club's first manager was Spaniard Benito Diaz. Diaz brought fellow Spanish players Santiago Urtizberea and Jaime Mancisidor to the team with the latter serving as captain. The club's most prominent Frenchmen on the team were homegrown attacker Henri Arnaudeau and goalkeeper André Gérard. Bordeaux played its first official match on 23 May 1937 defeating Rhône-Alpes-based FC Scionzier 2–1 at the Stade de Colombes. The club's first ever league match was contested on 22 August losing away to Toulouse 3–2. Bordeaux recorded its first league win against Nîmes Olympique. Unfortunately for the club, the team finished 6th in the Southern region of the division. Bordeaux's disappointing finish inserted the club into the relegation playoff portion of the league where the team finished a respectable 3rd. A year later, Bordeaux moved into its current home, the Stade Chaban-Delmas, which had previously been known as, simply Parc Lescure. The facility was built specifically for the 1938 FIFA World Cup and, following the competition's completion, was designated to Bordeaux. The club had formerly played its home matches at the Stade Galin, which today is used as a training ground.[7]

Trophy of the centenary tournament of Girondins de Bordeaux

On 15 October 1940, Bordeaux merged with local club AS Port and took on one of the club's most prestigious traditions, the scapular. Bordeaux ASP, which the club was now known, adorned the scapular during its run to the 1941 edition of the Coupe de France final. The match, played in occupied France at the Stade Municipal in Saint-Ouen, saw Bordeaux defeat SC Fives 2–0 with Urtizberea netting both goals. The Coupe de France triumph was the club's first major honour. Following the liberation of France, Bordeaux returned to league play and earned promotion to the first division following its 2nd-place finish during the 1948–49 season. After the season, André Gérard, now manager of the club, signed Dutchman Bertus de Harder. Led by the three-headed monster of de Harder, Édouard Kargu, and Camille Libar, Bordeaux captured its first-ever league championship, in just the club's first season in the first division, winning by six points over second place Lille. The league success led to Bordeaux being selected to participate in the second edition of the Latin Cup. In the competition, Bordeaux reached the final drawing 3–3 with Portuguese outfit Benfica. The draw forced a second match with Benfica claiming victory following an extra time goal after over two hours and 25 minutes of play.[7]

Bordeaux maintained its title-winning aspirations finishing runners-up to Nice two seasons after winning its first title. The club also performed well in cup competitions reaching the Coupe de France final in 1952 and 1955. In 1952, Bordeaux suffered defeat to the team it finished runner-up to the same year, Nice, following a thrilling match in which eight goals were scored with five of them coming in the first 40 minutes. Bordeaux drew the match at 3–3 following a 55th-minute goal from Henri Baillot, but Nice countered minutes later with two goals in a span of four minutes to go up 5–3, which was the final result. In 1955, Bordeaux were trounced 5–2 by Lille who went up 4–0 within 35 minutes. The resulting struggles in the cup competitions led to struggles domestically with the club suffering relegation in the 1955–56 season. The club returned to the first division for the 1959–60 season, but failed to make an impact falling back to Ligue 2 after finishing dead last in the standings with 21 points.[7]

Bordeaux returned to its former selves in the 1960s under new manager and former player Salvador Artigas. Under the helm of Artigas, Bordeaux returned to the first division and finished in a respectable 4th place for the 1962–63 season. The following season, Bordeaux returned to the Coupe de France final where the club faced off against Olympique Lyonnais. Bordeaux, once again, were defeated 2–0 courtesy of two goals from the Argentine Nestor Combin. The club's runner-up finish resulted in the team qualifying for the 1964–65 Inter-Cities Fairs Cup. The appearance was brief with the club losing 4–3 on aggregate to German club Borussia Dortmund. Four seasons later, Bordeaux again reached the final of the Coupe de France; the club's seventh appearance overall. The team faced Saint-Étienne and, again failed to match the achievement reached in 1941 losing 2–1. The following season, Bordeaux earned another appearance in the final, but again, failed to win the trophy losing 2–0 to Marseille. The team suffered an extreme decline during the 1970s, despite the arrival of Alain Giresse. The club played under seven different managers during the decade and consistently finished at the bottom half of the table. In 1979, the club was sold to the influential and ambitious real estate mogul Claude Bez, who positioned himself as president of the club. In the summer of 1983 Girondins de Bordeaux organised a centenary tournament. Bordeaux won a 2–0 victory over FC Barcelona in the semi-finals of this tournament. In the tournament's final the club was defeated by VfB Stuttgart.[7][8]

Return to prominence in the 80s 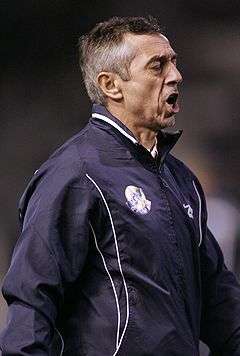 Alain Giresse, influential Bordeaux player in the '70s and '80s.

Under the helm of Claude Bez, who injected millions into the club, Bordeaux flourished winning three league championships, two Coupe de France titles, and also performed well in European competitions. During Bez's run presiding over the team, he recruited several French internationals such as Bernard Lacombe, Jean Tigana, René Girard, Jean-Christophe Thouvenel, and Thierry Tusseau. Bez also brought in established manager Aimé Jacquet. Led by 1970s mainstays Giresse and Gernot Rohr, Bordeaux captured its first league championship since 1950 in the 1983–84 season finishing equal on points with AS Monaco, however, due to having a better head-to-head record, Bordeaux were declared champions. The next season, Bordeaux again won the league claiming the title by four points over second place Nantes. In Europe, Bordeaux played in the 1984–85 European Cup and reached the semi-finals, defeating Spanish club Athletic Bilbao, Romanian club Dinamo Bucureşti, and Soviet outfit Dnipro Dnipropetrovsk before losing to Italian club Juventus. In the Coupe de France, Bordeaux finally achieved cup glory defeating Marseille 2–1 in the 1986 edition of the final with Tigana and Giresse recording both goals. The Coupe de France trophy was the club's first since 1941 after over eight agonising tries in finals. The following season, the club responded by winning the trophy again. In a re-match with Marseille, Bordeaux won its second consecutive cup courtesy of goals from Philippe Fargeon and Zlatko Vujović. Bordeaux then capped off the 1986–87 season by winning its fourth league title and achieving the Ligue 1 and Coupe de France double as well.

In 1989 Bordeaux ended the decade with a consecutive runners up medal in their 1989 Ligue 1 campaign and getting up towards the semi final in a strong European cup run that season.[9]

Rising from the ashes in the 90s

Due to administrative problems the club was relegated just two years thereafter. However in 1992 Les Giridons won that year's Ligue 2 title, thus being elevated to the top tier of French football. In the emergence of young and exciting players such as playmaker Zinedine Zidane, striker Christophe Dugarry and left back Bixente Lizarazu the club ascended even higher to win the UEFA Intertoto Cup of 1995. With this talented trio, the club as well beat AC Milan and Slavia Prague in the quarters and semis respectively, to reach the UEFA Cup final of 1996. Bordeaux witnessed even further glory only three years later, in the club winning their fifth title in that of the 1999 Ligue 1 with winger Sylvain Wiltord winning the Golden Boot of that season with 22 goals.[9]

Within the 1999-00 season, the club played in the new UEFA Champions League for the first time. In two seasons time Bordeaux won another cup final, beating Lorient 3-0 in the 2002 Coupe de la Ligue Final. Les Girondins beat Club Brugge 4-1 on aggregate in the fourth round to reach the 2004 UEFA Cup quarter finals where the club with the chevron went out to eventual cup winners Valencia CF.[9]

In its history, Bordeaux have had 35 managers. The first was the Spaniard Benito Díaz. Diaz was the first Bordeaux manager to achieve an honour when, in 1941, the club won the Coupe de France. The first Bordeaux manager to win the league was André Gérard. Gérard led the team to the league crown in 1950. He also has the honour of being the club's longest-serving manager having spent a decade with the club from 1947–1957. Gérard is followed by Aimé Jacquet who spent nine season with the club in the 80s. Under Jacquet, Bordeaux won three league titles and two Coupe de France titles.