Sociedad Deportiva Eibar (in Basque: Eibar Kirol Elkartea) is a Spanish football club based in Eibar, Gipuzkoa, in the autonomous Basque Country. Founded on 1 January 1940, the team currently plays in La Liga.

The team plays in claret and blue shirt with blue shorts, holding home games at the Estadio Municipal de Ipurua. SD Eibar is a fan-owned club, with more than 10,000 shareholders from 69 countries all over the world.

It is the only football club who has the quality certificate UNE-EN-ISO 9001.[1]

Formed by the merger of Deportivo Gallo and Unión Deportiva Eibarresa, the club was originally known as Eibar Fútbol Club, before changing to Sociedad Deportiva Eibar. Originally an irregular team, it was not until the 1943–44 season that it was reorganised into a more full-time unit.

Promoted to Tercera División in 1950, Eibar achieved promotion to Segunda División three seasons later, being relegated again after a five-year stint and competing in division three for 25 of the following 28 years (in 1977 Tercera became the fourth level, after the creation of Segunda División B). In 1988, the side returned to the "silver category".

Eibar was relegated to the third division at the end of the 2005–06 campaign. However, it won its group the next season, thereby qualifying for the promotion play-offs where it won its semi-final tie against Hospitalet 2–0 and defeated Rayo Vallecano 2–1 on aggregate in the decisive round, sealing its return after just one year.[2] Eibar finished 21st in the 2008–09 season meaning they were relegated to the Segunda Division B.

Eibar qualified for three straight promotion play-offs but could not get promoted to the Segunda Division.

In the 2012–13 edition of the Copa del Rey, Eibar ousted Basque neighbours Athletic Bilbao – who had appeared in two of the last four finals in the tournament – on the away goals rule to reach the round-of-16 following a 1–1 draw at the San Mamés Stadium. The decisive goal was scored by Mikel Arruabarrena who played youth football with the opposition, as did manager Gaizka Garitano;[3] the same season the team managed to return to the "silver category", following a four-year absence.[4]

In 2013–14 Eibar earned, for the first time in its history, one of two direct promotion berths to La Liga,[5] which was certified on 25 May 2014 with a 1–0 home win against Deportivo Alavés.[6] Simultaneously, however, the club was threatened with relegation back to division three due to the financial inability of the S.A.D. to have a share capital of at least €2,146,525.95 before 6 August 2014. The club launched a campaign named Defiende al Eibar (Defend Eibar) with the aim of reaching the required share capital through a seasoned equity offering.[7] On 15 July 2014 the club announced it had reached the established goal.[8]

Eibar finished its first top-flight season in 18th, ending in relegation. However, after the season ended, 13th-placed Elche were sent to the second tier as punishment for financial mismanagement, and Eibar were reinstated.[9]

Eibar, under its new coach José Luis Mendilibar, finished its second top-flight season in 14th. Borja Bastón finished 10th in scoring and was named La Liga player of the month for October. 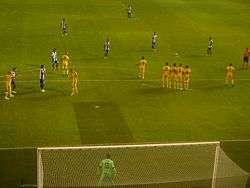 On 18 July 2015, Eibar played its 75th Anniversary game against Celtic in Ipurua (1-4). This included an inaugural ceremony on the pitch with a parade of 19th-century-clothed Basque soldiers with a Saltire and bagpipes playing "Scotland the Brave", with officials from both clubs shooting a 350 kg 19th-century cannon. Eibar stated that they invited Celtic as their opponent for the game due to the strong connection between the Basque Country and Scotland, and also due to the Scottish presence in Eibar through the years (the main supporter group is named "Eskozia la Brava", meaning "Scotland the Brave").[10][11]

Note: this list includes players that have appeared in at least 100 league games and/or have reached international status.