This article is about the Canadian Army base. It should not be confused with the historic RCAF Station Kingston. 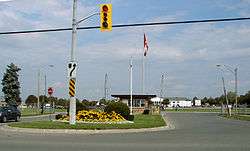 The Barriefield Military Camp, commonly called Camp Barriefield, was established as a military base at the outbreak of the First World War in 1914 on the east bank of the Cataraqui River opposite the city of Kingston in the village of Barriefield. Located north of King's Highway 2, the name of the military base and village was in honour of the Royal Navy's Rear-Admiral Sir Robert Barrie who served during the War of 1812.

In 1937 the base expanded to the south side of King's Highway 2 with the opening of the Vimy Barracks, named in honour of the Battle of Vimy Ridge. The Vimy Barracks became home to the Royal Canadian Corps of Signals which relocated to the Barriefield Military Camp from the Borden Military Camp. The Signal Training Centre, later renamed the Royal Canadian School of Signals was also established at the base.

The Barriefield Military Camp continued to expand as one of Canada's largest training bases when the Royal Canadian Ordnance Corps established a training centre during the Second World War. Following the war, the original part of Barriefield Military Camp on the north side of the King's Highway 2 was renamed the McNaughton Barracks in honour of the Canadian Army's General A.G.L. McNaughton who served during the First and Second World Wars. From 1945-1969 the McNaughton Barracks were host to the Royal Canadian Electrical and Mechanical Engineers School.

In September 1975, Training Command was disbanded and the base was transferred to Canadian Forces Training System. The Royal Military College of Canada, the National Defence College, the Canadian Land Force Command and Staff College and the Canadian Forces School of Communications and Electronics were some of the units supported by the base and under the authority of the commander of CFB Kingston. On September 1, 1988, the 1st Canadian Division Headquarters was established to serve as a staging base for the deployment of troops and materiel on active operations; in this role it supported Operation Friction which was Canada's support to the United Nations for the Persian Gulf War in 1991.

On March 30, 1995, responsibility for CFB Kingston was transferred to Land Force Command, now known as the Canadian Army (since August 2011).

On June 26, 1997, Air Command reorganized by disbanding the 10 Tactical Air Group and replacing this unit with the newly formed 1 Wing. The headquarters for 1 Wing was relocated to CFB Kingston, however, the unit's 6 tactical helicopter squadrons flying the CH-146 Griffon were spread out at Canadian Forces bases across the country.

Primarily a training base, CFB Kingston is home to the following lodger units:

CFB Kingston includes several recognized and classified federal heritage buildings on the Register of the Government of Canada Heritage Buildings.[1]

CFB Kingston received an award from the Ontario Power Authority’s for their leadership in pursuing energy efficiency. CFB Kingston and Direct Energy partnered in 2005 to create the largest Federal Building Initiative project ever conducted in Canada, resulting in a $21-million energy performance contract (EPC) expected to save the base more than $2 million annually in utility costs. At CFB Kingston, energy efficiency measures cover a number of base-wide initiatives, such as lighting upgrades, improved building controls and water conservation.[2]