The historic birthplace of the Royal Canadian Air Force, CFB Borden is home to the largest training wing in the Canadian Armed Forces.[2] The base is run by Canadian Forces Support Training Group (CFSTG) and reports to the Canadian Defence Academy (CDA) in Kingston.

Soldiers training for trench warfare at Camp Borden in 1916.

At the height of the First World War, the Borden Military Camp opened at a location on a glacial moraine west of Barrie in 1916 to train units for the Canadian Expeditionary Force. It was named for Sir Frederick Borden, Minister of Militia.[3] In May 1916, the Barrie and Collingwood companies of the 157th Battalion (Simcoe Foresters), CEF (perpetuated today by The Grey and Simcoe Foresters ), under the command of Lieutenant-Colonel D.H. MacLaren, began construction of the camp.

Camp Borden was selected in 1917 for a military aerodrome, becoming the first flying station of the Royal Flying Corps Canada. During the inter-war period, the aerodrome was used as the training location for the nascent Royal Canadian Air Force (RCAF) and was renamed RCAF Station Borden. Camp Borden's training grounds were expanded in 1938 to house the Canadian Tank School. The Siskins were a Royal Canadian Air Force (RCAF) aerobatic flying team that was established in 1929 at Camp Borden.

During the Second World War, both Camp Borden and RCAF Station Borden became the most important training facility in Canada, housing both army training and flight training, the latter under the British Commonwealth Air Training Plan (BCATP). The BCATP's No. 1 Service Flying Training School (SFTS) was located here until 1946. Relief landing fields were located at Alliston and Edenvale.

A third landing field, known locally as Leach's Field, was operated by Camp Borden from the 1920s to the 1950s. The L-shaped airstrip was rudimentary; the "runways" at Leach's Field utilized the existing ground surface. It was primarily used for touch-and-go flying.

During the Cold War, Borden's importance as an RCAF facility in Ontario declined in favour of CFB Trenton, CFB Uplands and CFB North Bay. However, its use as an army facility stayed consistent until 1970 when a major reorganization of the combat arms' schools resulted in the transfer of the Infantry School and Armoured School to CFB Gagetown in New Brunswick. On the other hand, numerous "purple" (i.e. tri-service) schools were established or expanded from existing service training establishments, including the Canadian Forces School of Administration and Logistics, the School of Aerospace Ordnance Engineering and the Canadian Forces Health Service Training Centre.

The eight surviving Royal Flying Corps hangars at the base have been designated a National Historic Site of Canada.[4][5]

The Ontario Heritage Foundation, Ministry of Culture and Recreation erected a plaque in 1976.

Camp Borden was established during the First World War as a major training centre of Canadian Expeditionary Force battalions. The Camp (including this structure) was officially opened by Sir Sam Hughes, Minister of Militia and Defence, on July 11, 1916, after two months of intensive building. This military reserve, comprising over twenty square miles, was soon occupied by some 32,000 troops. Training facilities were expanded in 1917 with the institution of an air training programme under the Royal Flying Corps, Canada, and the construction of the first Canadian military aerodrome, regarded as the finest military aviation camp in North America. Following the armistice Camp Borden continued as an important army and air force centre and became one of the largest armed forces bases in Canada.[6] 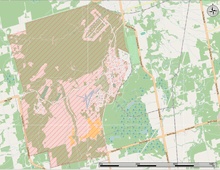 Map of the base.

Although originally an air force training base, CFB Borden is now a training base for several elements of the Canadian Forces:

The Base Borden Military Museum (combining four separate museums) has numerous items, equipment and vehicles from all eras of Canadian military history, including a large number of armoured vehicles and aircraft displayed outside in Worthington Park and around the headquarters area of the base.

In August 2010, the Canadian department of Defence announced a C$209 million series of projects to construct new facilities, and upgrade existing facilities, at CFB Borden.[7]

Only the taxiway and a small section of runway 05/23 remains today (rest is covered with grass), with a helicopter pad at the base of the runway.

The Air Force Annex of the Base Borden Military Museum is dedicated to the memory of First World War Victoria Cross recipient Lieutenant Alan McLeod, the youngest Canadian Airman to receive the award.

CFB Borden has several Federal Heritage buildings on the Register of the Government of Canada Heritage Buildings.[10]