Canadian Forces Base Trenton (IATA: YTR, ICAO: CYTR) (also CFB Trenton) is a Canadian Forces base located within the city of Quinte West, Ontario. It is operated as an air force base by the Royal Canadian Air Force (RCAF) and is the hub for air transport operations in Canada and abroad. Its primary RCAF lodger unit is 8 Wing, commonly referred to as 8 Wing Trenton.

The airport is classified as an airport of entry by Nav Canada and is staffed by the Canada Border Services Agency. The use of the airport for civilian aircraft is permitted for emergencies or MEDEVACs only and the CBSA officers can only handle general aviation aircraft with up to 15 passengers.[1]

The base was in the news in 2010, when its former commander, Colonel Russell Williams, was arrested and later convicted of serial rape and murder; some of his crimes were committed while in command of the base.[3][4] 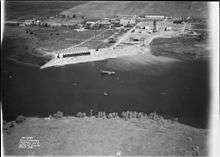 In 1929, 960 acres (390 ha) of farmland near Trenton were purchased by the federal government to establish a Royal Canadian Air Force (RCAF) station to be called RCAF Station Trenton. The base was officially opened in August 1931. Lord Bessborough, the Governor General in 1931, laid the commemorative cornerstone of the airbase, which had the motto, “Per Ardua ad Rem,” or “Through Adversity to the Good” . This motto was the long-standing unspoken motto of the airmen of CFB Trenton.[5] Trenton was intended as a smaller supporting base to RCAF Station Borden, which was the home of Canadian military aviation and a major training base at the time. By June 1937 it had replaced Camp Borden as the primary flying training centre; the older station was given over increasingly to technical and trades training.[6] The location was chosen for being the midpoint between Ottawa and Toronto. It also provided the possibility of using the facility for seaplanes operating on Lake Ontario.

No. 1 Fighter and No. 3 Army Cooperation Flights, flying Siskin and Tiger Moth aircraft, were the first air elements to be hosted at Trenton. Trenton was the largest training centre of the British Commonwealth Air Training Plan during the Second World War.[7] Schools included the RCAF Central Flying School, No. 1 Air Navigation School (to 1942), No. 1 Flying Instructor School, and No. 1 Composite Training School.[8] Along with the trainees, the 6 Repair Depot was based at Trenton. Following the war, Trenton became home to transport and fighter aircraft, with transport aircraft from the base taking part in the Korean Airlift, as well as numerous other missions throughout the 1950s and 1960s.

Canada upgraded its transport and search and rescue fleets during the 1960s when the RCAF purchased the CC-137 Husky, CC-130 Hercules, CH-113 Labrador and CC-115 Buffalo aircraft. RCAF Station Trenton became the home of training facilities for these aircraft.

RCAF Station Trenton was renamed Canadian Forces Base (CFB) Trenton after the February 1, 1968 merger of the RCAF with the Royal Canadian Navy and Canadian Army to form the Canadian Forces.

CFB Trenton has several recognized and classified Federal Heritage buildings on the Register of the Government of Canada Heritage Buildings.[10]

Construction of a new air traffic control tower was completed in July 2010.[12]

A new Material Distribution Centre opened on November 2, 2010. The $2.4-million project is an amalgamation and co-location of the Wing's Central Material Traffic Terminal of 2 Air Movement Squadron (2 Air Mov Sqn) with the material distribution centre of 8 Wing Supply.[14]

The construction of a new northwest ramp and associated taxiway infrastructure, consisting of approximately 82,500 m2 (888,000 sq ft) of concrete and 47,400 m2 (510,200 sq ft) of asphalt surface began in 2009. This recapitalization provides more area for maneuvering, parking and loading aircraft, while providing adequate space to accommodate aircraft.[11]

The Air Mobility Training Centre project will see the construction of a 17,000 m2 (183,000 sq ft) facility that will house the equipment and personnel required to train operators and maintainers of the CC-130J Super Hercules aircraft. Building construction will be completed in 2011 and operations will begin in 2012.[15][16]

A contract for new training accommodations is expected to be awarded in 2010, with construction tentatively set for completion by summer 2012.[15]

Special operations unit JTF2 is in the process of relocating to CFB Trenton and is expected to have facilities there by 2019.

The RCAF operates the majority of its fixed-wing tactical airlift and all of its strategic airlift aircraft from CFB Trenton.

CFB Trenton plays a key support role for the National Search and Rescue Program, being home to Joint Rescue Coordination Centre Trenton (JRCC Trenton) which is jointly staffed by the RCAF and Canadian Coast Guard personnel who have responsibility for coordinating aircraft and marine rescue incidents in central and Arctic Canada. The RCAF also operates the Canadian Mission Control Centre (CMCC) from the base, which is tasked with monitoring the Cospas-Sarsat system that detects transmissions from emergency locating beacons on aircraft or marine vessels in distress through Canada's search and rescue area of responsibility.

8 Wing operates several aircraft types, including CC-130 Hercules, CC-150 Polaris and CC-177 Globemaster III transport aircraft, the CH-146 Griffon search and rescue helicopters, and the CC-144 Challenger VIP transport aircraft. The Challenger fleet, used to fly the Governor General, members of the Royal Family (when visiting Canada), the Prime Minister and members of the federal cabinet, is based at Ottawa Macdonald-Cartier International Airport but supported from CFB Trenton.

Current squadrons under 8 Wing include:

Temporary storage facilities were built at the base for the CC-177 Globemaster III. Permanent hangars will be built by 2013.

The current commander of the base is Colonel C. Keiver, MSM. CD, who assumed his post on August 2015.[17]

CFB Trenton, based on statistical data from the Fiscal Year 2004–2005, had an annual population impact (Regular Force members & dependants) of 8,185. The airbase also had an estimated local spending impact (direct and indirect) of $278,195,000 for that Fiscal Year. The airbase also directly employed 3,163 people and indirectly employed 437 people.[19]