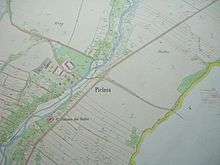 Cadastral map of the village of Pielnia, 1852, Austrian Empire.

A cadastre (also spelled cadaster), using a cadastral survey or cadastral map, is a comprehensive register of the real estate or real property's metes-and-bounds of a country.[1]

In most countries, legal systems have developed around the original administrative systems and use the cadastre to define the dimensions and location of land parcels described in legal documentation. The cadastre is a fundamental source of data in disputes and lawsuits between landowners.

In the United States, Cadastral Survey within the Bureau of Land Management (BLM) maintains records of all public lands. Such surveys often require detailed investigation of the history of land use, legal accounts, and other documents.

A cadastre commonly includes details of the ownership, the tenure, the precise location (therefore GNSS coordinates are not used due to errors such as multipath),[2] the dimensions (and area), the cultivations if rural, and the value of individual parcels of land. Cadastres are used by many nations around the world, some in conjunction with other records, such as a title register.[1]

The International Federation of Surveyors defines cadastre as follows:[3]

A Cadastre is normally a parcel based, and up-to-date land information system containing a record of interests in land (e.g. rights, restrictions and responsibilities). It usually includes a geometric description of land parcels linked to other records describing the nature of the interests, the ownership or control of those interests, and often the value of the parcel and its improvements.

The word cadastre came into English through French from Late Latin capitastrum, a register of the poll tax, and the Greek κατάστιχον katastikhon, a list or register, from κατὰ στίχον kata stikhon—literally, "down the line", in the sense of "line by line" along the directions and distances between the corners mentioned and marked by monuments in the metes and bounds.

The word forms the adjective cadastral, used in public administration, primarily for ownership and taxation purposes. The terminology for cadastral divisions may include counties, parishes, ridings, hundreds, sections, lots, blocks and city blocks.

Other languages have kept the original t sound in the second syllable (examples: Italian catasto, German Kataster, Czech katastr, Spanish catastro). In modern Greek, though, it has been replaced by κτηματολόγιο /ktimato'logio/.

Some of the earliest cadasters were ordered by Roman Emperors to recover state owned lands that had been appropriated by private individuals, and thereby recover income from such holdings. One such cadaster was done in 77 AD in Campania, a surviving stone marker of the survey reads "The Emperor Vespasian, in the eighth year of his tribunician power, so as to restore the state lands which the Emperor Augustus had given to the soldiers of Legion II Gallica, but which for some years had been occupied by private individuals, ordered a survey map to be set up with a record on each 'century' of the annual rental".[4] In this way Vespasian was able to reimpose taxation formerly uncollected on these lands.[4]

With the fall of Rome the use of cadastral maps effectively discontinued. Medieval practice used written descriptions of the extent of land rather than using more precise surveys. Only in the sixteenth and early seventeenth centuries did the use of cadastral maps resume, beginning in the Netherlands. With the emergence of capitalism in Renaissance Europe the need for cadastral maps reemerged as a tool to determine and express control of land as a means of production. This took place first privately in land disputes and later spread to governmental practice as a means of more precise tax assessment.[4] 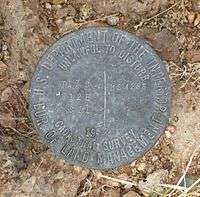 Cadastral surveys document the boundaries of land ownership, by the production of documents, diagrams, sketches, plans (plats in USA), charts, and maps. They were originally used to ensure reliable facts for land valuation and taxation. An example from early England is the Domesday Book in 1086. Napoleon established a comprehensive cadastral system for France that is regarded as the forerunner of most modern versions.

The Public Lands Survey System is a cadastral survey of the United States originating in legislation from 1785, after international recognition of the United States. The Dominion Land Survey is a similar cadastral survey conducted in Western Canada begun in 1871 after the creation of the Dominion of Canada in 1867. Both cadastral surveys are made relative to principal meridian and baselines. These cadastral surveys divided the surveyed areas into townships, square land areas of approximately 36 square miles (six miles by six miles; some very early surveys in Ohio created 25 square mile townships when the design of the system was being explored). These townships are divided into sections, each approximately one-mile square. Unlike in Europe this cadastral survey largely preceded settlement and as a result greatly influenced settlement patterns. Properties are generally rectangular, boundary lines often run on cardinal bearings, and parcel dimensions are often in fractions or multiples of chains. Land descriptions in Western North America are principally based on these land surveys.

Cadastral survey information is often a base element in Geographic Information Systems (GIS) or Land Information Systems (LIS) used to assess and manage land and built infrastructure. Such systems are also employed on a variety of other tasks, for example, to track long-term changes over time for geological or ecological studies, where land tenure is a significant part of the scenario.

A cadastral map is a map that shows the boundaries and ownership of land parcels. Some cadastral maps show additional details, such as survey district names, unique identifying numbers for parcels, certificate of title numbers, positions of existing structures, section or lot numbers and their respective areas, adjoining and adjacent street names, selected boundary dimensions and references to prior maps.

Comprises the documentary materials submitted to cadastre or land administration offices for renewal of cadastral recordings. Cadastral documentation is kept in paper and/or electronic form.[6] Jurisdiction statutes and further provisions specify the content and form of the documentation,[7] as well as the person(s) authorized to prepare and sign the documentation, including concerned parties (owner, etc.), licensed surveyors and legal advisors. The office concerned reviews the submitted information; if the documentation does not comply with stated provisions, the office may set a deadline for the applicant to submit complete documentation.[8][9]

Despite the age of Cadastre, the notion of Cadastral documentation emerged late in the English language, as the institution of cadaster developed outside English-speaking countries. In a Danish textbook, one out of 15 chapters regards the Form and content of documents concerning subdivision, etc.[10] Early textbooks of international scope focused on recordings in terms of land registration and technical aspects of cadastral survey, yet note that 'cadastral surveying has been carried out within a tight framework of legislation'.[11][12] With the view of assessing transaction costs, a European project: Modelling real property transactions (2001-2005) charted procedures for the transfer of ownership and other rights in land and buildings.[13] Cadastral documentation is described, e.g. for Finland as follows '8. Surveyor draws up cadstral map and cadastral documents .. 10. Surveyor sends cadastral documents to cadastral authority.' [14] In Australia, similar activities are referred to as 'lodgement of plans of subdivision at land titles offices' [15]