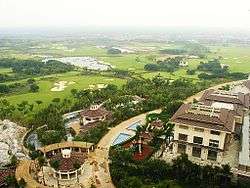 Mission Hills Haikou in Hainan Province is a golf resort under-construction which will be the world's largest when completed.

Golf in China is a growing industry, with numerous golf courses being established, especially in the province of Hainan. There are around 358,000 core players (Aged over 18 and play more than 8 rounds a year) among Chinese population, with a growth rate of 7.5%.[1] That figure is projected to grow to about 20 million by 2020.[2] For the general public, golf is considered to be prohibitively expensive. However, it is seen as the top recreational sport for businesspeople and officials.

The sport attracts both foreign investment and overseas golfers, who come from such countries as South Korea, Australia, and Japan for the relatively inexpensive fees.

China holds such tournaments as the WGC-HSBC Champions in Shanghai, TCL Classic on Hainan Island, the Volvo China Open and the BMW Asian Open.

Among the country's most successful golfers are Zhang Lianwei and Liang Wen-Chong.

The Xuande Emperor playing a game that looks like golf, called chuiwan

Chuiwan, a stick and ball game with some similarities to golf was played in China as early as 1000 AD, with evidence existing from the Song dynasty.[3]

The sport was banned up until the middle of the 1980s by the Communist Party of China as being too bourgeois.[4]

The first golf course constructed in China opened in 1984. It was the Chung Shan Hot Springs in Zhongshan, based on a design by Arnold Palmer.[5]

The first international tournament held in China was the 1995 World Cup at Mission Hills in Guangdong province.[5]

China's first regularly scheduled tournament was the 2004 BMW Asian Open. In 2005, the Volvo China Open was held in China, followed by the HSBC Champions in 2006.[5]

At the 2007 National People's Congress, acknowledging that the construction of new golf courses is not only a waste of public money, but also an illegal use of space, Premier Wen Jiabao said to the Congress that contracts in building new golf courses should be highly discouraged. The government currently imposes a 24 percent tax on golf clubs.[5] In October 2015, the Chinese Communist Party banned all its members from joining golf clubs among other displays of extravagance as part of China's anti-corruption campaign.[7]

Green fees and memberships in China are often expensive relative to developed nations. Average green fees for non-members are usually at least $100 USD, and often far more expensive. For example, at the Tomson Shanghai Pudong Golf Club, home to the BMW Asian Open on the European Tour, the initiation fee $170,000 with $1,800 a year dues. Condos sell for $22 million.[5] The green fee for guest golfers is $125 plus caddie on weekdays, and $180 plus caddie on weekends.[5] At that particular club, however, out of the 700 members, 300 are from overseas. At Shanghai's Sheshan International Golf Club where such tournaments as the HSBC Champions is played, the initiation fee is $230,000.[5]

There are currently about 500 golf courses in the country, the first of which was constructed in 1984. Mission Hills is one of the leading firms, owning courses around the country. Its Mission Hills Golf Club near Shenzhen has 12 courses, making it the world's largest golfing complex. 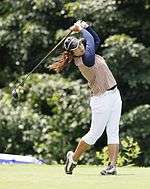 Shanshan Feng during a practice round before the 2009 LPGA Championship, June 10, 2009, Havre de Grace, Maryland.

Numerous world-class players have emerged from China, including:

Hainan is exempt from the nationwide ban on the creation of new golf courses. In the province, the leader in course construction is Mission Hills, having created 10 courses.[2]

Under construction since 2006, the Mission Hills Haikou is a multibillion-dollar project. This 80 km² complex (1.5 times the size of Manhattan), opened in 2011,[8] will contain 22 golf courses and luxury hotels when fully built out.[9] It will be one of the largest golf complexes in the world. The resort became the host of the World Cup starting in 2011.

This article is issued from Wikipedia - version of the 12/24/2015. The text is available under the Creative Commons Attribution/Share Alike but additional terms may apply for the media files.