This article is about the golf association. For the political party, see Libertarian Party of Georgia.

The Ladies Professional Golf Association (LPGA) is an American organization for female professional golfers. The organization is headquartered in Daytona Beach, Florida, and is best known for running the LPGA Tour, a series of weekly golf tournaments for elite female golfers from around the world.

The LPGA also administers an annual qualifying school similar to that conducted by the PGA Tour. Depending on a golfer's finish in the final qualifying tournament, she may receive full or partial playing privileges on the LPGA Tour. In addition to the main LPGA Tour, the LPGA also owns and operates the Symetra Tour, formerly the Futures Tour, the official developmental tour of the LPGA. Top finishers at the end of each season on that tour receive playing privileges on the main LPGA Tour for the following year.

In its 63rd season in 2012, The LPGA is the oldest continuing women's professional sports organization in the United States.[4][5] It was founded in 1950 by a group of 13 golfers: Alice Bauer, Patty Berg, Bettye Danoff, Helen Dettweiler, Marlene Bauer Hagge, Helen Hicks, Opal Hill, Betty Jameson, Sally Sessions, Marilynn Smith, Shirley Spork, Louise Suggs, and Babe Zaharias.[3] The LPGA succeeded the WPGA (Women's Professional Golf Association), which was founded in 1944 but stopped its limited tour after the 1948 season and officially ceased operations in December 1949.[6]

In 2001, Jane Blalock's JBC Marketing established the Women's Senior Golf Tour, now called the Legends Tour, for women professionals aged 45 and older. This is affiliated with the LPGA, but is not owned by the LPGA.

Michael Whan became the eighth commissioner of the LPGA in October 2009, succeeding the ousted Carolyn Bivens.[5][7] Whan is a former marketing executive in the sporting goods industry.[8]

In its first four decades, the LPGA Tour was dominated by American players. Sandra Post of Canada became the first player living outside the United States to gain an LPGA tour card in 1968. The non-U.S. contingent is now very large. The last time an American player topped the money list was in 1993, the last time an American led the tour in tournaments won was in 1996, and from 2000 through 2009, non-Americans won 31 of 40 major championships. 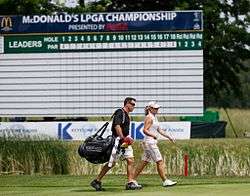 Kristy McPherson during her practice round before the 2009 LPGA Championshipat Bulle Rock Golf Course in Maryland.

Most of the LPGA Tour's events are held in the United States. In 2010, two tournaments were played in Mexico and one each in Singapore, Canada, France, England, Malaysia, South Korea, Thailand, and Japan. Unofficial events were also held in Brazil and Jamaica. In 2011, the unofficial Jamaica event was dropped and a tournament in Mexico was canceled months in advance over security concerns. The Women's British Open rotated from England to Scotland and all other countries retained their tournaments. In addition, events were added in China and Taiwan, while the biennial USA–Europe team competition, the Solheim Cup was played in Ireland. (The new event in China was postponed and ultimately canceled.)

The LPGA's annual major championships are:

From 2006 through 2008 the LPGA schedule was divided into two halves, with 15 players from each half qualifying for the Championship based on their performance. Two wild-card selections were also included for a final field of 21 players. The winner of the LPGA Tour Championship, which features three days of "playoffs" plus the final championship round, earns $1 million.

In 2009, the Tour Championship field was increased to 120 players, with entry open to all Tour members in the top 120 on the money list as of three weeks prior to the start of the tournament. The total purse was $1.5 million with $225,000 going to the winner.

The CME Group Titleholders, which resurrects the name of a former LPGA major championship (the Titleholders Championship), was first played in 2011. From 2011 to 2013, its field was made up of three qualifiers from each official tour event during the season, specifically the top three finishers not previously qualified. Beginning in 2014, the field will be determined by a season-long points race. The winner of the points race will receive a $1 million bonus.[12]

Through the conclusion of the CME Group Tour Championship on November 20.

The LPGA established the Hall of Fame of Women's Golf in 1951, with four charter members: Patty Berg, Betty Jameson, Louise Suggs, and Babe Zaharias. After being inactive for several years, the Hall of Fame moved in 1967 to its first physical premises, in Augusta, Georgia, and was renamed the LPGA Tour Hall of Fame. In 1998 it merged into the World Golf Hall of Fame.

The LPGA Tour presents several annual awards. Three are awarded in competitive contests, based on scoring over the course of the year.

American golfer Nancy Lopez, in 1978, is the only player to win all three awards in the same season. Lopez was also the Tour's top money earner that season.

The table below shows the top 10 career money leaders on the LPGA Tour (from the start of their rookie seasons) as of the 2015 season.[14]