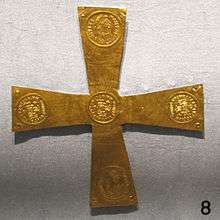 A small cross of gold foil, with rubbings of coins of Justin II and holes for nails or thread, Italian, 6th century

Caesaropapism /ˌsiːzəroʊˈpeɪpɪzəm/ is the idea of combining the power of secular government with the religious power, or making it superior to the spiritual authority of the Church; especially concerning the connection of the Church with government. The term caesaropapism (Cäseropapismus) may first have been coined by Justus Henning Böhmer,[1] and was later defined by Max Weber as "a secular, caesaropapist ruler... exercises supreme authority in ecclesiastic matters by virtue of his autonomous legitimacy". According to Weber's political sociology, caesaropapism entails "the complete subordination of priests to secular power."[2]

In its extreme form, caesaropapism is a political theory in which the head of state, notably the Emperor ('Caesar', by extension a 'superior' King), is also the supreme head of the church ('papa', pope or analogous religious leader). In this form, it inverts theocracy (or hierocracy in Weber) in which institutions of the Church control the state. However, both Caesaropapism and Theocracy are systems in which there is no separation of church and state and the two form parts of a single power structure.

Caesaropapism in the Eastern Church

Icon depicting the Roman Emperor Constantine (centre) and the bishops of the First Council of Nicaea (325) holding the Niceno–Constantinopolitan Creed of 381.

Caesaropapism's chief example is the authority the Byzantine (East Roman) Emperors had over the Church of Constantinople or Eastern Christian Church from the 330 consecration of Constantinople through the tenth century.[3][4] The Byzantine Emperor would typically protect the Eastern Church and manage its administration by presiding over Ecumenical Councils and appointing Patriarchs and setting territorial boundaries for their jurisdiction.[5] The Emperor exercised a strong control over the ecclesiastical hierarchy, and the Patriarch of Constantinople could not hold office if he did not have the Emperor's approval.[6] Eastern men like St. John Chrysostom, Patriarch of Constantinople[5] and St. Athanasius, Patriarch of Alexandria, strongly opposed imperial control over the Church, as did Western theologians like St. Hilary and Hosius, Bishop of Córdoba.[7] Such Emperors as Basiliscus, Zeno, Justinian I, Heraclius, and Constans II published several strictly ecclesiastical edicts either on their own without the mediation of church councils, or they exercised their own political influence on the councils to issue the edicts.[8]

However, John Meyendorff has stated: "Caesaropapism ... never became an accepted principle in Byzantium."[9] Several saints resisted the imperial power as a consequence of their witness to orthodoxy, such as Maximus the Confessor. In addition, at several occasions imperial decrees had to be withdrawn as the people of the Church, both lay people, monks and priests, refused to accept inventions at variance with the Church's customs and beliefs. These events show that the power over the Church really was in the hands of the Church itself – not in the emperor.[10]

Caesaropapism was most notorious in the Tsardom of Russia when Ivan IV the Terrible assumed the title Czar in 1547 and subordinated the Russian Orthodox Church to the state.[11] This level of caesaropapism far exceeded that of the Byzantine Empire.[12] Caesaropapism in Russia was taken to a new level in 1721, when Peter the Great abolished the patriarchate and formally made the church a department of his government formally known as the beginning of the Russian Empire.

However, in no way is caesaropapism a part of Orthodox dogma. The historical reality, as opposed to doctrinal endorsement or dogmatic definition, of caesaropapism stems from, according to Metropolitan Kallistos Ware, the confusion of the Byzantine Empire with the Kingdom of God and the zeal of the Byzantines "to establish here on earth a living icon of God's government in heaven."[13]

Caesaropapism in the Western Church

The Byzantine Papacy was a period of Byzantine domination of the papacy from 537 to 752, when popes required the approval of the Byzantine Emperor for episcopal consecration, and many popes were chosen from the apocrisiarii (liaisons from the pope to the emperor) or the inhabitants of Byzantine Greece, Byzantine Syria, or Byzantine Sicily. Justinian I conquered the Italian peninsula in the Gothic War (535–554) and appointed the next three popes, a practice that would be continued by his successors and later be delegated to the Exarchate of Ravenna.

Analogue in the Church of England

When Henry VIII of England declared the Church of England to exist as an entity separate from and independent of the Roman Catholic Church, he declared himself to be the "Supreme Head" of that church, to which declaration the English Parliament acceded by passing the Act of Supremacy 1534 at Henry's behest. When Elizabeth I assumed the throne, she replaced the title "Supreme Head" with that of "Supreme Governor," a change both conciliatory to English Roman Catholics on a political level and reflecting a shift toward a more metaphysically and theologically modest stance involving only a claim to supreme authority over the Church of England's conduct in temporal matters. Since then, the monarchs of England, of Great Britain, and of the United Kingdom have claimed the "Supreme Governor" status as well as the title of Defender of the Faith (which was originally bestowed on Henry VIII by Pope Leo X but later revoked by Pope Paul III).