For other uses, see Camphor (disambiguation).

Camphor (/ˈkæmfər/) is a waxy, flammable, white or transparent solid with a strong aroma.[5] It is a terpenoid with the chemical formula C10H16O. It is found in the wood of the camphor laurel (Cinnamomum camphora), a large evergreen tree found in Asia (particularly in Sumatra, Indonesia and Borneo) and also of the unrelated kapur tree, a tall timber tree from the same region. It also occurs in some other related trees in the laurel family, notably Ocotea usambarensis. The oil in rosemary leaves (Rosmarinus officinalis), in the mint family, contains 10 to 20% camphor,[6] while camphorweed (Heterotheca) only contains some 5%.[7] Camphor can also be synthetically produced from oil of turpentine. It is used for its scent, as an ingredient in cooking (mainly in India), as an embalming fluid, for medicinal purposes, and in religious ceremonies. A major source of camphor in Asia is camphor basil (the parent of African blue basil).

The molecule has two possible enantiomers as shown in the structural diagrams. The structure on the left is the naturally occurring (R)-form, while its mirror image shown on the right is the (S)-form.

Norcamphor is a camphor derivative with the three methyl groups replaced by hydrogen.

The word camphor derives from the French word camphre, itself from Medieval Latin camfora, from Arabic kafur, ultimately from Sanskrit, कर्पूरम् / karpūram.[8] Camphor was well known in ancient India during the Vedic period. In Old Malay it is known as kapur Barus, which means "the chalk of Barus". Barus was the name of an ancient port located near modern Sibolga city on the western coast of Sumatra island.[9] This port traded in camphor extracted from laurel trees (Cinnamonum camphora) that were abundant in the region. Even now, the local tribespeople and Indonesians in general refer to aromatic naphthalene balls and moth balls as kapur Barus. 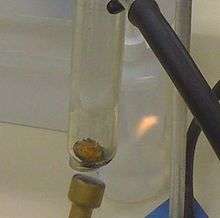 A sample of sublimed camphor

In the 19th century, it was known that nitric acid oxidizes camphor into camphoric acid. Haller and Blanc published a semisynthesis of camphor from camphoric acid. Although they demonstrated its structure, they were unable to prove it. The first complete total synthesis of camphoric acid was published by Gustaf Komppa in 1903. Its inputs were diethyl oxalate and 3,3-dimethylpentanoic acid, which reacted by Claisen condensation to yield diketocamphoric acid. Methylation with methyl iodide and a complicated reduction procedure produced camphoric acid. William Perkin published another synthesis a short time later. Previously, some organic compounds (such as urea) had been synthesized in the laboratory as a proof of concept, but camphor was a scarce natural product with a worldwide demand. Komppa realized this and began industrial production of camphor in Tainionkoski, Finland, in 1907.

Camphor can be produced from alpha-pinene, which is abundant in the oils of coniferous trees and can be distilled from turpentine produced as a side product of chemical pulping. With acetic acid as the solvent and with catalysis by a strong acid, alpha-pinene readily rearranges into camphene, which in turn undergoes Wagner-Meerwein rearrangement into the isobornyl cation, which is captured by acetate to give isobornyl acetate. Hydrolysis into isoborneol followed by oxidation gives racemic camphor. By contrast, camphor occurs naturally as D-camphor, the (R)-enantiomer.

Camphor can also be reduced to isoborneol using sodium borohydride.

In 1998, K. Chakrabarti and coworkers from the Indian Association for the Cultivation of Science, Kolkata, prepared diamond thin film using camphor as the precursor for chemical vapor deposition.[10]

The sublimating capability of camphor gives it several uses.

Camphor is used as a plasticizer for nitrocellulose, an ingredient for fireworks and explosive munitions. During the late 19th Century, as Western manufacturers developed machine guns and other rapid fire ordnance, it became imperative to reduce the smoke that obscured battlefields and revealed hidden gun emplacements. Camphor was an essential component in the production of smokeless gunpowder. Also, the new smokeless powder did not foul the weapons as much as conventional gunpowder.[12]

Camphor is believed to be toxic to insects and is thus sometimes used as a repellent.[13] Camphor is used to make mothballs. Camphor crystals are sometimes used to prevent damage to insect collections by other small insects. It is kept in clothes used on special occasions and festivals, and also in cupboard corners as a cockroach repellent.

Camphor is also used as an antimicrobial substance. In embalming, camphor oil was one of the ingredients used by ancient Egyptians for mummification.[14]

Solid camphor releases fumes that form a rust-preventative coating and is therefore stored in tool chests to protect tools against rust.[15]

In ancient and medieval Europe, camphor was used as an ingredient in sweets. It was used in a wide variety of both savory and sweet dishes in medieval Arabic language cookbooks, such as al-Kitab al-Ṭabikh compiled by ibn Sayyâr al-Warrâq in the 10th century,[16] and an anonymous Andalusian cookbook of the 13th century.[17] It also appears in sweet and savory dishes in a book written in the late 15th century for the sultans of Mandu, the Ni'matnama.[18] An early international trade in it made camphor widely known throughout Arabia in pre-Islamic times, as it is mentioned in the Quran 76:5 as a flavoring for drinks.[19] By the 13th century, it was used in recipes everywhere in the Muslim world, ranging from main dishes such as tharid and stew to desserts.[17]

Currently, camphor is used as a flavoring, mostly for sweets, in Asia. It is widely used in cooking, mainly for dessert dishes, in India where it is known as kachha karpooram or "pachha karpoora" ("crude/raw camphor"), in (Telugu:పచ్చ కర్పూరo), (Tamil:பச்சைக் கற்பூரம்), (Kannada:ಪಚ್ಚ ಕರ್ಪೂರ), and is available in Indian grocery stores where it is labeled as "edible camphor".

Camphor is readily absorbed through the skin, producing either a coolness or warmth sensation,[20][21] and acts as slight local anesthetic and antimicrobial substance.

Camphor is an active ingredient (along with menthol) in vapor-steam products, such as Vicks VapoRub. It is used as a cough suppressant[22] and as a decongestant.[22]

Camphor may also be administered orally in small quantities (50 mg) for minor heart symptoms and fatigue.[23] Through much of the 1900s this was sold under the trade name Musterole; production ceased in the 1990s.

Camphor was used in ancient Sumatra to treat sprains, swellings, and inflammation.[24] Camphor is a component of paregoric, an opium/camphor tincture from the 18th century. Also in the 18th century, camphor was used by Auenbrugger in the treatment of mania.[25] Based on Hahnemann's writings, camphor (dissolved in alcohol) was also successfully used to treat the 1854-1855 cholera epidemics in Naples.[26]

It has long been used as a medical substance in ancient India, where it generally goes by the name Karpūra. It has been described in the 7th-century Āyurvedic work Mādhavacikitsā as being an effective drug used for the treatment of fever. The plant has also been named Hima and has been identified with the plant Cinnamomum camphora. According to the Vaidyaka-śabda-sindhu, it is one of the “five flavours” used in betel-chewing, where it is also referred to as Candrabhasma (‘moon powder’).

Its effects on the body include tachycardia (increased heart rate), vasodilation in skin (flushing), slower breathing, reduced appetite, increased secretions and excretions such as perspiration and urination. [27]

The sensation of heat or cold that camphor produces is caused by activating the ion channel TRPV3.[20][21]

In 1980, the US Food and Drug Administration set a limit of 11% allowable camphor in consumer products, and banned products labeled as camphorated oil, camphor oil, camphor liniment, and camphorated liniment (except "white camphor essential oil", which contains no significant amount of camphor). Since alternative treatments exist, medicinal use of camphor is discouraged by the FDA, except for skin-related uses, such as medicated powders, which contain only small amounts of camphor.

Camphor is widely used in Hindu religious ceremonies. It is put on a stand called 'karpur dāni' in Bengali and aarāti is performed after setting fire to it.