The 2¢ Large Queen on laid paper is the rarest postage stamp of Canada. Printed in 1868, it was not discovered until 1925, and so far only three have been found, all used. Many more could exist as at least one sheet must have been printed, and possibly many sheets; however, they may all have been destroyed, or lie unrecognised in stamp collections or on cover.

The Large Queens were the first issue by the Dominion of Canada; they are so-called to distinguish them from the 1870 issues (the "Small Queens") which are similar in appearance but physically smaller. The Large Queens were normally printed on wove paper, but the 1¢, 2¢, and 3¢ values were also printed on the less-desirable laid paper. The 1¢ and 3¢ on laid paper were long-known although uncommon.

The stamp was first reported in 1925, although many authorities were dubious, and the Scott catalog did not list it until the 1930s. According to a 2014 BNA Topics First Quarter article by Glenn Archer, the second known example bears a two-ring 5 numeral cancel and was discovered in 1935 in the estate of English stamp dealer JW Westhorpe. According to an 18 November 1971 Globe and Mail article by Douglas Patrick, this example sold for $25,000 to New York dealer Robert Lyman, in the J.N. Sissons' Firth collection auction. In 1986, Vancouver stamp dealer Daniel Eaton acquired this 2c Laid Paper from Stanley Gibbons in London and sold it to Los Angeles stamp dealer George Holschauer for $90,000. The 1971 Globe and Mail article says A.L. Michael of Stanley Gibbons was the underbidder in the 1971 auction. According to Eaton, Gibbons sold the stamp in 1986 on behalf of John Dupont, who collected Canadian stamps using the alias John Foxbridge. 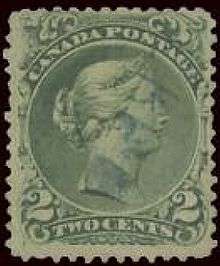 The second copy of the stamp, with Registered cancel.

Kasimir Bileski purchased the second copy of the stamp in the Lewis Reford sale of October 1950 for $3,800.[1] This copy had also been in the Ferrary collection. Daniel Eaton acquired the stamp from Kasimir Bileski then sold/traded this example to John Jamieson for $150,000. Jamieson sold it to Robert Darling, Jr. In 1998 it eventually wound up in the award-winning Ron Brigham collection.

A certificate from The Royal Philatelic Society, London Expert Committee states the Following:

Image reference: Confederation, The Newsletter of the Large and Small Queens Study Group, Number 7, March 1998, pg.4. (This is a study group of the British North American Philatelic Society and .pdf copies of the news letter are available on their website)

It was announced on 16 July 2013 that the Greene Foundation had issued a certificate of genuineness to a Canada Two Cent Large Queen stamp on laid paper, Scott number 32. This is only the third known copy of this stamp and the first copy seen since the two existing copies were expertized in 1935 by the Royal Philatelic Society London.[3] According to a cover story in Canadian Stamp News, the third 2c Laid Paper was found in an American Philatelic Society salesbook and purchased for less than $5.

The above about the third copy is confirmed by Michael D. Smith.