List of people on the postage stamps of the Canadian provinces

Before joining confederation five Canadian provinces issued their own stamps. All of them used the stamps of Canada from the date of joining. The listings below are believed to be reasonably complete.

Although British Columbia is now a single province, it and Vancouver Island were in fact separate colonies for some of the short stamp issuing period. 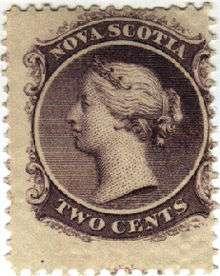 Nova Scotia stamp with the head of Queen Victoria.