The wordmark of the Government of Canada

The Government of Canada, French: Gouvernement du Canada, or more formally Her Majesty's Government[1][2][3] (French: Gouvernement de Sa Majesté), is the federal administration of Canada. It is based in the national capital of Ottawa, Ontario. The head of government is Prime Minister Justin Trudeau, whose party the Liberal Party of Canada won the majority of seats in the Canadian Parliament in the 2015 Canadian federal election.

In Canadian English, the term can mean either the collective set of institutions or specifically the Queen-in-Council. In both senses, the construct was established at Confederation—through the Constitution Act, 1867—as a federal constitutional monarchy, wherein the Canadian Crown acts as the core, or "the most basic building block,"[4] of its Westminster-style parliamentary democracy.[5] The Crown is thus the foundation of the executive, legislative, and judicial branches of the Canadian government.[6][7][8] Further elements of governance are outlined in the rest of the Canadian constitution, which includes written statutes, court rulings, and unwritten conventions developed over centuries.[9]

In Canadian English, the word government is used to refer both to the whole set of institutions that govern the country (as in American usage, but where Britons would use state), and to the current political leadership (as in British usage, but where Americans would use administration).

In federal department press releases, the government has sometimes been referred to by the phrase [last name of prime minister] Government; this terminology has been commonly employed in the media.[10] In late 2010, an informal instruction from the Office of the Prime Minister urged government departments to consistently use in all department communications the term (at that time Harper Government) in place of Government of Canada.[11] The same cabinet earlier directed its press department to use the phrase Canada's New Government.[10]

As per the Constitution Acts of 1867 and 1982, Canada is a constitutional monarchy, wherein the role of the reigning sovereign is both legal and practical, but not political.[12] The Crown is regarded as a corporation sole, with the monarch, vested as she is with all powers of state,[13] at the centre of a construct in which the power of the whole is shared by multiple institutions of government acting under the sovereign's authority.[14][15][16] The executive is thus formally called the Queen-in-Council, the legislature the Queen-in-Parliament, and the courts as the Queen on the Bench.[7] 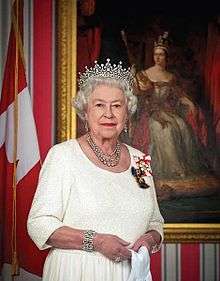 Her Majesty Queen Elizabeth II of Canada, wearing her Canadian insignia as Sovereign of the Order of Canada and the Order of Military Merit

Royal Assent is required to enact laws and, as part of the Royal Prerogative, the royal sign-manual gives authority to letters patent and orders in council, though the authority for these acts stems from the Canadian populace and,[17][18] within the conventional stipulations of constitutional monarchy, the sovereign's direct participation in any of these areas of governance is limited.[19][20] The Royal Prerogative also includes summoning, proroguing, and dissolving parliament in order to call an election, and extends to foreign affairs: the negotiation and ratification of treaties, alliances, international agreements, and declarations of war;[21] the accreditation of Canadian, and receipt of foreign, diplomats; and the issuance of passports.[22]

The person who is monarch of Canada (currently Queen Elizabeth II) is also the monarch of 15 other countries in the Commonwealth of Nations, though, he or she reigns separately as King or Queen of Canada, an office that is "truly Canadian" and "totally independent from that of the Queen of the United Kingdom and the other Commonwealth realms".[23][24] On the advice of the Canadian Prime Minister, the sovereign appoints a federal viceregal representative—the Governor General of Canada (currently David Johnston)—who, since 1947, is permitted to exercise almost all of the monarch's Royal Prerogative, though there are some duties which must be specifically performed by, or bills that require assent by, the king or queen. 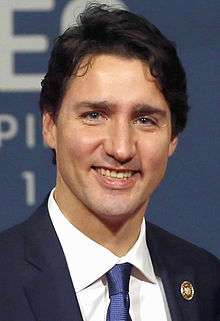 The government is defined by the constitution as the Queen acting on the advice of her privy council.[1][25][26][27] However, the Privy Council—consisting mostly of former members of parliament, chief justices of the supreme court, and other elder statesmen—rarely meets in full. As the stipulations of responsible government require that those who directly advise the monarch and governor general on how to exercise the Royal Prerogative be accountable to the elected House of Commons, the day-to-day operation of government is guided only by a sub-group of the Privy Council made up of individuals who hold seats in parliament.[27] This body of ministers of the Crown is the Cabinet.

One of the main duties of the Crown is to ensure that a democratic government is always in place,[28] which means appointing a prime minister (at present Justin Trudeau) to thereafter head the Cabinet.[29] Thus, the governor general must appoint as prime minister the person who holds the confidence of the House of Commons; in practice, this is typically the leader of the political party that holds more seats than any other party in that chamber, currently the Liberal Party. Should no party hold a majority in the commons, the leader of one party—either the one with the most seats or one supported by other parties—will be called by the governor general to form a minority government. Once sworn in by the viceroy, the prime minister holds office until he or she resigns or is removed by the governor general, after either a motion of non-confidence or his party's defeat in a general election.

The monarch and governor general typically follow the near-binding advice of their ministers. It is important to note, however, that the Royal Prerogative belongs to the Crown and not to any of the ministers,[16][30] who rule "in trust" for the monarch and,[31] upon losing the confidence of the commons, must relinquish the Crown's power back to it,[32] whereupon a new government, which can hold the lower chamber's confidence, is installed by the governor general. The royal and viceroyal figures may unilaterally use these powers in exceptional constitutional crisis situations.[n 1] Politicians can sometimes try to use to their favour the complexity of the relationship between the monarch, viceroy, ministers, and parliament, and the public's general unfamiliarity with it.[n 2] 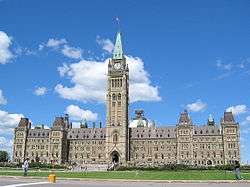 The Centre Block of the Canadian parliament buildings on Parliament Hill

The Parliament of Canada, the bicameral national legislature located on Parliament Hill in the national capital of Ottawa, consists of the Queen (represented by the governor general), the appointed Senate (upper house), and the elected House of Commons (lower house).[33] The governor general summons and appoints each of the 105 senators on the advice of the prime minister,[34] while the 338 members of the House of Commons (Members of Parliament) are directly elected by eligible voters in the Canadian populace, with each member representing a single electoral district for a period mandated by law of not more than four years;[35] the constitution mandates a maximum of five years. Per democratic tradition, the House of Commons is the dominant branch of parliament; the Senate and Crown rarely oppose its will. The Senate, thus, reviews legislation from a less partisan standpoint.

The Constitution Act, 1867, outlines that the governor general is responsible for summoning parliament in the Queen's name. A parliamentary session lasts until a prorogation, after which, without ceremony, both chambers of the legislature cease all legislative business until the governor general issues another royal proclamation calling for a new session to begin. After a number of such sessions, each parliament comes to an end via dissolution. As a general election typically follows, the timing of a dissolution is usually politically motivated, with the prime minister selecting a moment most advantageous to his or her political party. The end of a parliament may also be necessary, however, if the majority of Members of Parliament revoke their confidence in the Prime Minister's ability to govern, or the legally mandated (as per the Canada Elections Act) four-year maximum is reached; no parliament has been allowed to expire in such a fashion.

The sovereign is responsible for rendering justice for all her subjects, and is thus traditionally deemed the fount of justice.[36] However, she does not personally rule in judicial cases; instead the judicial functions of the Royal Prerogative are performed in trust and in the Queen's name by officers of Her Majesty's courts.

The Supreme Court of Canada—the country's court of last resort—has nine justices appointed by the governor general on recommendation by the prime minister and led by the Chief Justice of Canada, and hears appeals from decisions rendered by the various appellate courts from the provinces and territories. Below this is the Federal Court, which hears cases arising under certain areas of federal law.[37] It works in conjunction with the Federal Court of Appeal and Tax Court of Canada.[38]

The powers of the parliaments in Canada are limited by the constitution, which divides legislative abilities between the federal and provincial governments; in general, the legislatures of the provinces may only pass laws relating to topics explicitly reserved for them by the constitution, such as education, provincial officers, municipal government, charitable institutions, and "matters of a merely local or private nature,"[39] while any matter not under the exclusive authority of the provincial legislatures is within the scope of the federal parliament's power. Thus, the parliament at Ottawa alone can pass laws relating to, amongst other things, the postal service, the census, the military, criminal law, navigation and shipping, fishing, currency, banking, weights and measures, bankruptcy, copyrights, patents, First Nations, and naturalization.[40] In some cases, however, the jurisdictions of the federal and provincial parliaments may be more vague. For instance, the federal parliament regulates marriage and divorce in general, but the solemnization of marriage is regulated only by the provincial legislatures. Other examples include the powers of both the federal and provincial parliaments to impose taxes, borrow money, punish crimes, and regulate agriculture.

Polls have suggested Canadians generally do not have a solid understanding of civics,[41] which has been theorised to be a result of less attention being given to the subject in provincial education curricula, beginning in the 1960s.[42] By 2008, a poll showed only 24% of respondents could name the Queen as head of state;[43] Senator Lowell Murray wrote five years earlier: "The Crown has become irrelevant to most Canadian's understanding of our system of Government."[44] John Robson opined in 2015: "intellectually, voters and commentators succumb to the mistaken notion that we elect 'governments' of prime ministers and cabinets with untrammelled authority, that indeed ideal 'democracy' consists precisely in this kind of plebiscitary autocracy."[45] Politicians have, on occasion, taken advantage of such misunderstandings, as when then members of the Cabinet, headed by Stephen Harper, suggested in 2008 a change of government by way of a non-confidence vote by a coalition of opposition parties was undemocratic and tantamount to a coup d'état[46] and Harper in 2015 stated Canadians voters elect governments.[47]