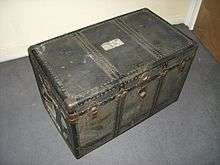 Baggage or luggage consists of bags, cases, and containers which hold a traveller's articles during transit.[1]

The modern traveller can be expected to have packages containing clothing, toiletries, small possessions, trip necessities, and on the return-trip, souvenirs. For some people, luggage and the style thereof is representative of the owner's wealth.

Baggage (not luggage),[2] or baggage train, can also refer to the train of people and goods, both military and of a personal nature, which commonly followed pre-modern armies on campaign.

Luggage has changed over time. Historically the most common types of luggage were chests or trunks made of wood or other heavy materials. These would be shipped by professional movers. Since the Second World War smaller and more lightweight suitcases and bags that can be carried by an individual have become the main form of luggage.

According to the Oxford English Dictionary, the word baggage comes from Old French bagage (from baguer "tie up") or from bagues ("bundles"). It may also be related to the word bag.[3]

Also according to the Oxford English Dictionary, the word luggage originally meant inconveniently heavy baggage and comes from the verb lug and the suffix -age.[4] 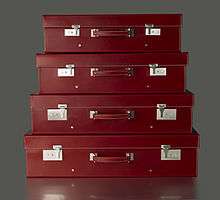 A set of custom made (bespoke) suitcases. 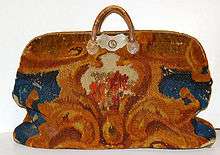 Rolling suitcases were invented in 1970, when Bernard D. Sadow applied for a patent that was granted in 1972 as United States patent 3,653,474 for "Rolling Luggage".[5] The patent application cited the increase in air travel, and "baggage handling [having] become perhaps the single biggest difficulty encountered by an air passenger", as background of the invention.[6] Sadow's four-wheeled suitcases, pulled using a loose strap, were later surpassed in popularity by rollaboards, suitcases that feature two wheels and are pulled in an upright position using a long handle, and were invented in 1987 by US pilot Robert Plath.[5]

Sadow attributes the late invention of luggage on wheels to a "macho thing" where "men would not accept suitcases with wheels".[5] Others attribute the late invention to "the abundance of luggage porters with carts in the 1960s, the ease of curbside drop-offs at much smaller airports and the heavy iron casters then available."[7]

Some vehicles have an area specifically for luggage to be held, called the automobile "trunk" in the United States. Items stored in the hold are known as hold luggage. A typical example would be a suitcase. If travelling by coach passengers will often be expected to place their own luggage in the hold, before boarding. Aeroplanes in contrast are loaded by professional baggage handlers. 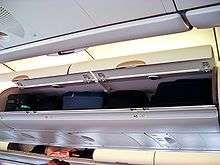 Passengers are allowed to carry a limited number of smaller bags with them in the vehicle, these are known as hand luggage (more commonly referred to as carry-on in North America), and contain valuables and items needed during the journey. There is normally storage space provided for hand luggage, either under seating, or in overhead lockers. Trains often have luggage racks at the ends of the carriage near the doors, or above the seats if there are compartments. There are differing views between North America and Europe in relation to the rules concerning the amount of baggage carried on to aircraft. In North America there is considerable debate as to whether passengers carry too many bags on board and that their weight could be a risk to other passengers and flight safety. US airlines are beginning to introduce weight and size restrictions for carry-on baggage. Whereas in Europe, many airlines, especially low-cost airlines, impose what is commonly known as "the one-bag rule". This is a restriction imposed to stop excessive weight on board and airlines claim that this policy allows them to speed the boarding of the aircraft. Airports in Europe have mounted a campaign with the European Commission in an attempt to overturn these hand luggage regulations. They claim that it is affecting their duty-free and other airport retail sales and is reducing their revenues.

In airport terminals, a baggage claim or reclaim area is an area where arriving passengers claim checked-in baggage after disembarking from an airline flight. At most airports and many train stations, baggage is delivered to the passenger on a baggage carousel.

Left luggage, also luggage storage or bag storage, is a place where one can temporarily store one's luggage so as to not have to carry it. Left luggage is not synonymous with lost luggage. Often at an airport or train station there may be a staffed 'left luggage counter' or simply a coin-operated or automated locker system. With higher threats of terrorism all around the globe, this type of public storage is disappearing.

Luggage forwarding, also known as luggage shipping or luggage logistics, is a type of speciality shipping service that has been available for approximately 10 years and has grown in demand, particularly after the September 11, 2001 attacks. The purpose of luggage forwarding is to reduce the hassles of baggage handling commonly experienced by airline passengers at airports.

Baggage can also refer to the train of people and goods, both military and of a personal nature, which commonly followed pre-modern armies on campaign. The baggage was considered a strategic resource and guarded by a rear guard. Its loss was considered to weaken and demoralize an army, leading to rearguard attacks such as that at the Battle of Agincourt.