López was born at Manorá (Asunción) on November 4, 1792, and was educated in the ecclesiastical seminary of that city. He attracted the hostility of the dictator José Gaspar Rodríguez de Francia - his reputed uncle.[1] This forced him into hiding for several years. He acquired, however, such a great knowledge of law and governmental affairs that following Francia's death in 1840, he eventually became Paraguay's leader. 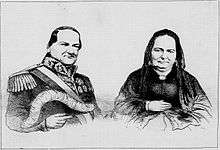 He served briefly as secretary of the military junta that ruled the country in the interval after Francia's death from 1840–1841. In 1841 he was chosen as the country's first consul—a post equivalent to that of president—ruling alongside Mariano Roque Alonso. In 1844 he exiled Roque and assumed dictatorial powers. On March 13, 1844, Congress approved the first Paraguayan Constitution - probably the work of López himself. A few months later, Congress changed his post from consul to president, and elected him to the new post for a 10-year term. The constitution not only legally sanctioned López' dictatorial powers, but included no guarantees of civil rights; the word "liberty" did not appear in the text. He was reelected for a three-year term in 1854, and then reelected in successive elections for ten and three years, and in 1857 again for ten years, with power to nominate his own successor.

His government was in general directed with wise energy towards developing the material resources and strengthening the military power of the country. He contracted numerous foreign technicians, mainly English, and built up the formidable Fortress of Humaitá.[2][3]

His approach to foreign affairs several times involved him in diplomatic disputes with the Empire of Brazil, the United States and the British Empire, which nearly resulted in war, but each time he extricated himself by skilful diplomacy or by astutely knowing when to back off. Despite the lack of any civil rights in Paraguay, he was somewhat more tolerant of opposition than Francia had been. He released all political prisoners soon after taking full power, and also took measures to abolish slavery[4] and torture.

His eldest son, Francisco Solano López (1827–1870), succeeded him as president after his death.

A barrio of Asuncion is named after him