Dianthus caryophyllus, carnation or clove pink, is a species of Dianthus. It is probably native to the Mediterranean region but its exact range is unknown due to extensive cultivation for the last 2,000 years.[1][2][3][4]

It is a herbaceous perennial plant growing to 80 cm tall. The leaves are glaucous greyish green to blue-green, slender, up to 15 cm long. The flowers are produced singly or up to five together in a cyme; they are 3–5 cm diameter, and sweetly scented; the original natural flower colour is bright pinkish-purple, but cultivars of other colours, including red, white, yellow and green, have been developed.[4][5]

Some fragrance-less carnation cultivars are often used as boutonnieres for men.

Colombia is the largest carnation producer in the world. 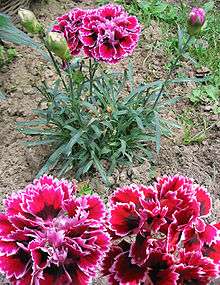 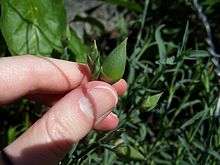 For the most part, carnations express love, fascination, and distinction, though there are many variations dependent on colour.

The formal name for carnation, dianthus, comes from Greek for "heavenly flower",[8] or the flower of Jove.[9] 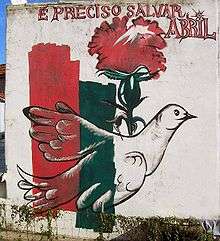 Carnations are often worn on special occasions, especially Mother's Day and weddings. In 1907, Anna Jarvis chose a carnation as the emblem of Mother's Day because it was her mother's favourite flower.[10] This tradition is now observed in the United States and Canada on the second Sunday in May. Ann Jarvis chose the white carnation because she wanted to represent the purity of a mother's love.[11][12] This meaning has evolved over time, and now a red carnation may be worn if one's mother is alive, and a white one if she has died.[13]

Red carnations are worn on May Day as a symbol of socialism and the labour movement in some countries, such as Austria, Italy,[14] and successor countries of the former Yugoslavia. The red carnation is also the symbol of the Portuguese Carnation Revolution.

Green carnations are for St. Patrick's Day and were famously worn by the Irish writer Oscar Wilde. The green carnation thence became a symbol of homosexuality in the early 20th century, especially through the book The Green Carnation and Noël Coward's song, "We All Wear a Green Carnation" in his operetta, Bitter Sweet.

In Poland, in times of People's Republic of Poland, carnations were traditionally given to women on the widely celebrated Women's Day, together with commodities that were difficult to obtain due to the economic hardships faced by the country's communist system, such as tights, towels, soap and coffee.

At the University of Oxford, carnations are traditionally worn to all examinations; white for the first exam, pink for exams in between, and red for the last exam. One story explaining this tradition relates that initially a white carnation was kept in a red inkpot between exams, so by the last exam it was fully red; the story is thought to originate in the late 1990s.[15] 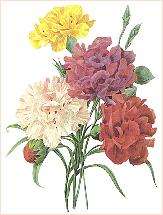 Symbols of territorial entities and organizations

Carnation is the national flower of Spain, Monaco, and Slovenia, and the provincial flower of the autonomous community of the Balearic Islands. The state flower of Ohio is a scarlet carnation, which was introduced to the state by Levi L. Lamborn. The choice was made to honor William McKinley, Ohio Governor and U.S. President, who was assassinated in 1901, and regularly wore a scarlet carnation on his lapel.[17] 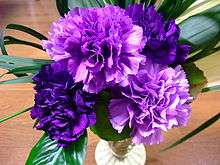 Carnations do not naturally produce the pigment delphinidin, thus a blue carnation cannot occur by natural selection or be created by traditional plant breeding. It shares this characteristic with other widely sold flowers like roses, lilies, tulips, chrysanthemums and gerberas. 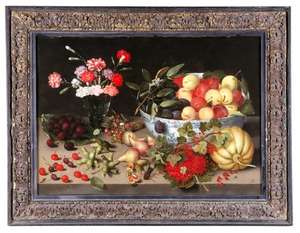 Carnations were mentioned in Greek literature 2,000 years ago. "Dianthus" was coined by Greek botanist Theophrastus, and is derived from the Greek words for divine ("dios") and flower ("anthos").[20] Some scholars believe that the name "carnation" comes from "coronation" or "corone" (flower garlands), as it was one of the flowers used in Greek ceremonial crowns. Others think the name stems from the Latin "caro" (genitive "carnis") (flesh), which refers to the original colour of the flower, or incarnatio (incarnation), which refers to the incarnation of God made flesh. The legend that explains the name is that Diana the Goddess came upon the shepherd boy and took a liking to him. But the boy, for some reason, turned her down. Diana ripped out his eyes and threw them to the ground where they sprouted into the Dianthus flower.