In March 2014 Cessna became a brand of Textron Aviation.[3]

Clyde Cessna, a farmer in Rago, Kansas, built his own aircraft and flew it in June 1911, the first person to do so between the Mississippi River and the Rocky Mountains. Cessna started his wood-and-fabric aircraft ventures in Enid, Oklahoma, testing many of his early planes on the salt flats. When bankers in Enid refused to lend him more money to build his planes, he moved to Wichita.[4] 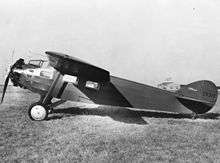 Cessna Aircraft was formed when Clyde Cessna and Victor Roos became partners in the Cessna-Roos Aircraft Company in 1927. Roos resigned just one month into the partnership selling back his interest to Cessna.[5] In the same year, the Kansas Secretary of State approved dropping Roos's name from the company name.[6]

In 1932 Cessna Aircraft Company closed its doors due to the Great Depression.

However the Cessna CR-3 custom racer took its first flight in 1933. The plane won the 1933 American Air Race in Chicago and later set a new world speed record for engines smaller than 500 cubic inches by averaging 237 mph (381 km/h).[6]

Cessna's nephews, Dwane Wallace and his brother Dwight, bought the company from Cessna in 1934. They reopened it and began the process of building it into what would become a global success.[7] 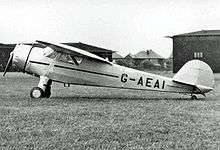 Cessna returned to commercial production in 1946, after the revocation of wartime production restrictions (L-48) with the release of the Model 120 and Model 140. The approach was to introduce a new line of all-metal aircraft that used production tools, dies and jigs rather than the hand-built process tube-and-fabric construction used before the war.[8][9]

The Model 140 was named by the US Flight Instructors Association as the "Outstanding Plane of the Year", in 1948.[8] 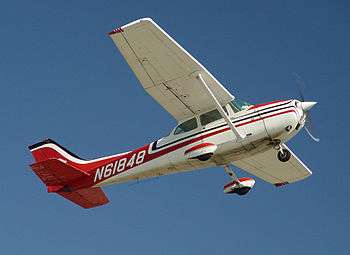 Cessna introduced the Cessna 172, in 1956. It became the most produced airplane in history.[10]

In 1985 Cessna ceased to be an independent company. It was purchased by General Dynamics Corporation and became a wholly owned subsidiary. Production of the Cessna Caravan began.[13] General Dynamics in turn, sold Cessna to Textron Inc, in 1992.[14]

On 27 November 2007, Cessna announced the new Cessna 162 would be made in the People's Republic of China by Shenyang Aircraft Corporation, which is a subsidiary of the China Aviation Industry Corporation I (AVIC I), a Chinese government-owned consortium of aircraft manufacturers.[17] Cessna reported that by manufacturing in China, it saved USD$71,000 per aircraft, or about 40% of the cost. A second reason Cessna gave for moving production was that it had no more plant capacity in the USA at the time.[18]

Cessna received much negative feedback for this decision from Cessna 162 customers and potential customers. Complaints centered on the recent problems with Chinese production of other consumer products, China's human rights record, exporting of jobs, and China's less than friendly political relationship with the USA.[19] The backlash surprised Cessna and resulted in a company public relations campaign to try to explain the decision from a business perspective and assure customers that quality of the aircraft will not be compromised.[20] The reaction to the explanations and assurances has been overwhelmingly negative, although a small number of customers have applauded the production in China.[19]

In early 2009, the company attracted further criticism for continuing plans to build the 162 in China while laying off large numbers of workers in the USA.[21]

The company's business suffered notably during the Late-2000s recession, laying off more than half its workforce between January 2009 and September 2010.

On 4 November 2008 Cessna's parent company, Textron, indicated that Citation production would be reduced from the original 2009 target of 535 "due to continued softening in the global economic environment" and that this would result in an undetermined number of lay-offs at Cessna.[22]

On 8 November 2008, at the AOPA Expo, CEO Jack Pelton indicated that Cessna sales of aircraft to individual buyers had fallen but piston and turboprop sales to business had not. "While the economic slowdown has created a difficult business environment, we are encouraged by brisk activity from new and existing propeller fleet operators placing almost 200 orders for 2009 production aircraft," Pelton stated.[23][24]

Beginning in January 2009, a total of 665 jobs were cut at Cessna's Wichita and Bend, Oregon plants. The Cessna factory at Independence, Kansas, which builds the Cessna piston-engined aircraft and the Cessna Mustang, did not see any layoffs, but one third of the workforce at the former Columbia Aircraft facility in Bend was laid off. This included 165 of the 460 employees who built the Cessna 350 and 400. The remaining 500 jobs were eliminated at the main Cessna Wichita plant.[25]

In January 2009 the company laid off an additional 2,000 employees, bringing the total to 4,600. The job cuts included 120 at the Bend, Oregon facility reducing the plant that built the Cessna 350 and 400 to fewer than half the number of workers that it had when Cessna bought it. Other cuts included 200 at the Independence, Kansas plant that builds the single-engined Cessnas and the Mustang, reducing that facility to 1,300 workers.[21]

On 29 April 2009 the company suspended the Citation Columbus program and closing the Bend, Oregon facility. The Columbus program was finally cancelled in early July 2009. The company said "Upon additional analysis of the business jet market related to this product offering, we decided to formally cancel further development of the Citation Columbus". With the 350 and 400 production moving to Kansas, the company indicated that it would lay off 1,600 more workers, including the remaining 150 employees at the Bend plant and up to 700 workers from the Columbus program.[26][27]

In early June 2009 Cessna laid off an additional 700 salaried employees, bringing the total number of lay-offs to 7600, which was more than half the company's workers at the time.[28]

The company closed its three Columbus, Georgia manufacturing facilities between June 2010 and December 2011. The closures included the new 100,000-square-foot (9,300 m2) facility that was opened in August 2008 at a cost of US$25M, plus the McCauley Propeller Systems plant. These closures resulted in total job losses of 600 in Georgia. Some of the work was relocated to Cessna's Independence, Kansas or Mexican facilities.[29]

Cessna's parent company Textron posted a loss of US$8M in the first quarter of 2010, largely driven by continuing low sales at Cessna, which were down 44%. Cessna's workforce remained 50% laid-off and CEO Jack Pelton stated that he expected the recovery to be long and slow.[30]

In September 2010, a further 700 employees were laid off, bringing the total to 8,000 jobs lost. CEO Jack Pelton indicated this round of layoffs was due to a "stalled [and] lackluster economy" and noted that while the number of orders cancelled for jets has been decreasing new orders have not met expectations. Pelton added "our strategy is to defend and protect our current markets while investing in products and services to secure our future, but we can do this only if we succeed in restructuring our processes and reducing our costs."[31][32]

On 2 May 2011 CEO Jack Pelton retired. The new CEO, Scott A. Ernest, started on 31 May 2011.[33] Ernest joined Textron after 29 years at GE, where he had most recently served as vice president and general manager, global supply chain for GE Aviation. Ernest previously worked for Textron CEO Scott Donnelly when both worked at GE.[34]

In September 2011 the Federal Aviation Administration proposed a US$2.4M fine against the company for its failure to follow quality assurance requirements while producing fiberglass components at its plant in Chihuahua, Mexico. Excess humidity meant that the parts did not cure correctly and quality assurance did not detect the problems. The failure to follow procedures resulted in the delamination in flight of a 7 ft (2.1 m) section of one Cessna 400's wing skin from the spar while the aircraft was being flown by an FAA test pilot. The aircraft was landed safely. The FAA also discovered 82 other aircraft parts that had been incorrectly made and not detected by the company's quality assurance. The investigation resulted in an emergency airworthiness directive that affected 13 Cessna 400s.[35]

Since March 2012, Cessna has been pursuing building business jets in China as part of a joint venture with Aviation Industry Corporation of China (AVIC). The company stated that it intends to eventually build all aircraft models in China, saying "The agreements together pave the way for a range of business jets, utility single-engine turboprops and single-engine piston aircraft to be manufactured and certified in China."[36][37]

In late April 2012 the company recalled laid-off workers and started new hiring to fill 150 positions in Wichita as a result of anticipated increased demand for aircraft production.[38]

During the 1950s and 1960s Cessna's marketing department followed the lead of Detroit automakers and came up with many unique marketing terms in an effort to differentiate its product line from their competitions'.

Other manufacturers and the aviation press widely ridiculed and spoofed many of the marketing terms, but Cessna built and sold more aircraft than any other manufacturer during the boom years of the 1960s and 1970s. 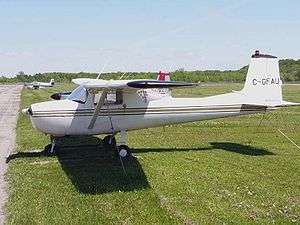 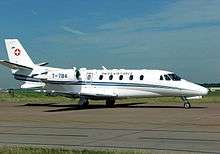 Currently Cessna has the following models in production:[41]