Chaghri and his brother Tughril were the sons of Mikail and the grandsons of Seljuq. The Great Seljuq Empire was named after the latter, who was a Turkic clan leader either in Khazar[4] or Oghuz states. In the early years of the 11th century, they left their former home and moved near the city of Jend (now a village) by the Syr Darya river, where they accepted the suzerainty of the Karakhanids in Transoxania (roughly modern Uzbekistan and southern Kazakhstan). After the defeat of the Karakhanids by Ghaznavids, they were able to gain independence.

Very little is known of Chaghri and Tughril's lives until 1025. Both were raised by their grandfather Seljuq until they were fifteen and fought with Ali Tigin Bughra Khan, a minor Kara Khanid noble, against Mahmud of Ghazni.[5] The earliest records of Chaghri concern his expeditions in Eastern Anatolia. Although a Ghaznavid governor chased him from his home in Jend to Anatolia, he was able to raid the Byzantine forts in Eastern Anatolia.[6] However, according to Claude Cahen this was highly improbable and of legend.[7] From 1035 to 1037 Chaghri and Tughril fought against Mas'ud I of Ghazni. Chaghri captured Merv (an important historical city now in Turkmenistan).[8] Between 1038 and 1040 Chaghri fought against the Ghaznavids, usually with hit and run maneuvers and culminating in a major clash at the Battle of Dandanaqan. Tughril was rather hesitant and preferred continuing the hit-and-run attacks, but Chaghri commanded the Seljuk army and preferred direct confrontation.[9] At Dandanaqan, the Seljuks defeated the numerically superior Gaznavid army. A kurultai was held after the battle, by which empire was divided between the two brothers. While Tughril reigned in the west (comprising modern western Iran, Azerbaijan and Iraq), Chaghri reigned in eastern Iran, Turkmenistan, and Afghanistan, a region collectively referred to as Greater Khorasan. Chaghri later also captured Balkh (in modern North Afghanistan). In 1048, he conquered Kerman in South Iran and, in 1056, the Sistan region (south east Iran).[10] After the Seljuqs had gained more influence over the Abbasid caliphate, Chaghri married his daughter, Arslan Khatun Khadija, to the caliph Al-Qa'im in 1056.[11][12]

Chaghri died in Sarakhs, in North-eastern Iran. The historical sources do not agree on the exact date of his death: years 1059, 1060, 1061 and 1062 were proposed. But it is purported that numismatics can be used to determine the exact death date. Coins were minted in the name of Chaghri up to 1059 and in the name of his son Kavurt after 1060, so Chaghri's death can be ascribed more probably to 1059.[13] Upon death, he was succeeded as Governor of Khorasan by his son, Alp Arslan. 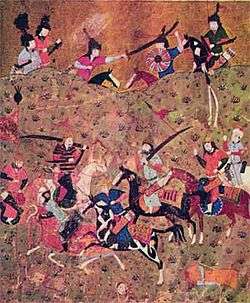 Unlike later Ottoman practice, in earlier Turkic tradition, brothers usually participated in government affairs.(Bumin - İstemi in the 6th century, Bilge Khan – Kultegin in the 8th century are notable examples.) Tughril and Chaghri as well as some other members of the family participated in the foundation of the empire. Although Tughril gained the title "sultan", it was Chaghri’s sons who continued it afterwards.