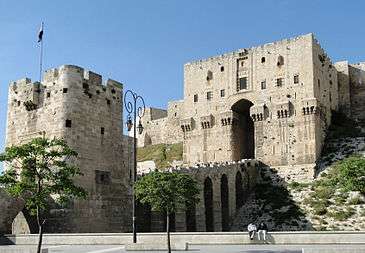 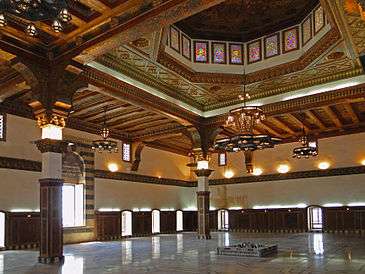 The rulers of Aleppo ruled as kings, Emirs and Sultans of the city and its region since the later half of the 3rd millennium BC,[1] starting with the kings of Armi,[2] followed by the Amorite dynasty of Yamhad,[3] and ending with the Ayyubid dynasty which was ousted by the Mongol conquest in 1260.

The Emirate of Halab was established in 945 by the Hamdanid dynasty and lasted until 1086, when it was elevated to the rank of Sultanate under the Seljuq dynasty, the sultanate was sometimes ruled along with Damascus by the same sultan.

The Artuqids rulers used the Titles of King (Malik) and Emir, so did the Zengid rulers in addition to the title Atabeg, while the Ayyubid monarchs used the titles of Sultan and Malik

The dates for Yamhad and the Hittite Dynasties are proximate and calculated by the Middle chronology.

Yamhad was the name of the Amorite kingdom centered at Ḥalab (modern day Aleppo),[4] its dynasty ruled for more than two centuries, Aleppo became a major power and dominated Northern Syria with the monarch holding the title of Great King.[5][6]

Aleppo was conquered by Mursili I King of the Hittites, who captured Hammurabi III, the dynasty regained Halab after the assassination of Mursili but the "Yamhad" name fell out of use.[7]

Parshatatar of Mitanni conquered Aleppo, and the city became part of that kingdom until conquered by Suppiluliuma I of the Hittites in the 14th century BC. Suppiluliuma installed his son Telipinus as king of Aleppo. Not all the kings of this dynasty are known. The Hittite dynasty remained in power until the Late Bronze Age collapse.[8][9][10]

The Hamdanids were an Arab dynasty, established in 945 by Ali ibn Abdallah nicknamed Sayf al-Dawla.[26] They ruled most of Syria with Aleppo as their capital,[27] under the titular authority of the Abbasid Caliph.[28]

Qar'awyh the chamberlain of Sayf al-Dawla ousted Sa'd al-Dawla and assumed control over the city, Sa'd al-Dawla was able to regain Aleppo in 977.[28][29]

Lu'lu' was a slave and then chamberlain of Sa'd al-Dawla, he married his daughter to Sa'id al-Dawla, and after the latter death he assumed direct power over Aleppo, at first as ostensible guardians over Sa'id al-Dawla's sons Abu'l-Hasan Ali and Abu'l-Ma'ali Sharif, until in 1004 when he had them exiled to Egypt.[30]

a rebellion broke in the city, Mubarak al-Dawla Fath the custodian of the Citadel opened the doors for the rebels causing Mansur to flee, then Fath accepted the authority of the Fatimid Caliph and after a brief rule ceded Aleppo to the caliph in return for the treasury and the rule of Tyre.[31]

Al-Hakim appointed Fatik Aziz al-Dawla as the first Fatimid governor of Aleppo but in 1020 Fatik declared his independence, and ruled for two years before being assassinated by a Fatimid agent.[31]

The Mirdasids conquered Aleppo, establishing their independence in it, they kept their autonomy through political maneuvers allying themselves with the Byzantines at times or the Fatimid at others,[31] Ibn al-Adim an Aleppan historian who lived in the 13th century recorded the history of the Mirdasid Dynasty in his book The cream of the history of Aleppo.

After the death of Salih, his sons Nasr and Thimal ruled together, in 1030 Nasr deposed Thimal and ruled solely until killed by Anushtakin al-Dizbari, the Fatimid Governor of Damascus, then Thimal regained Aleppo briefly from 23 May to 13 June 1038 when the Fatimid army took the city bringing it back to the Fatimid direct rule.[31]

In December 1041 Anushtakin al-Dizbari fell out of favor with Cairo and declared his independence in Aleppo, but died of illness in January 1042.[31]

Thimal regained Aleppo and accepted the authority of the Fatimid Caliph.[31]

In 1057, fearing family intrigues, Thimal handed over Aleppo to the Fatimids in return for Acre, Byblos and Beirut, thus returning Aleppo into the Fatimid direct control.[31]

In July 1060 Thimal nephew, Mahmud the son of Shibl al-Dawla Nasr regained Aleppo only to lose it on 7 August 1060 to the Fatimids.[31]

About three weeks later on 30 August 1060 Asad al-Dawla 'Atiyya son of Salih the founder of the dynasty occupied Aleppo for a day and a half then fled as Mu'izz al-Dawla Mahmud advanced on the city after defeating the Fatimid army.[31]

The pressure of Tutush I led the people of Aleppo along with the Mirdasid Emir to offer the city keys to Sharaf al-Dawla Muslim the ruler of Mosul, the Mirdasid family members were compensated by various towns in Syria.[32]

Sharaf al-Dawla was killed in June 1085 and was succeeded by his brother Ibrahim ibn Quraysh in Mosul, while Halab was Managed by the Sharif Hassan ibn Hibat Allah Al-Hutayti.

After the death of Malik-Shah his governor the Zengid Qasim Ud Dawla Aq Sunqur enjoyed much autonomy, he Pledged allegiance to Malik-Shah son Mahmud I of Great Seljuq (the II of Aleppo) then swore allegiance to Tutush only to switch back to Mahmud II brother Barkiyaruq, in 1094 Tutush defeated and beheaded Aq Sunqur thus assuming full control over Aleppo.[31]

Sultan Shah was only six when he came to the throne, the threats of the Crusader Count Joscelin led Sultan Shah Guardian Ibn al-Khashshab to offer the city to Ilghazi of Mardin who came to Aleppo thus starting the Artuqid dynasty in Aleppo.[31]

Timurtash was occupied with taking over the cities of his recently deceased brother Suleiman I (who usurped Aleppo briefly in 1120), the crusaders attacked Aleppo but Timurtash refused to come back, this led the people of Aleppo to seek the help of Aq Sunqur al-Bursuqi the Seljuq Atabeg of Mosul, Aq Sunqur broke the crusader siege adding Aleppo to the domains of his Lord the Seljuq Sultan Mahmud II.[31]

In 1127 The city rebelled against the Seljuq governor Khatlagh Abah and restored Suleiman II.

Imad ad-Din Zengi the new Atabeg of Musol sent his army to end the troubles, he ruled in the name of Seljuq Sultan Mahmud II whose death led to civil war, Zengi didn't declare his independence and stood by Mas'ud the Seljuq Sultan of Iraq ruling in his name, however the sultan decided to eliminate Zengi and called upon him to show in his presence, Zengi was warned and declined to show thus becoming virtually independent.[31]

Zengi reconciled with the sultan and recognized his authority, but in practice he was independent in all but name.[31]

Nur al-Din Mahmud the son of Zengi inherited Aleppo, he took the title of King (Malik) and used the title of Emir,[33] formally the Zengid were subordinate to the Seljuq Sultans of Iraq (Hamedan), firstly Mas'ud then Malik-Shah III followed by Muhammad II, Nur al-Din kept using the Atabeg Title although he was completely independent as the Seljuq empire disintegrated after 1156,[34] and the sultans had to fight in Iraq to keep whats left of their authority, Muhammad II was the last Sultan to hold any real authority, he attacked Baghdad aided by Nur al-Din brother Mawdud, Muhammad II death in 1159 and the fact that his successor Suleiman Shah was a captive of Mawdud ended any real authority of the Seljuq Sultans,[35] Nur al-Din Held the Khutbah in the name of the Abbasid Caliph,[36] an enemy of the Seljuqs thus cutting any links with them.

The death of Nur al-Din caused chaos as Al-Salih his son and successor was only eleven, the Zengid governor's fought for power, each one of them trying to be the Atabeg of Al-Salih, one of them Gumushtigin became the guardian of the young king and tried to eliminate the others causing the governor of Damascus to ask Saladin the Zengid governor of Egypt for help. Saladin, formally a subordinate to Al-Salih but practically independent, marched on Syria entering Damascus in November 1174, he sieged Aleppo causing Al-Salih cousin Ghazi II the Emir of Mosul to send his army which Saladin defeated at the battle of Tell al-Sultan, Saladin was proclaimed King of Egypt and Syria, the Caliph al-Mustadi conferred the Title of Sultan upon him.[37]

Saladin met Al-Salih and concluded a peace with the 13 years old King in the middle of 1176 leaving him to rule Aleppo independently for life while he (Saladin) ruled the rest of Syria.[31]

On 24 January 1260 the Mongol Khan Hulagu Khan entered Aleppo after a month of Siege thus ending the Ayyubid Dynasty.

The Mamluk Sultan Qutuz defeated the Mongols at Ain Jalut on 3 September 1260,[38] the whole of Syria became part of the Mamluk Sultanate, Aleppo was the capital of its own province ruled by a Na'ib (Naib), some of these governors revolted and declared their independence in Aleppo like Shams al-Din Aqosh al-Borli who installed al-Hakim I as Abbasid Caliph in order to legitimize his reign while the Sultan Baibars I installed al-Mustansir II,[39] other governors revolted with the aim of ruling the whole sultanate such as Yalbogha al-Nasiri who had Sultan Barquq dethroned in 1389.[40]

Aqosh eventually reconciled with the sultan, in 1404 Sayf al-Din Jakam revolted and declared himself Sultan.[41]

Jakam Reoccupied the City and was pardoned and reappointed by the sultan, in May 1406 he was replaced by another Na'ib leading him to revolt again.