Not to be confused with Chengdu.
For other uses, see Chengde County.

Chengde (Chinese: 承德), previously known as Jehol or Rehe, is a prefecture-level city in Hebei province, situated northeast of Beijing. It is best known as the site of the Mountain Resort, a vast imperial garden and palace formerly used by the Qing emperors as summer residence.[1] The urban center had a population of approximately 450,000 as of 2009. 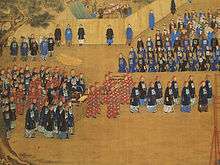 In 1703, Chengde was chosen by the Kangxi Emperor as the location for his summer residence. Constructed throughout the eighteenth century, the Mountain Resort (避暑山庄; literally "avoiding the heat mountain villa") was used by both the Yongzheng and Qianlong emperors. The site is currently an UNESCO World Heritage Site. Since the seat of government followed the emperor, Chengde was a political center of the Chinese empire during these times.

The city of Jehol reached its height under the Qianlong Emperor 1735-1796 (died 1799). The great Putuo Zongcheng Temple, loosely based on the Potala in Lhasa, was completed after just four years of work in 1771. It was heavily decorated with gold and the emperor worshipped in the Golden Pavilion. In the temple itself was a bronze-gilt statue of Tsongkhapa, the Reformer of the Gelugpa sect.

Under the Republic of China, Chengde was the capital of Rehe province. From 1933 to 1945 the city was under Japanese control as a part of the Manchurian puppet state known as Manchukuo. After World War II the Kuomintang regained jurisdiction. In 1948, the People's Liberation Army took control of Chengde. It would remain a part of Rehe until 1955, when the province was abolished, and the city was incorporated into Hebei.

The city is home to large populations of ethnic minorities, Mongol and Manchu in particular. The name for Chengde in Mongolian is ᠬᠠᠯᠠᠭᠤᠨ ᠭᠣᠣᠯ (Халуун гол) and in Manchu is Erdemu be aliha.

Chengde is located in the northeastern portion of Hebei, with latitude 40° 12'－42° 37' N, and longitude 115° 54'－119° 15' E, and contains the northernmost point in the province. It borders Inner Mongolia, Liaoning, Beijing, and Tianjin. Neighbouring prefecture-level provincial cities are Qinhuangdao and Tangshan on the Bohai Gulf, and land-locked Zhangjiakou. Due to its Liaoning border, it is often considered a part of both the North and Northeast China regions. From north to south the prefecture stretches 269 kilometres (167 mi), and from west to east 280 kilometres (174 mi), for a total area of 39,702.4 square kilometres (15,329.2 sq mi), thus occupying 21.2% of the total provincial area. It is by area the largest prefecture in the province, though as most of its terrain is mountainous, its population density is low.

Chengde has a four-season, monsoon-influenced humid continental climate (Köppen Dwa), with widely varying conditions through the prefecture due to its size: winters are moderately long, cold and windy, but dry, and summers are hot and humid. Near the city, however, temperatures are much cooler than they are in Beijing, due to the high altitude of at least 1000 metres: the monthly 24-hour average temperature ranges from −9.1 °C (15.6 °F) in January to 24.5 °C (76.1 °F) in July, and the annual mean is 9.11 °C (48.4 °F). Spring warming is rapid, but dust storms can blow in from the Mongolian steppe; autumn cooling is similarly quick. Precipitation averages at 512 millimetres (20.2 in) for the year, with more than two-thirds of it falling during the three summer months. With monthly percent possible sunshine ranging from 50% in July to 69% in October, the city receives 2,746 hours of sunshine annually.

The first ever bandy match in China was organised in Chengde in January 2015 and was played between the Russian and Swedish top clubs Baykal-Energiya and Sandviken.[3]

Chengde city was one of the initiators when the China Bandy Federation was founded in December 2014.[4]

With road and railroad links to Beijing, Chengde has developed into a distribution hub, and its economy is growing rapidly. The newly built Jingcheng Expressway connects Chengde directly to central Beijing, and more freeways are planned for the city. 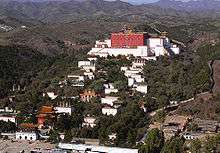 The Putuo Zongcheng Temple complex, completed in 1771 during the reign of the Qianlong Emperor.

The project of building Chengde Mountain Resort started in 1703 and finished in 1790. The whole mountain resort covers an area 5,640,000 square meters. It is the largest royal garden in China. The wall of the mountain resort is over 10,000 meters in length. In summers, emperors of Qing Dynasty came to the mountain resort to relax themselves and escape from the high temperature in Beijing.

The elaborate Mountain Resort features large parks with lakes, pagodas, and palaces ringed by a wall. Outside the wall are the Eight Outer Temples (外八庙), built in varying architectural styles drawn from throughout China. One of the best-known of these is the Putuo Zongcheng Temple, built to resemble the Potala Palace in Lhasa, Tibet. The resort and outlying temples were made a UNESCO World Heritage Site in 1994. The nearby Puning Temple, built in 1755, houses the world's tallest wooden statue of the Bodhisattva Avalokiteśvara.

Chengde's older name of Rehe (or Jehol) came from the name for the local river (热河; Pinyin: Rèhé) which translates as "hot river." The river was so named because it did not freeze in the winter. Most sections of the river are currently dry because of a new damming project.

Another popular attraction of the Chengde area is Sledgehammer Peak (磬锤峰), a large rock formation in the shape of an inverted sledgehammer. A variety of other mountains, valleys, and grasslands lie within the borders of the city.

Chengde has city partnerships with the following locations: