Chesley Knight Bonestell, Jr. (January 1, 1888 – June 11, 1986) was an American painter, designer and illustrator.[2] His paintings were a major influence on science fiction art and illustration, and he helped inspire the American space program. An early pioneering creator of astronomical art, along with the French astronomer-artist Lucien Rudaux, Bonestell was dubbed the "Father of Modern Space Art".

Bonestell was born in San Francisco, California. His first astronomical painting was done in 1905. After seeing Saturn through the 12-inch (300 mm) telescope at San Jose's Lick Observatory, he rushed home to paint what he had seen. The painting was destroyed in the fire that followed the 1906 earthquake. Between 1915 and 1918 he exhibited lithographs in the 4th and 7th annual exhibitions of the California Society of Etchers (now the California Society of Printmakers) in San Francisco.

Bonestell studied architecture at Columbia University in New York City. Dropping out in his third year, he worked as a renderer and designer for several of the leading architectural firms of the time. While with William van Alen, he and Warren Straton designed the art deco façade of the Chrysler Building as well as its distinctive eagles. During this same period, he designed the Plymouth Rock Memorial, the U.S. Supreme Court Building, the New York Central Building, Manhattan office and apartment buildings and several state capitols.[3]

Returning to the West Coast, he prepared illustrations of the chief engineer's plans for the Golden Gate Bridge for the benefit of funders. When the Great Depression dried up architectural work in the United States, Bonestell went to England, where he rendered architectural subjects for the Illustrated London News. In the late 1930s he moved to Hollywood, where he worked (without screen credit) as a special effects artist, creating matte paintings for films, including The Hunchback of Notre Dame (1939), Citizen Kane (1941) and The Magnificent Ambersons (1942). 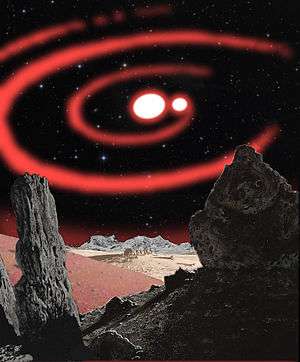 The Beta Lyrae binary in the sky of an airless planet, after the painting by Chesley Bonestell.

Bonestell then realized that he could combine what he had learned about camera angles, miniature modeling, and painting techniques with his lifelong interest in astronomy. The result was a series of paintings of Saturn as seen from several of its moons that was published in Life in 1944. Nothing like these had ever been seen before: they looked as though photographers had been sent into space. His painting of Saturn seen from the frosty moon Titan[4] is perhaps the most famous astronomical landscape ever. It was constructed with a combination of clay models, photographic tricks and various painting techniques. (Titan has a thick haze; such a view is probably not possible in reality.)

Bonestell followed up the sensation these paintings created by publishing more paintings in many leading national magazines. These and others were eventually collected in the best-selling book The Conquest of Space (1949), produced in collaboration with author Willy Ley. Bonestell's last work in Hollywood was contributing special effects art and technical advice to the seminal science fiction films produced by George Pal, including Destination Moon, When Worlds Collide, The War of the Worlds and Conquest of Space, as well as Cat-Women of the Moon. Beginning with the October 1947 issue of Astounding Science Fiction, Bonestell painted more than 60 cover illustrations for science fiction magazines, primarily The Magazine of Fantasy & Science Fiction, in the 1950s through 1970s. He also illustrated many book covers.[1]

When Wernher von Braun organized a space flight symposium for Collier's, he invited Bonestell to illustrate his concepts for the future of spaceflight. For the first time, spaceflight was shown to be a matter of the near future. Von Braun and Bonestell showed that it could be accomplished with the technology then existing in the mid-1950s, and that the question was that of money and will. Coming as they did at the beginning of the Cold War and just before the sobering shock of the launch of Sputnik, the 1952–54 Collier's series, "Man Will Conquer Space Soon!", was instrumental in kick-starting America's space program.

In 1986, Bonestell died in Carmel, California, with an unfinished painting on his easel.[5] 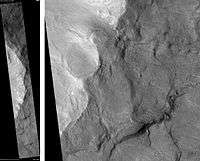 During his lifetime, Bonestell was honored internationally for the contributions he made to the birth of modern astronautics, from a bronze medal awarded by the British Interplanetary Society to a place in the International Space Hall of Fame[6] to an asteroid named for him. The Conquest of Space won the 1951 International Fantasy Award for nonfiction, one of the first two fantasy or science fiction awards anywhere, at the British SF Convention.[7] The Science Fiction Hall of Fame inducted Bonestell in 2005, the first year it considered non-literary contributors.[8][lower-alpha 1]

His paintings are prized by collectors and institutions such as the National Air and Space Museum and the National Collection of Fine Arts. One of his classic paintings, an ethereally beautiful image of Saturn seen from its giant moon Titan, has been called "the painting that launched a thousand careers." Wernher von Braun wrote that he had "learned to respect, nay fear, this wonderful artist's obsession with perfection. My file cabinet is filled with sketches of rocket ships I had prepared to help in his artwork—only to have them returned to me with…blistering criticism."

A crater on Mars and the asteroid 3129 Bonestell are named after him.

In 2016 the first ever album of Sun Ra vocal tracks was released, The Space Age Is Here To Stay, featuring sleeve art authorized by the Bonestell estate.[10]

Films with artwork by Bonestell

Bonestell appeared in the documentary The Fantasy Film Worlds of George Pal (1985) (Produced and directed by Arnold Leibovit).