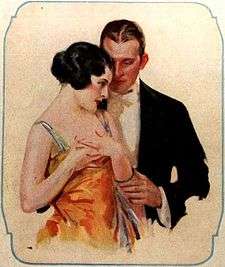 Biggs illustration used in a soap ad in 1922.

Biggs was born in Elliston, Virginia, in 1886. He studied in New York City at the New York School of Art. He was a student of Robert Henri, and some of his fellow students included Edward Hopper and Rockwell Kent.[2] He later taught at the Art Students League and the New York School of Art.[3] He lived in the suburban community of New Rochelle which was a well known artist colony and home to many of the top commercial illustrators of the day such as Frank and J. C. Leyendecker and Norman Rockwell.[4] Also in residence were Al Parker, Mead Schaeffer and Dean Cornwell, who, along with Tom Lovell, N. C. Wyeth and Harold von Schmidt would become leaders in the field.[5]

Biggs became known in the 1920s and 1930s for his illustrations for popular magazines such as the Ladies' Home Journal.[6]

In 1944, Biggs was elected into the National Academy of Design as an Associate member, and became a full member in 1947. In 1963 he was inducted into the Society of Illustrators Hall of Fame.[6]

Walter Biggs died February 11, 1968. An historical marker was erected at the intersection of Roanoke Boulevard and College Street, in Salem, Virginia, across from Biggs’ family home.[7]