Edward St. John Gorey was born in Chicago. His parents, Helen Dunham (née Garvey) and Edward Lee Gorey,[2] divorced in 1936 when he was 11, then remarried in 1952 when he was 27. One of his stepmothers was Corinna Mura (1909–1965), a cabaret singer who had a small role in the classic film Casablanca as the woman playing the guitar while singing "La Marseillaise" at Rick's Café Américain. His father was briefly a journalist. Gorey's maternal great-grandmother, Helen St. John Garvey, was a popular nineteenth-century greeting card writer and artist, from whom he claimed to have inherited his talents.

Gorey attended a variety of local grade schools and then the Francis W. Parker School. He spent 1944 to 1946 in the Army at Dugway Proving Ground in Utah. He then attended Harvard University, beginning in 1946 and graduating in the class of 1950; he studied French and roomed with poet Frank O'Hara.[3]

In the early 1950s, Gorey, with a group of recent Harvard alumni including Alison Lurie (1947), John Ashbery (1949), Donald Hall (1951) and Frank O'Hara, amongst others, founded the Poets' Theatre in Cambridge, which was supported by Harvard faculty members John Ciardi and Thornton Wilder.[3][4][5]

He frequently stated that his formal art training was "negligible"; Gorey studied art for one semester at the School of the Art Institute of Chicago in 1943.

From 1953 to 1960, he lived in New York City and worked for the Art Department of Doubleday Anchor, illustrating book covers and in some cases, adding illustrations to the text. He illustrated works as diverse as Dracula by Bram Stoker, The War of the Worlds by H. G. Wells, and Old Possum's Book of Practical Cats by T. S. Eliot. In later years he produced cover illustrations and interior artwork for many children's books by John Bellairs, as well as books begun by Bellairs and continued by Brad Strickland after Bellairs' death.

His first independent work, The Unstrung Harp, was published in 1953. He also published under pen names that were anagrams of his first and last names, such as Ogdred Weary, Dogear Wryde, Ms. Regera Dowdy, and dozens more. His books also feature the names Eduard Blutig ("Edward Gory"), a German language pun on his own name, and O. Müde (German for O. Weary).

The New York Times credits bookstore owner Andreas Brown and his store, the Gotham Book Mart, with launching Gorey's career: "it became the central clearing house for Mr. Gorey, presenting exhibitions of his work in the store's gallery and eventually turning him into an international celebrity."[6]

Gorey's illustrated (and sometimes wordless) books, with their vaguely ominous air and ostensibly Victorian and Edwardian settings, have long had a cult following. He made a notable impact of the world of theater with his designs for the 1977 Broadway revival of Dracula, for which he won the Tony Award for Best Costume Design and was nominated for the Tony Award for Best Scenic Design. In 1980, Gorey became particularly well known for his animated introduction to the PBS series Mystery! In the introduction of each Mystery! episode, host Vincent Price would welcome viewers to "Gorey Mansion". 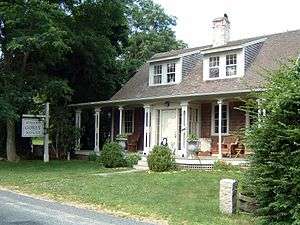 Because of the settings and style of Gorey's work, many people have assumed he was British; in fact, he only left the U.S. once, for a visit to the Scottish Hebrides. In later years, he lived year-round in Yarmouth Port, Massachusetts, on Cape Cod, where he wrote and directed numerous evening-length entertainments, often featuring his own papier-mâché puppets, an ensemble known as Le Theatricule Stoique. The first of these productions, Lost Shoelaces, premiered in Woods Hole, Massachusetts on August 13, 1987. The last was The White Canoe: an Opera Seria for Hand Puppets, for which Gorey wrote the libretto, with a score by the composer Daniel James Wolf. Based on Thomas Moore's poem The Lake of the Dismal Swamp, the opera was staged after Gorey's death and directed by his friend, neighbor, and longtime collaborator Carol Verburg, with a puppet stage made by his friends and neighbors, the noted set designers Herbert Senn and Helen Pond. In the early 1970s, Gorey wrote an unproduced screenplay for a silent film, The Black Doll.

Gorey was noted for his fondness for ballet (for many years, he religiously attended all performances of the New York City Ballet), fur coats, tennis shoes, and cats, of which he had many. All figure prominently in his work. His knowledge of literature and films was unusually extensive, and in his interviews, he named Jane Austen, Agatha Christie, Francis Bacon, George Balanchine, Balthus, Louis Feuillade, Ronald Firbank, Lady Murasaki Shikibu, Robert Musil, Yasujirō Ozu, Anthony Trollope and Johannes Vermeer as some of his favorite artists. Gorey was also an unashamed pop-culture junkie, avidly following soap operas and television comedies such as Petticoat Junction and Cheers, and he had particular affection for dark genre series such as Buffy the Vampire Slayer, Batman: The Animated Series and The X-Files; he once told an interviewer that he so enjoyed the Batman series that it was influencing the visual style of one of his upcoming books. Gorey treated television commercials as an art form in themselves, even taping his favorites for later study. Gorey was especially fond of movies, and for a time he wrote regular reviews for the Soho Weekly under the pseudonym Wardore Edgy.

After Gorey's death, one of his executors, Andreas Brown, turned up a large cache of unpublished work, some completed, some incomplete. Brown described the find as "Ample material for many future books and for plays based on his work."[7]

Although Gorey's books were popular with children, he did not associate with children much and had no particular fondness for them. Gorey never married, professed to have little interest in romance, and never discussed any specific romantic relationships in interviews. In the book The Strange Case of Edward Gorey, published after Gorey's death, his friend Alexander Theroux reported that when Gorey was pressed on the matter of his sexual orientation, he said that even he was not sure whether he was gay or straight. When asked what his sexual orientation was in an interview, he said,

Edward Gorey agreed in an interview that the "sexlessness" of his works was a product of his asexuality.[8]

From 1995 to his death in April 2000, the normally reclusive artist was the subject of a cinéma vérité-style documentary directed by Christopher Seufert. (As of 2016, the film has been screened as a work-in-progress; the finished film and accompanying book are slated for 2017.) He was interviewed on Tribute to Edward Gorey, an hour-long community, public-access television cable show produced by artist and friend Joyce Kenney. He contributed his videos and personal thoughts. Edward served as a judge at Yarmouth art shows and enjoyed activities at the local cable station, studying computer art and serving as cameraman on many Yarmouth shows. His Cape Cod house is called Elephant House and is the subject of a photography book entitled Elephant House: Or, the Home of Edward Gorey, with photographs and text by Kevin McDermott. The house is now the Edward Gorey House Museum.[9]

Gorey left the bulk of his estate to a charitable trust benefiting cats and dogs, as well as other species, including bats and insects.[7] 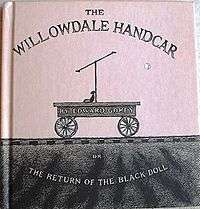 Cover of The Willowdale Handcar (1962)

Gorey is typically described as an illustrator. His books may be found in the humor and cartoon sections of major bookstores, but books such as The Object Lesson have earned serious critical respect as works of surrealist art. His experimentation — creating books that were wordless, books that were literally matchbox-sized, pop-up books, books entirely populated by inanimate objects — complicates matters still further. As Gorey told Richard Dyer of The Boston Globe, "Ideally, if anything were any good, it would be indescribable." Gorey classified his own work as literary nonsense, the genre made most famous by Lewis Carroll and Edward Lear.

In response to being called gothic, he stated, "If you're doing nonsense it has to be rather awful, because there'd be no point. I'm trying to think if there's sunny nonsense. Sunny, funny nonsense for children — oh, how boring, boring, boring. As Schubert said, there is no happy music. And that's true, there really isn't. And there's probably no happy nonsense, either."[10]

Gorey wrote more than 100 books, including the following: 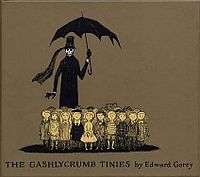 Many of Gorey's works were published obscurely and are difficult to find (and priced accordingly), however, the following four omnibus editions collect much of his material. Because his original books are rather short, these editions may contain 15 or more in each volume.

Gorey was very fond of word games, particularly anagrams. He wrote many of his books under pseudonyms that usually were anagrams of his own name (most famously Ogdred Weary). Some of these are listed below, with the corresponding book title(s). Eduard Blutig is also a word game: "Blutig" is German (the language from which these two books purportedly were translated) for "bloody" or "gory".

Gorey has become an iconic figure in the goth subculture. Events themed on his works and decorated in his characteristic style are common in the more Victorian-styled elements of the subculture, notably the Edwardian costume balls held annually in San Francisco and Los Angeles, which include performances based on his works. The "Edwardian" in this case refers less to the Edwardian period of history than to Gorey, whose characters are depicted as wearing fashion styles ranging from those of the mid-nineteenth century to the 1930s.

A more direct link to Gorey's influence on the music world is evident in The Gorey End,[14] an album recorded in 2003 by The Tiger Lillies and the Kronos Quartet. This album was a collaboration with Gorey, who liked previous work by The Tiger Lillies so much that he sent them a large box of his unpublished works, which were then adapted and turned into songs. Gorey died before hearing the finished album.

In 1976, jazz composer Michael Mantler recorded an album called The Hapless Child (Watt/ECM) with Robert Wyatt, Terje Rypdal, Carla Bley, and Jack DeJohnette. It contains musical adaptations of The Sinking Spell, The Object Lesson, The Insect God, The Doubtful Guest, The Remembered Visit, and The Hapless Child. The last three songs also have been published on his 1987 Live album with Jack Bruce, Rick Fenn, and Nick Mason.

The opening titles of the PBS series Mystery! are based on Gorey's art, in an animated sequence co-directed by Derek Lamb.

In the last few decades of his life, Gorey merchandise became quite popular, with stuffed dolls, cups, stickers, posters, and other items available at malls around the United States.

In 2007, the Jim Henson Company announced plans to produce a feature film based on The Doubtful Guest to be directed by Brad Peyton. No release date was given and there has been no further information since the announcement.

The Creature Feature song "A Gorey Demise" was inspired by The Gashlycrumb Tinies.

The online journal Goreyesque publishes artwork, stories, and poems in the spirit of Edward Gorey's work.[15] The journal is co-sponsored by the Department of Creative Writing at Columbia College Chicago and Loyola University Chicago.[16] Goreyesque was launched in tandem with the Chicago debut of two Gorey collections: Elegant Enigmas: The Art of Edward Gorey and G is for Gorey. The collections were shown at the Loyola University Museum of Art (LUMA) in Chicago, Illinois from February 15 to June 15, 2014.[17][18] Goreyesque features the work of both emerging talents and seasoned professionals, such as writers Sam Weller and Joe Meno.[19][20][21]

In Spring 2016, a play loosely based on Gorey's life called, Gorey: The Secret Lives of Edward Gorey will premiere in New York City.[22]