Maynard Dixon (January 24, 1875 – November 11, 1946) was a 20th-century American artist whose body of work focused on the American West. He was married for a time to American photographer Dorothea Lange.

Dixon was born in Fresno, California, into a family of aristocratic Virginia Confederates who had found a new home there after the American Civil War. His mother, a well-educated daughter of a Navy officer from San Francisco, shared her love of classic literature with the young boy and encouraged him in his writing and drawing. Dixon later studied briefly with the tonalist painter Arthur Mathews at the California School of Design where he became close friends with Xavier Martinez and others of the Bohemian Club. To support himself he accepted numerous illustration jobs. Great illustrators were plentiful around the turn of the century, yet Dixon obtained work from the Overland Monthly and several San Francisco newspapers. 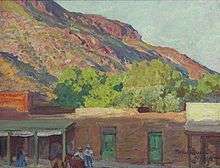 In 1900 Dixon visited Arizona and New Mexico. This was the start of his lifelong passion for roaming the West. The next year he accompanied artist Edward Borein on a horseback trip through several Western states. In California, he illustrated books and magazines with Western themes. Some of his most memorable work from these early years appeared in Clarence Mulford’s books about Hopalong Cassidy. For a time he lived in New York with his young wife and baby daughter Constance, but soon returned to the western United States where he said he could create “honest art of the west” instead of the romanticized versions he was being paid to create. Shortly after he began a new life in San Francisco, his first marriage ended.

Dixon developed his style during this early period, and Western themes became a trademark for him. In San Francisco, Dixon was considered a colorful character with a good sense of humor. He often dressed like a cowboy and seemed determined to impart a Western style, most often in the form of a black Stetson, boots and a bolo tie.

Dixon contributed to the murals which adorn a banquet hall at the Mark Hopkins Hotel. Here, Queen Califia is shown accompanied by two of her woman warriors

Influenced in part by the Panama Pacific International Exposition of 1915, Dixon began to search for a new expression, moving away from impressionism and into a simpler, more modern style. Meeting and marrying Dorothea Lange, a portrait photographer from the East, had a great influence on his art. They married in 1920 and by 1925, the year their first son Daniel Rhoades Dixon was born, Maynard’s style had changed dramatically to even more powerful compositions, with the emphasis on design, color, and self-expression. A true modernist emerged. The power of low horizons and marching cloud formations, simplified and distilled, became his own brand and at once were both bold and mysterious. In 1929 his second son was born, John Eaglefeather Dixon.

During the Great Depression, Dixon painted a series of social realism canvases depicting the prevailing politics of maritime strikes, displaced workers, and those affected by the depression. Simultaneously, Lange captured on film images of the migrant workers in the Salinas Valley and the city breadlines, images that eventually brought her fame. In 1933 the Dixons spent the summer in Zion National Park with sojourns to the hamlet of Mount Carmel, Utah. Lange was called back to San Francisco, a separation which led to the couple's divorce in 1935. 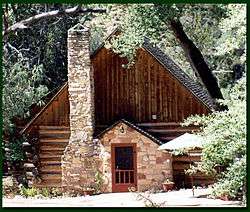 Two years later, Dixon married San Francisco muralist Edith Hamlin. The couple left San Francisco two years later for southern Utah, the source of some of Dixon’s greatest art. In 1939, the couple built a summer home in Mount Carmel, where Dixon found new friends and became reacquainted with the local natural landscapes. He lived near the cottonwood trees along an old irrigation ditch and took short hikes to a plateau where he loved the quiet. Dixon spent winter months in Tucson, where the couple also had a home and studio.

Dixon continued to create simple but powerful compositions in which non-essential elements were distilled or eliminated. In 1946, Maynard died at his winter home in Tucson. In the spring of 1947, his widow Edith brought his ashes to Mount Carmel where she buried them on a high bluff above the art studio being built on the property. This had been at his request and she felt it a fitting tribute where friends could come to pay respects and view the land that he loved.

In addition to painting, he also wrote poetry. An article in the California Historical Quarterly describe his poetry as "very competent and sometimes superb".[2]

There are two museums devoted to Maynard Dixon and his works.

The Maynard and Edith Hamlin Dixon House and Studio, operated by the Thunderbird Foundation, offers guided tours by appointment of his home and studio in Mount Carmel, Utah. The Foundation is working to establish a separate museum and regional art center that would feature works by Maynard Dixon and his circle, Milford Zornes and his circle, as well as contemporary work by local artists.[3]

The Maynard Dixon Museum is located inside the Mark Sublette Medicine Man Gallery in Tucson, Arizona.[4] Works by the artist include paintings, watercolors, pastels, drawings, poetry and illustrations.