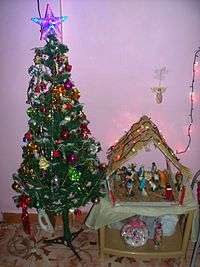 A Nativity scene and a Christmas tree, two popular decorations displayed by Christians during Christmastide

Christmastide (also Christmas Time or the Christmas season), also known as Twelvetide, is a season of the liturgical year in most Christian churches.[1]

There are several celebrations within Christmastide, including Christmas Day (25 December), St. Stephen's Day (26 December), Childermas (28 December), New Year's Eve (31 December), the Feast of the Circumcision of Christ, the Solemnity of Mary, Mother of God and New Year's Day (1 January), as well as Epiphany Eve or Twelfth Night (the evening of 5 January).[9]

Customs of the Christmas season include carol singing,[10] gift giving,[11] seeing Nativity plays,[12] attending church services,[13] and eating special food, such as Christmas cake.[14] Traditional examples of Christmas greetings include the Western Christian phrase "Merry Christmas and a Happy New Year!" and the Eastern Christian greeting "Christ is born!", to which others respond, "Glorify Him!"[15][16]

Christmastide begins very early on 25 December. Historically, the ending of Christmastide was 5 January. This traditional date is still followed by the Anglican Church and Lutheran Church, where Christmastide, commonly called the Twelve Days of Christmas, lasts 12 days, from 25 December to 5 January, the latter date being named as Twelfth Night.[17][18]

However, the ending is defined differently by some Christian denominations.[17] In 1969, the Roman Rite of the Catholic Church expanded Christmastide by a variable number of days: "Christmas Time runs from... up to and including the Sunday after Epiphany or after 6 January."[7] Before 1955, the 12 Christmastide days in the Roman Rite (25 December to 5 January) were followed by the 8 days of the Octave of Epiphany, 6–13 January, and its 1960 Code of Rubrics defined "Christmastide" as running "from I vespers of Christmas to none of 5th January inclusive".[19]

In 567, the Council of Tours "proclaimed the twelve days from Christmas to Epiphany as a sacred and festive season, and established the duty of Advent fasting in preparation for the feast."[20][21][22][23][24][25] Christopher Hill, as well as William J. Federer, states that this was done in order to solve the "administrative problem for the Roman Empire as it tried to coordinate the solar Julian calendar with the lunar calendars of its provinces in the east."[26][27][28] Ronald Hutton adds that, while the Council of Tours declared the 12 days one festal cycle, it confirmed that three of those days were fasting days, dividing the rejoicing days into two blocs.[29] The Council held at Tours also spoke of a three-day fast at the beginning of January as an ancient custom, and ordered monks to observe it.[30][31] In that canon, which dealt with the fasts to be observed by monks,[32] the council decreed:

(On fasting ... In August, because each day there are Masses of the saints, let them have a full meal. ... In December until Christmas, they are to fast each day. Since between the Nativity of the Lord and Epiphany there are feasts on each day, they shall have a full meal, except during the three-day period on which our Fathers established private litanies for the beginning of January, in order to tread down the custom of the Gentiles.)

In medieval era Christendom, Christmastide "lasted from the Nativity to the Purification."[33][34] To this day, the "Christian cultures in Western Europe and Latin America extend the season to forty days, ending on the Feast of the Presentation of Jesus in the Temple and the Purification of Mary on 2 February, a feast also known as Candlemas because of the blessing of candles on this day, inspired by the Song of Simeon, which proclaims Jesus as 'a light for revelation to the nations'."[35] Many Churches refer to the period after the traditional Twelve Days of Christmas and up to Candlemas, as Epiphanytide, also called the Epiphany season.[8][36] 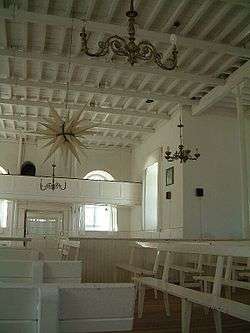 The Moravian star is a common decoration seen in many Christian households and churches, especially those of Moravians, during Christmastide and Epiphanytide

In the Anglian city of Oxford, many Christian families, after attending church, celebrate this period through serving a traditional dish called Boar’s head.[44] In several parts of the world, it is common to have a large family feast on Christmas Day, preceded with grace. Desserts such Christmas cake are unique to Christmastide; in India, a version known as Allahabadi cake is popular among the Christian population and consumption of it has spread to other parts of the world.[14] During the Christmas season, it is also very common for Christmas carols to be sung at Christian churches, as well as at the footsteps of houses—in the latter scenario, groups of Christians go from one house to another sing Christmas carols, a form of evangelism.[10] Popular Christmas carols include "Silent Night", "Come, Thou Long Expected Jesus", "We Three Kings", "Down in Yon Forest", "Away in a Manger", "I Wonder as I Wander", "God Rest Ye Merry, Gentlemen", "There's a Song in the Air", and "Let all mortal flesh keep silence".[45] In the Christmas season, as with Eastertide, it is very common for television stations to air feature films relating to Christmas and Christianity in general, such as The Greatest Story Ever Told and Scrooge.[46]

In Russia, Christmastide, understood as the period between Orthodox Christmas and Epiphany, is often referred to as "Svyatki". During this period, Russians perform fortunetelling by the use of shadows, candles, wax, and boots to predict future marriages. Maidens who participate in the ceremony have to shed everything that “hinders” the flow of spirits including their belts and rings. They also have to let their hair down. 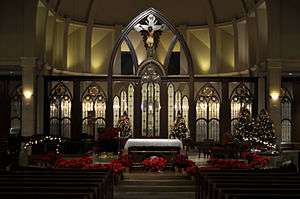 Midnight Mass is held in many Christian churches toward the end of Christmas Eve, often with dim lighting and traditional decorative accents such as greenery

In places where Epiphany is celebrated later than 6 January:

After celebration of Epiphany:

In the Eastern Orthodox Church, Christmas is the third most important feast (after Pascha and Pentecost). The day after, the Church celebrates the Synaxis of the Theotokos. This means that Saint Stephen's day and the feast of the Holy Innocents fall one day later than in the West. The coming of the Wise Men is celebrated on the feast itself. For more information, see Nativity Fast and Christmas Eve.