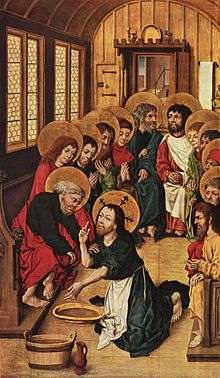 Christ Washing the Feet of the Apostles by Meister des Hausbuches, 1475 (Gemäldegalerie, Berlin

In the Anglican, Lutheran, Methodist, and Reformed traditions, the Paschal Triduum falls within the liturgical season of Lent in the Church calendar; however, in the Roman Catholic tradition, since the 1955 reform by Pope Pius XII, the Easter Triduum has been more clearly distinguished as a separate liturgical period. Previously, all these celebrations were advanced by more than twelve hours. The Mass of the Lord's Supper and the Easter Vigil were celebrated in the morning of Thursday and Saturday respectively, and Holy Week and Lent were seen as ending only on the approach of Easter Sunday.

After the Gloria in Excelsis Deo at the Mass of the Lord's Supper all church bells are silenced and the organ is not used. The period that lasted from Thursday morning to before Easter Sunday began was once, in Anglo-Saxon times, referred to as "the still days".[5]

In the Catholic Church, weddings, which were once prohibited throughout the entire season of Lent and during certain other periods as well,[6] are prohibited during the Triduum. Lutherans still discourage weddings during the entirety of Holy Week and the Easter Triduum.

In some Protestant denominations, the Triduum begins with an evening worship service on Maundy Thursday.[7]

In the Catholic Church, in the Mass of the Lord's Supper, during the Gloria in Excelsis Deo, all church bells may be rung and the organ played; afterwards, bells and organ are silenced until the Gloria of the Easter Vigil.[3] After the homily of the Mass, "where a pastoral reason suggests it", a ritual washing of the feet follows.[3][8] The Mass concludes with a procession of the Blessed Sacrament to the altar of repose.[3] Eucharistic adoration is encouraged after this, but if continued after midnight should be done without outward solemnity.[3] Some faithful travel to several churches to pray at their Altar of Repose, a practice called Seven Churches Visitation. In the form of the Roman Rite in use before 1955, there was no washing of the feet, which could instead be done in a separate later ceremony, and the Mass concluded with a ritual stripping of all altars, except the altar of repose, but leaving the cross and candlesticks. In the present form as revised in 1955, the altar is stripped bare without ceremony later. 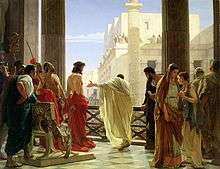 On Good Friday, Christians recall the passion and crucifixion of Jesus

In the Roman Catholic, Lutheran, and Anglo-Catholic/Episcopal rites, a cross or crucifix (not necessarily the one that stands on or near the altar on other days of the year) is ceremonially unveiled.[12] (In pre-1955 services, other crucifixes were to be unveiled, without ceremony, after the Good Friday service.) In the Catholic ritual, clergy traditionally begin the service prostrate in front of the altar. Mass is not celebrated on Good Friday and the communion distributed at the Celebration of the Lord's Passion is consecrated on Holy Thursday, hence the pre-1955 name "Mass of the Presanctified". In Anglican/Episcopal churches, there is no prayer of consecration on Good Friday, and the Reserved Sacrament is distributed at services on that day. Also in Catholicism, images of saints may, in accordance with local custom, be veiled throughout the last two weeks of Lent. Votive lights before these images are not lit. Crucifixes that are movable are hidden, while those that are not movable are veiled until after the Good Friday service.[13] Catholic faithful typically venerate the crucifix by kissing the feet of the corpus. Veneration of a simple wooden cross is common in Anglican/Episcopal worship, with the faithful touching and or kissing it.

Colors of vestments (and hangings, if kept) vary: no color, red, or black are used in different traditions. The Catholic Church uses red vestments, symbolic of the blood of Jesus Christ, but in the pre-1970 form of the Roman Missal the priest wears black, changing to violet for the communion part of the service. In Anglican/Episcopal services, black vestments are sometimes used. In The United Methodist Church, black is the liturgical colour used on Good Friday.[14] In the Lutheran churches, there is no liturgical color on Good Friday. Altars remain stripped and clergy wear no vestments on this day.

Holy Saturday, also known as Black Saturday, is a commemoration of the day that Jesus lay in his tomb. In the Catholic Church, daytime Masses are never offered. In Anglican/Episcopal worship, there is no prayer of consecration or distribution of Reserved Sacrament on Holy Saturday, but a simple service of scripture readings and prayers may be held. 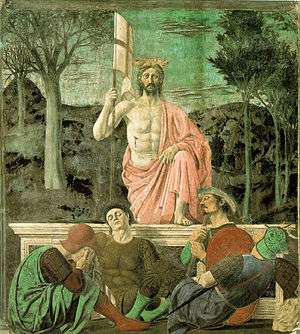 A vigil service is held after nightfall on Holy Saturday, or before dawn on Easter Sunday, in celebration of the resurrection of Jesus. Many of the details that follow hold for Anglican/Episcopal as well as Catholic worship. The ceremony of darkness and light is held at the beginning of the Easter Vigil Mass. The paschal candle, whose lighting symbolizes the resurrection of Christ from the dead,[15] is lit from the new Easter fire. The solemn procession to the altar with the Paschal candle is formed. Once everyone has processed in, the Exsultet is intoned.

In Catholic practice, during the Gloria at the Mass, the organ and church bells are used in the liturgy for the first time in two days.[19] If the lights of the Church have been previously left off, they are turned on as the Gloria begins. The Paschal candle is used to bless the baptismal font to be used in the celebration of the sacrament. The Great Alleluia is sung before the Gospel is read, Alleluia being used for the first time since before Lent. People receiving full initiation in the Church, who have completed their training, are given the Sacraments of Christian initiation (Baptism, confirmation, and the Holy Eucharist). In Catholic and Anglican/Episcopal tradition, the Easter Vigil is an especially appropriate day for Holy Baptism.

In current practice, the use of lighting to signify the emergence from sin and the resurrection of Jesus varies, from the use of candles held by parishioners as well as candelabras lit throughout the church. If statues and images have been veiled during the last two weeks of Lent, they are unveiled, without ceremony, before the Easter Vigil service begins.[13] (In the 1962 Catholic missal and earlier missals, they are unveiled during the "Gloria in Excelsis" of the Easter Vigil Mass.)

Color of vestments and hangings: white, often together with gold, with yellow and white flowers often in use in many parishes.

Easter Masses are held throughout the day and are similar in content to the Easter Vigil Mass.

The date of Easter varies from year to year. It occurs on the first Sunday after the first full moon on or after 21 March, a date taken, in accordance with an ancient ecclesiastical tradition, to be that of the spring equinox, but which does not always correspond to the astronomical equinox. The Julian Calendar is taken as the basis of the calculations by nearly all Oriental Orthodox and Eastern Orthodox Churches and is accepted even by Latin Church Catholics in countries such as Ethiopia and Greece. In the 20th and 21st centuries, the Julian Calendar's 21 March corresponds to 3 April in the Gregorian Calendar, the calendar used for civil purposes in most countries. The earliest possible date for Easter is 22 March, and the latest 25 April. These dates in the Julian Calendar now correspond to the Gregorian Calendar's 4 April and 8 May.

During the Easter octave (and also during Holy Week) no other feast is celebrated. If Easter is very early, the solemnity of the Annunciation (25 March) may fall within the octave or Holy Week and is then transferred to the Monday after the octave.[20]

The Sundays of Advent, Lent, and Easter have precedence over all feasts and solemnities, solemnities being then transferred to the following Monday, unless they occur on Palm Sunday or on Sunday of the Lord's Resurrection.[21] "The Solemnity of Saint Joseph, where it is observed as a Holyday of Obligation, should it fall on Palm Sunday of the Lord's Passion, is anticipated on the preceding Saturday, 18 March. Where, on the other hand, it is not observed as a Holyday of Obligation, it may be transferred by the Conference of Bishops to another day outside Lent."[22]

The solemnity of the Ascension is on the fortieth day of Easter, which is always a Thursday, although it may be observed on the following Sunday. Pentecost (or Whitsun) is the fiftieth day.

The Easter season extends from the Easter Vigil through Pentecost Sunday on the Roman Catholic, Anglo-Catholic and Protestant calendars. In the pre-1970 Roman Catholic calendar the octave of Pentecost is included in Eastertide, which thus ends at None of the following Ember Saturday.

During the 50-day Easter period, vestments are generally white or gold, but red when celebrating apostles and martyrs and on the solemnity of Pentecost. In the pre-1970 Roman Catholic calendar, with its 56-day Eastertide, red was used during the octave of Pentecost.