Cilegon is a major coastal industrial city in Banten province, Indonesia, covering 175.51 km2. It has a Census population of 374,464 in 2010; the official intercensal estimated population was 416,464 for 2014.[2] Among the factories located in Cilegon are Krakatau Steel Company, a vital company in Indonesia, which produces steel for industrial (domestic and foreign) needs, and Asahimas Chemical Company. The other name for Cilegon is "Steel City" since the city is the largest steel producer in Southeast Asia, about 6 million tons of steel produced each year in the Industrial Area Krakatau Steel, Cilegon. Additionally Cilegon is one of the vital state objects. This is because in this town there is a wide range of other vital objects such as the Merak Harbour, Krakatau Steel Industrial Zone (including the PT. Krakatau Steel Tbk, Asahimas, Siemens, KS - POSCO joint venture, Chandra Asri, and Pertamina), PLTU Suralaya, Power plant Krakatau, Krakatau Tirta Industrial Water Treatment Plant, The Sunda Strait Bridge Construction (Lot Plan) & Sunda Strait Industrial Zones. 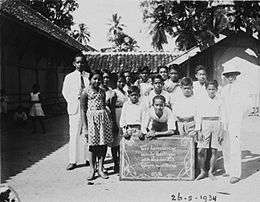 Cilegon is located on the most northwest coast of Java island, at the mouth of the Cilegon River on Ciwandan Bay, which is an inlet of the Sunda Straits.

The City of Cilegon is divided into eight districts (kecamatan), listed below with their populations at the 2010 Census:[3]

Cilegon has a hot and humid climate on the boundary between tropical monsoon (Am) and savanna (Aw) according to the Köppen climate classification system. Despite being located relatively close to the equator, the city has distinct wet and dry seasons. The wet season in Cilegon covers the majority of the year, running from November through June. The remaining four months forms the city’s dry season. Located in the most western part of Java, Cilegon’s wet season rainfall peak is January with average monthly rainfall of 389 millimetres (15.3 in), and its dry season low point is July with a monthly average of 30 millimetres (1.2 in).