For the Banten meteorite of 1933, see Meteorite falls. For the sultanate, see Banten Sultanate. For the city and harbor, see Banten (city).

Banten is the westernmost province on the island of Java, in Indonesia. The provincial capital city is Serang.

The population of Banten was officially estimated at 11,834,087 at the start of 2014, up from over 10.6 million during the 2010 census.[3] Formerly part of the province of West Java, Banten became a separate province in 2000. The province is a transit corridor to the neighbouring Indonesian island of Sumatra.

Historically, it has had a culture distinct from the rest of Java and that of the broader Indonesian archipelago. In recent years, the northern half, particularly those areas near Jakarta and the Java Sea coast, have experienced rapid rises in population and urbanization, while the southern half, particularly that facing the Indian Ocean, maintains more of its traditional character. 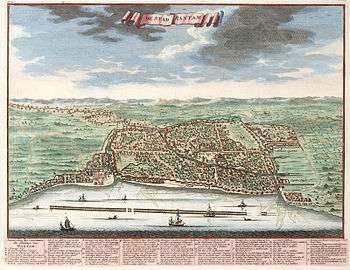 In the 5th century, Banten was part of the Kingdom of Tarumanagara. The Lebak relic inscriptions, found in lowland villages on the edge of Ci Danghiyang, Munjul, Pandeglang, Banten, were discovered in 1947 and contains 2 lines of poetry with Pallawa script and Sanskrit language. The inscriptions speak of the courage of king Purnawarman. After the collapse of the Tarumanagara kingdom, due to an attack by Srivijaya, power in the western Java fell to the Kingdom of Sunda. The Chinese source, Chu-fan-chi, written circa 1225, Chou Ju-kua mentioned that in the early 13th Century, Srivijaya still ruled Sumatra, the Malay peninsula, and western Java (Sunda). The source identifies the port of Sunda as strategic and thriving, pepper from Sunda being among the best in quality. The people worked in agriculture and their houses were built on wooden poles (rumah panggung). However, robbers and thieves plagued the country.[4] It was highly possible that the port of Sunda mentioned by Chou Ju-kua was probably refer to the port of Banten.

According to the Portuguese explorer, Tome Pires, in the early 16th century the port of Bantam (Banten) was an important port within the Kingdom of Sunda along with the ports of Pontang, Cheguide (Cigede), Tangaram (Tangerang), Calapa (Sunda Kelapa) and Chimanuk (estuarine of Cimanuk river).[5]

In 1527, just as the Portuguese fleet was arriving off the coast, newly converted Javanese Muslims under Sunan Gunungjati captured the port of Banten and the surrounding area from the Sundanese leaders and established the Sultanate of Banten. The center of this sultanate, according to J. de Barros, was Banten which was a major port in Southeast Asia rivaling Malacca and Makassar. The city of Banten was located in middle of the bay which is around three miles across. The city was 850 fathoms in length while the seaside town was 400 fathoms in length. Through the middle of town there was a clear river which ships and gale junks could sail into. There is a small tributary of the river extending to the edges of the town. Today, the river is not so large and only small boats can enter. There was a fortress very near to the town whose walls were made of brick and was seven palms wide. There were wooden defense buildings consisting of two levels and armed with good weapons. The middle of the town square was used for military activities and folk art, and as a market in the morning. The king's palace was located on the southern side of the square. Beside the building was an elevated and flat-roofed, called Srimanganti, which was used by the king when meeting the people. To the west of the square was a great mosque.

In the early 17th century, Banten was an important commercial center on international trade routes in Asia. At the time, the administration and governance of port were very supportive of economic growth. Its territory included the area which is now the province of Lampung in southern Sumatra.

When the Dutch arrived in Indonesia the Portuguese had long been in Banten. The English established a representative site in Banten, a "factory", and were followed by the Dutch. In addition, the French and Danes also came to trade in Banten. In the ensuring competition between the European traders, the Dutch emerged as the winners. The Portuguese fled Banten in (1601) after their fleet was destroyed by the Dutch fleet off the coast of Banten. While the coastal areas of Banten came under Dutch influence, the sultanate kept control over the inland region until 1813. In that year, the sultanate was abolished and transformed into a residency of the Dutch East Indies.[6]

After Indonesia became independent, Banten was absorbed into the province of West Java. However, separatist sentiment ultimately led to the creation of the province of Banten in 2000.[6]

Banten is located near the Sunda Strait's strategic sea lanes that link Australia and New Zealand to Southeast Asia. Banten's ports accommodate the excess capacity of sea ports from Jakarta.

Banten Province is subdivided into four regencies (kabupaten) and four autonomous cities (kota), listed below with their populations at the 2000 and 2010 Censuses, together with the latest (2014) official estimates. The cities and regencies are additionally subdivided into 140 districts, 262 urban villages and 1,242 villages.

At the time of the formation of Banten Province, Djamal Hakamudin was appointed as the first governor by the Indonesian central government. In 2002, the Banten provincial parliament (Dewan Perwakilan Rakyat Daerah or DPRD) chose Djoko Munandar and Ratu Atut Chosiyah as governor and deputy governor of Banten respectively. In early 2006, after Djoko Munandar was suspended during an investigation into alleged corruption, Ratu Atut Chosiyah was appointed as acting governor . Finally, on 6 December 2006, a provincial election was held which was won by Ratu Atut Choisiyah as governor and Mohammad Masduki as deputy governor; both served in the period 2007-2011.

A major highway connecting Jakarta and Merak runs along the northern coast, divided into sections. It is composed of the Tangerang–Merak Toll Road and the Jakarta–Tangerang Toll Road, and forms part of the Trans-Java toll road.

The province has the nation's busiest ferry terminals to Lampung on the island of Sumatra.

The only commercial airport in the province is the largest airport of the country, Soekarno–Hatta International Airport, which primarily serves the Greater Jakarta area, also known as Jabodetabek. The airport is located in the city of Tangerang. There are plans for introducing scheduled air services at Pondok Cabe Airport in South Tangerang.