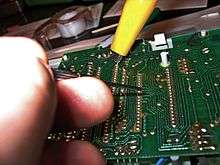 Probing for "bends" using a jeweler's screwdriver and alligator clips

Circuit bending is the creative, chance-based customization of the circuits within electronic devices such as low voltage, battery-powered guitar effects, children's toys and digital synthesizers to create new musical or visual instruments and sound generators.

Emphasizing spontaneity and randomness, the techniques of circuit bending have been commonly associated with noise music, though many more conventional contemporary musicians and musical groups have been known to experiment with "bent" instruments. Circuit bending usually involves dismantling the machine and adding components such as switches and potentiometers that alter the circuit.

A 1989 Kawasaki toy guitar used in a circuit bending project

Circuit bending is often practiced by those with no formal training in circuit theory or design, experimenting with second-hand electronics in a DIY fashion. Inexpensive keyboards, drum machines, and electronic children's toys (not necessarily designed for music production) are commonly used. Haphazard modifications can result in short circuits, resulting in the risk of fire, burning, or electrocution.

Aesthetic value, immediate usability and highly randomized results are often factors in the process of successfully bending electronics. Although the history of electronic music is often associated with unconventional sonic results, such innovators as Robert Moog[1] and Léon Theremin[2] were electrical engineers, and more concerned with the consistency and sound design of their instruments. Circuit bending is typified by inconsistencies in instruments built in an unscientific manner. While many pre-fitted circuit bent machines are on offer for sale at auction sites such as eBay, this somewhat contravenes the intention of most practitioners. Machines bent to a repeated configuration are more analogous to the well known practice of "mods", such as the Devilfish mod for the Roland TB-303, the famous Speak and Spell toys or various Analogman or Pedaldoc guitar pedal circuit modifications.

Circuit bending an audio device typically involves removing the rear panel of the device and connecting any two circuit locations with a "jumper" wire, sending current from one part of the circuit into another. Results are monitored through either the device's internal speaker or by connecting an amplifier to the speaker output. If an interesting effect is achieved, this connection would be marked for future reference or kept active by either soldering a new connection or bridging it with crocodile clips. Often other components are inserted at these points such as pushbuttons or switches, to turn the effect on or off; or components such as resistors or capacitors, to change the quality of the audio output. This is repeated on a trial and error basis. Other components added into the circuit can give the performer more expressiveness, such as potentiometers, photoresistors (for reaction to light) and pressure sensors. 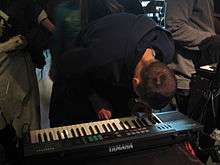 A Yamaha PSR-6 used in a circuit bending project.

The simplest input, and the one most identified with circuit bending, is the body contact,[3] where the performer's touch causes the circuit to change the sound. Often metal knobs, plates, screws or studs are wired to these circuit points to give easier access to these points from the outside the case of the device.

Since creative experimentation[4] is a key element to the practice of circuit bending, there is always a possibility that short circuiting may yield undesirable results, including component failure. In particular, connecting the power supply or a capacitor directly to a computer chip lead can destroy the chip and make the device inoperable. Before beginning to do circuit bending, a person should learn the basic risk factors about working with electrical and electronic products, including how to identify capacitors (which can give a person a serious shock due to the electrical charge that they store), and how to avoid risks with AC power. For safety reasons, a circuit bender should have a few basic electronics tools, such as a multimeter (an electronic testing device which measures voltage, resistance and other factors). It is advised that beginner circuit benders should never "bend" any device that gets its power from mains electricity (household AC power), as this would carry a serious risk of electrocution. Circuit bending can also be carried out in interactive electronic audio games. People modify their electronic games to enhance the quality of recordings used for fan-made projects or to change the speed of the game which results in a pitch change. This makes the gameplay easier, especially if the game gets impossibly fast. Adding a knob or a switch to change the pitch of the game can lead to some disadvantages which include the game can change its' pitch slightly when it's lights are turned on, and it can cause the batteries to drain out quickly on high speeds.

Although similar methods were previously used by other musicians and engineers, this method of music creation is believed to have been pioneered by Reed Ghazala in the 1960s. Ghazala's experience with circuit-bending began in 1966 when a toy transistor amplifier, by chance, shorted-out against a metal object in his desk drawer, resulting in a stream of unusual sounds.[5] While Ghazala says that he was not the first circuit bender, he coined the term Circuit Bending [6] and whole-heartedly promoted the proliferation of the concept and practice through his writings and internet site, earning him the title "Father of Circuit Bending".

Serge Tcherepnin, designer of the Serge modular synthesizers, discussed[7] his early experiments in the 1950s with the transistor radio, in which he found sensitive circuit points in those simple electronic devices and brought them out to "body contacts" on the plastic chassis. Prior to Mark's and Reed's experiments other pioneers also explored the body-contact idea, one of the earliest being Thaddeus Cahill (1897) whose telharmonium, it is reported, was also touch-sensitive. 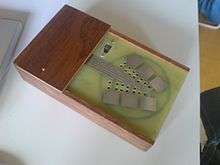