Live electronic music (also known as live electronics and electroacoustic improvisation) is any kind of music that can include the use of electroacoustic instruments, various electronic sound-generating devices, and computers, but which generally excludes the use of prerecorded or sampled material. Initially the practice developed in reaction to sound-based composition for fixed media such as musique concrète, electronic music and early computer music. Musical improvisation often plays a large role in the performance of this music. The timbres of various sounds may be transformed extensively using devices such as amplifiers, filters, ring modulators and other forms of circuitry (Sutherland 1994, 157). Widespread adoption of mobile computing has led to an increase in the use of computers in live electronics. Real-time generation and manipulation of audio using laptop computers is now commonplace. Electronic musicians often play partially pre-recorded music in Live PAs. 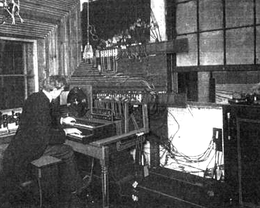 This Telharmonium console (likely pictured in the late 1890s) is an early electronic organ by Thaddeus Cahill, and one of the first electronic instruments used for live performance.

Early electronic instruments intended for live performance, such as Thaddeus Cahill's Telharmonium (1897) and instruments developed between the two world wars, such as the Theremin (1919), Spharophon (1924), ondes Martenot (1928), and the Trautonium (1929), may be cited as antecedents (Manning 2013, 157), but were intended simply as new means of sound production, and did nothing to change the nature of musical composition or performance (Collins 2007, 39).

Many early compositions included these electronic instruments, though the instruments were typically used as fill-ins for standard classical instruments. An example includes composer Joseph Schillinger, who in 1929 composed First Airphonic Suite for Theremin and Orchestra, which premièred with the Cleveland Orchestra with Leon Theremin as soloist. Percy Grainger, used ensembles of four or six theremins (in preference to a string quartet) for his two earliest experimental Free Music compositions (1935–37) because of the instrument's complete 'gliding' freedom of pitch (Gillies and Pear n.d.; Lewis 1991, chapter 4: "Program Notes". The ondes Martenot was also used as a featured instrument in the 1930s, and composer Olivier Messiaen used it in the Fête des Belles Eaux for six ondes, written for the 1937 International World's Fair in Paris (Hill and Simeone 2005, 74–75).

Cage’s Imaginary Landscape No. 1 (1939) was among the earliest compositions to include an innovative use of live electronic material; it featured two variable-speed phonograph turntables and sine-tone recordings (Collins 2007, 38–39). Cage's interest in live electronics continued through the 1940s and 1950s, providing inspiration for the formation of a number of live-electronic groups in America who came to regard themselves as the pioneers of a new art form (Manning 2013, 157). 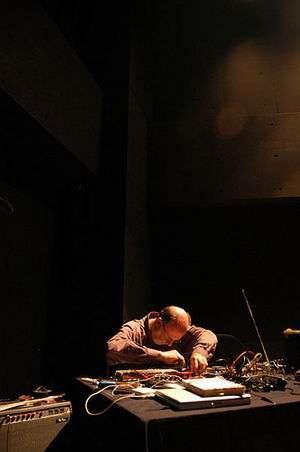 Keith Rowe (pictured in 2008) improvising with prepared guitar at a music festival in Tokyo.

Electroacoustic improvisation is a form of free improvisation that was originally referred to as live electronics. It has been part of the sound art world since the 1930s with the early works of John Cage (Schrader 1991, ; Cage 1960). Source magazine published articles by a number of leading electronic and avant-garde composers in the 1960s (Anon. n.d.(a)).

It was further influenced by electronic and electroacoustic music, the music of American experimental composers such as John Cage, Morton Feldman and David Tudor. British free improvisation group AMM, particularly their guitarist Keith Rowe, have also played a contributing role in bringing attention to the practice.

Electroacoustic improvisation sometimes differs significantly from music associated with the established free improvisation scene. One critic has suggested that a new vocabulary may be required to describe certain aspects of the practice. John Eyles writes,

One of the problems of describing this music is that it requires a new vocabulary and ways of conveying its sound and impact; such vocabulary does not yet exist—how do you describe the subtle differences between different types of controlled feedback? I’ve yet to see anyone do it convincingly—hence the use of words like "shape" and "texture"! (Eyles 2006)

In case you are as yet not indoctrinated into this music, there’s no easy road. The closest I know of to a simple explanation comes from the estimable Dominique Leone: "sort of an inverse of noise music." That sounds about right. If you think of noise as a brick wall, then EAI is like a plaster mold of the cement in-between, an impression, a photo-negative, more silence than sound; it’s a constant hum, the first step up from complete silence; noise stripped down to a single sliver and stretched out, presumably forever. (Siegel 2006)

Stockhausen (2 September 1972 at the Shiraz Arts Festival, at the sound controls for the live-electronic work Mantra), who wrote a number of notable electronic compositions in the 1960s and 1970s in which amplification, filtering, tape delay, and spatialization was added to live instrumental performance

In Europe, Pierre Schaeffer had attempted live generation of the final stages of his works at the first public concert of musique concrète in 1951 with limited success. However, it was in Europe at the end of the 1950s and early 1960s that the most coherent transition from studio electronic techniques to live synthesis occurred. Mauricio Kagel's Transición II (1959) combined two tape recorders for live manipulation of the sounds of piano and percussion, and beginning in 1964 Karlheinz Stockhausen entered on a period of intensive work with live electronics with three works, Mikrophonie I and Mixtur (both 1964), and Mikrophonie II (Manning 2013, 157–58). While earlier live-electronic compositions, such as Cage's Cartridge Music (1960), had mainly employed amplification, Stockhausen's innovation was to add electronic transformation through filtering, which erased the distinction between instrumental and electronic music (Toop 2002, 495).

During the 1960s, a number of composers believed studio-based composition, such as musique concrète, lacked elements that were central to the creation of live music, such as: spontaneity, dialogue, discovery and group interaction. Many composers viewed the development of live electronics as a reaction against "the largely technocratic and rationalistic ethos of studio processed tape music" which was devoid of the visual and theatrical component of live performance (Sutherland 1994, 157). By the 1970s, live electronics had become the primary area of innovation in electronic music (Simms 1986, 395).

The 1970s and 1980s were notable for contributions by electronic musician Jean Michel Jarre. The success of Oxygene and his large scale concerts which he performed attracted millions of people, breaking his own record for largest audience four times.[1][2][3][4] In fact Jarre continued to break his own records up to the end of the century, with 3.5 million people attending 1998's Oxygene in Moscow.[5] 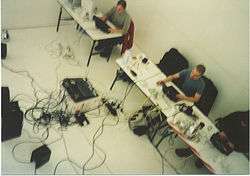 Laptronica is a form of live electronic music or computer music in which laptops are used as musical instruments. The term is a portmanteau of "laptop computer" and "electronica". The term gained a certain degree of currency in the 1990s and is of significance due to the use of highly powerful computation being made available to musicians in highly portable form, and therefore in live performance. Many sophisticated forms of sound production, manipulation and organization (which had hitherto only been available in studios or academic institutions) became available to use in live performance, largely by younger musicians influenced by and interested in developing experimental popular music forms (Emmerson 2007, ). A combination of many laptops can be used to form a laptop orchestra.

Live coding (Collins, McLean, Rohrhuber, and Ward 2003) (sometimes referred to as 'on-the-fly programming' (Wang and Cook 2004, ), 'just in time programming') is a programming practice centred upon the use of improvised interactive programming. Live coding is often used to create sound and image based digital media, and is particularly prevalent in computer music, combining algorithmic composition with improvisation (Collins 2003, ). Typically, the process of writing is made visible by projecting the computer screen in the audience space, with ways of visualising the code an area of active research (McLean, Griffiths, Collins, and Wiggins 2010, ). There are also approaches to human live coding in improvised dance (Anon. 2009). Live coding techniques are also employed outside of performance, such as in producing sound for film (Rohrhuber 2008, 60–70) or audio/visual work for interactive art installations (Anon. n.d.(b)).

Live coding is also an increasingly popular technique in programming-related lectures and conference presentations, and has been described as a "best practice" for computer science lectures by Mark Guzdial (2011).

Since the early 1900s there have been music festivals that featured electronic instruments, as electronic sounds were used in experimental music such as electroacoustic and tape music. The use of these sounds greatly expanded in the 1950s, along with the use of electric guitar and bass. With the advent of new technologies in the 1960s, electronic genres such as electronic rock, electronic jazz, disco, computer music, synthpop, electronica, psychedelic rock and ambient music grew to have large free festivals and rock festivals showcasing the sounds into the 1970s. Since the 1980s, genres such as techno, trance, house, and industrial all grew to have large festivals, raves, algoraves, doofs, or teknivals in their sole dedication.

The following is an incomplete list, in chronological order, of early notable electronic compositions: