Experimental rock (or avant-rock)[10] is a subgenre of rock music[1] which pushes the boundaries of common composition and performance technique[11] or which experiments with the basic elements of the genre.[12] Artists aim to liberate and innovate, with some of the genre's distinguishing characteristics being improvisational performances, avant-garde influences, odd instrumentation, opaque lyrics (or instrumentals), unorthodox structures and rhythms, and an underlying rejection of commercial aspirations.[2]

In the late 1960s and early 1970s, as Lou Reed put it, there were those were trying to become much better musicians, or much better players of their instruments at any rate, and those who were trying to forget what little they already knew. The presumption in the latter case was that technical skill was getting in the way of, or replacing, significance.

There was always experimentation in rock music, but it wasn't until the late 1960s that new openings were created from the aesthetic intersecting with the social.[14] In 1966, the boundaries between pop music and the avant-garde began to blur, and rock albums began to be conceived and executed as distinct, extended statements.[15] Rock musicians (mostly unschooled) in the middle and late 1960s drew from the work of composers such as John Cage, Karlheinz Stockhausen, and Luciano Berio. Academic Bill Martin acknowledges: "in the case of imitative painters, what came out was almost always merely derivative, whereas in the case of rock music, the result could be quite original, because assimilation, synthesis, and imitation are integral parts of the language of rock."[16]

The Beatles working in the studio with their producer George Martin, circa 1965

Martin argues that the advancing technology of multitrack recording and mixing boards were more influential to experimental rock than electronic instruments such as the synthesizer, allowing the Beatles and the Beach Boys to become the first crop of non-classically trained musicians to create extended and complex compositions.[17][nb 1] Drawing from the influence of the Beach Boys' Brian Wilson and the Beatles' George Martin, music producers after the mid 1960s began to view the recording studio as a musical instrument used to aid the process of composition.[19][nb 2] When the Beach Boys' Pet Sounds (1966) was released to a four-month chart stay in the British Top 10, many British groups responded to the album by making more experimental use of recording studio techniques.[22][nb 3] 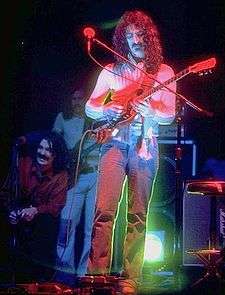 Frank Zappa with Captain Beefheart, seated left, during a 1975 concert

In the late 1960s, groups such as the Mothers of Invention, the Velvet Underground, the Fugs, the Beatles, and the Jimi Hendrix Experience began incorporating elements such as avant-garde music, sound collage, and poetry in their work.[26] Author Doyle Greene identifies the Beatles, Frank Zappa, the Velvet Underground, Plastic Ono Band, Captain Beefheart, and Nico as "pioneers of avant-rock", though also noted "proto-prog" bands such as Pink Floyd and the Soft Machine as an influence.[27] In addition, The Quietus' Ben Graham described duos the Silver Apples and Suicide as antecedents of avant-rock.[28]

In the opinion of Stuart Rosenberg, the first "noteworthy" experimental rock group was the Mothers of Invention led by composer Frank Zappa,[1] who professor Kelly Fisher Lowe claims "set the tone" for experimental rock with the way he incorporated "countertextural aspects ... calling attention to the very recordedness of the album."[29] This would also be reflected in other contemporary experimental rock LPs, such as the Beach Boys' Pet Sounds and Smile, the Who's The Who Sell Out (1967) and Tommy (1969), and the Beatles' Sgt. Pepper's Lonely Hearts Club Band (1967).[29] The Velvet Underground were a "groundbreaking group in experimental rock," according to Rosenberg, "even further out of step with popular culture than the early recordings of the Mothers of Invention."[30] The band were playing experimental rock in 1965 before other significant countercultural rock scenes had developed,[31] pioneering avant-rock through their integration of minimalist rock and avant-garde ideas.[32][nb 4]

The Beatles' album Sgt. Pepper's inspired the trend of experimental rock as commercially viable music.[34][nb 5] Once the group released their December 1967 film Magical Mystery Tour, author Barry Faulk writes, "pop music and experimental rock were [briefly] synonymous, and the Beatles stood at the apex of a progressive movement in musical capitalism".[35] As progressive rock developed, experimental rock acquired notoriety alongside art rock.[1][nb 6] By 1970, most of the musicians which had been at the forefront of experimental rock had incapacitated themselves.[37] From then on, the ideas and work of British artist and former Roxy Music member Brian Eno—which suggested that ideas from the art world, including those of experimental music and the avant-garde, should be deployed in the context of experimental rock—were a key innovation throughout the decade.[38]

In the late 1960s and early 1970s, Germany's "krautrock" scene (also referred to askosmische or elektronische musik) saw bands develop a form of experimental rock[5][39] that drew on rock sources, such as the Velvet Underground and Frank Zappa, as well as wider avant-garde influences.[26] Groups such as Can, Faust, Neu!, Amon Duul II, Ash Ra Tempel, Kraftwerk, Tangerine Dream, and Popol Vuh merged elements of improvisation and psychedelic rock with avant-garde and contemporary classical compositions,[39] as well as new electronic instrumentation.[26] The ideas of minimalism and composers such as Stockhausen would be particularly influential.[26] The movement was partly born out of the student movements of 1968, as German youth sought a unique countercultural identity[39][26] and wanted to develop a form of German music that was distinct from the mainstream music of the period.[5]

The late 1970s post-punk movement was devised as a break with rock tradition, exploring new possibilities by embracing electronics, noise, jazz and the classical avant-garde, and the production methods of dub and disco.[40] During this era, funk, jazz-rock, and fusion rhythms became integrated into experimental rock music.[41] Some groups who were categorized as "post-punk" considered themselves part of an experimental rock trajectory, with This Heat as one of the prominent players.[42] The late 1970s no wave scene consisted of New York experimental rock bands that aimed to break with new wave,[7] and who, according to Village Voice writer Steve Anderson, pursued an abrasive reductionism which "undermined the power and mystique of a rock vanguard by depriving it of a tradition to react against."[43] Anderson claims that the no wave scene represented "New York’s last stylistically cohesive avant-rock movement."[43] 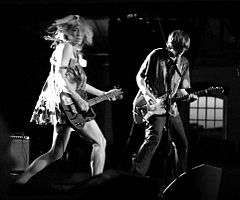 Sonic Youth perform in Sweden in 2007.

The early 1980s would see avant-rock develop significantly following the punk and new wave, DIY experimentation, electronic music, and musical cross-breeding of the previous decade, according to Pitchfork.[44] Dominique Leone of Pitchfork claims that the first wave of 1980s experimental rock groups, including acts such as Material, the Work, This Heat, Ornette Coleman's Prime Time, James Blood Ulmer, Last Exit, and Massacre, had few direct precedents for their sound.[44] Steve Redhead noted the resuscitation of New York's avant-rock scene, including artists such as Sonic Youth and John Zorn, in the 1980s.[45] According to journalist David Stubbs, "no other major rock group [...] has done as much to try to bridge the gap between rock and the avant garde" as Sonic Youth, who drew on improvisation and noise as well as the Velvet Underground.[46]

In the late 1980s, avant-rock pursued a "frazzled, psychedelia-tinged, 'blissed out'" aesthetic that differed from the self-consciousness and vigilance of earlier post-punk.[47] The UK shoegaze scene was seen by some as a continuation of an experimental rock tradition.[48] Pitchfork described contemporary acts My Bloody Valentine, Spacemen 3, and the Jesus and Mary Chain as "avant-rock icons."[49] According to Paul Hegarty and Martin Halliwell, some 1980s and early 1990s avant-rock acts such as the British musicians David Sylvian and Talk Talk returned to the ideas of progressive rock, which they call "post-progressive".[50] During the 1990s, a loose movement known as post-rock became the dominant form of experimental rock.[8] In a reaction against traditional rock music formula, post-rock artists combined standard rock instrumentation with electronics and influences from styles such as ambient music, IDM, krautrock, minimalism, and jazz.[8] In 2015, The Quietus' Bryan Brussee noted uncertainty with the term "experimental rock", and that "it seems like every rock band today has some kind of post-, kraut-, psych-, or noise- prefixed to their genre."[51]