Clayton is a small village at the foot of the South Downs in the Mid Sussex district of West Sussex, England.[1] It lies 41 miles (66 km) south of London, 6 miles (10 km) north of Brighton, and 28 miles (45 km) east northeast of the county town of Chichester. Other nearby towns include Burgess Hill to the north and Lewes, the county town of East Sussex east southeast. The Clayton Windmills, known as "Jack and Jill" sit on the hill above the village. 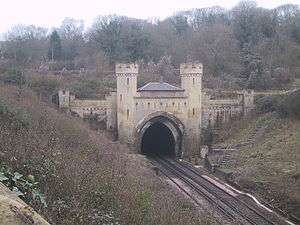 Clayton Tunnel, the longest tunnel (1¼ miles) on the London to Brighton railway line, begins in Clayton and runs up to 270 feet (82 m) below ground. The tunnel was built in the 1840s and cost £90,000. The farmer who owned the land would not grant access to the tunnel unless an edifice was built at its entrance, so the railway company built a castellated entrance around the tunnel.

In 1861 there was a collision at Clayton Tunnel between two trains killing 25 people and injuring 176 others, it was to become known as the Clayton Tunnel rail crash.

The little parish church of St. John the Baptist is an Anglo-Saxon church that has a squat bell turret of shingles with a wrought iron weather vane dated 1781. The church has some magnificent wall murals, for example the Last Judgement, from the mid-12th century (1150–1200). These murals, unique in England for their date and extent, were first brought to light during repair work in 1893 and were probably painted by artists from St Pancras Priory in Lewes.[2][3] Sir Norman Hartnell, who designed Queen Elizabeth II's wedding gown and coronation dress and served as couturier to Elizabeth II (and previously to The Queen Mother) is buried in the churchyard.

For the size of village there is a large recreation ground located at the west end of the village with a village hall, children's play area and two football pitches.

Katie Johnson, an actress best known for her acclaimed performance as the elderly Mrs Wilberforce in the 1955 film The Ladykillers, was born here in 1878.

The London to Brighton Way is thought to have passed close to Clayton as it climbed the South Downs escarpment.

New Road between Ditchling and Clayton (part of the B2112) was a branch of the turnpike road from Newchapel (in Surrey) to Brighton, via Ditchling. It was authorised by an act of parliament passed in 1830: