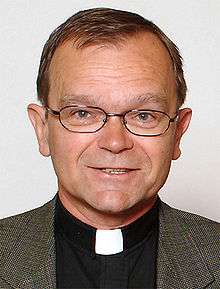 Canons in Bruges wearing a black collar during procession.

A clerical collar is an item of Christian clerical clothing. It is a detachable collar that buttons onto a clergy shirt, being fastened by two metal studs, one attached at the front and one at the back to hold the collar to the shirt. The collar closes at the back of the neck, presenting a seamless front. It is almost always white and was originally made of cotton or linen but is now frequently made of plastic. Sometimes it is attached with a collaret or collarino that covers the white collar almost completely, except for the top edge and a small white square at the base of the throat, to mimic the collar of a cassock. The clerical shirt is usually black (or another color appropriate to a person's ministry rank), with a detachable tab of white in the front. When clergy are delivering sermons, they sometimes attach preaching bands to their clerical collar.

A United Methodist minister with preaching bands attached to his clerical collar.

According to the Church of England's Enquiry Centre (citing the Glasgow Herald of December 6, 1894),[1] the detachable clerical collar was invented by the Rev. Donald Mcleod, a Church of Scotland (Presbyterian) minister in Glasgow.[2][3]

By 1840, Anglican clergy developed a sense of separation between themselves and the secular world.[4] One outward symbol of this was the adoption of distinctive clerical dress.[4] This had started with the black coat and white necktie which had been worn for some decades.[4] By the 1880s this had been transmuted into the clerical collar, which was worn almost constantly by the majority of clergy for the rest of the period.[4]

The Reverend Henry McCloud stated that the collar "was nothing else than the shirt collar turned down over the cleric's everyday common dress in compliance with a fashion that began toward the end of the sixteenth century. For when the laity began to turn down their collars, the clergy also took up the mode."[5] Invented in the Presbyterian Church, the clerical collar was adopted by other Christian denominations, including Anglican Church, Methodist churches, Eastern Orthodox Church, Baptist churches, Lutheran churches, and the Roman Catholic Church.[3] Prior to the Second Vatican Council (1962-1965) the practice of Roman Catholic clergy wearing the clerical collar as street-dress, tended to be found only in those countries where Catholicism was the minority religion. In the 1960s, many clergy who lived in countries where Catholicism was the dominant religion, began to wear the clerical collar rather than the cassock.

In the Reformed tradition, which stresses preaching as a central concern, pastors often don preaching tabs, which project from their clerical collar.[6] Preaching bands (an alternative name for tabs) are also worn by Anglican clergy, particularly on occasions such as inductions when choir dress of cassock, surplice, preaching scarf and the academic hood pertaining to degree is worn, as well as at Mattins and Evensong. Methodist and Lutheran clergy also sometimes attach preaching bands to their clerical collars. 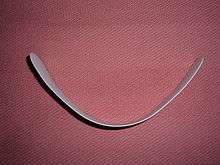 In the Roman Catholic Church, the clerical collar is worn by all ranks of clergy, thus: bishops, priests, and deacons, and often by seminarians who have been admitted to candidacy for the priesthood as well as with their cassock during liturgical celebrations.

Among the Eastern Orthodox Church and Eastern Catholic Churches a band collarette with no "notch" in front may be worn by seminarians, although the norm is still a standard clerical collar. However, as the cassock is more commonly, if not mandatorily, worn to classes, often a plain white shirt will suffice, or a band collar with no collarette. Slavic cassocks button to the side, and thus a collar is often pointless, whereas a Greek cassock buttons to the front and has a higher collar, so the collar prevents chafing—as was its original function under a cassock. Eastern deacons and sometimes subdeacons, but rarely readers or clerics, also wear a clerical collar, with subdeacons and readers often having a style with no notch, or a tab shirt with no tab. Most Orthodox clerics do not wear a clerical collar; those who do are usually to be found in Western Europe or North America

Collars are typically worn by clergy of other groups such as those of the Anglican, Methodist, Presbyterian and Lutheran traditions, although many Scandinavian Lutheran clergy wear the ruff instead.[7] Also many Pentecostal and non-denominational Christian, and others wear collars. In the Roman Catholic tradition, major seminarians, after receiving admission to candidacy (and thus becoming "candidates" for ordination), often wear clerics in the seminary and/or in their dioceses.

In the United Kingdom (and other British-influenced countries, such as Canada), clerical collars have been informally referred to as "dog collars"[8] since the mid-nineteenth century.[9] The term Roman collar is equivalent to "clerical collar" and does not necessarily mean that the wearer is Roman Catholic.[10]

During the 1950s the Reverend Alec Vidler began to advocate the abolition of the clerical collar in favour of a black shirt and white tie, but whilst some clergy adopted this mode of dress it did not become widespread. [11]

Members of religious orders will often wear a "Brother's Collar" or "Brothers Collarette" which is very similar to a typical clerical collar, but revealing a noticeably smaller amount of the white band.

Some Unitarian Universalist ministers choose to wear a clerical collar along with a stole.