Clerical clothing is non-liturgical clothing worn exclusively by clergy. It is distinct from vestments in that it is not reserved specifically for services. Practices vary: is sometimes worn under vestments, and sometimes as the everyday clothing or street wear of a priest, minister, or other clergy member. In some cases, it can be similar or identical to the habit of a monk or nun.

In modern times, many Christian clergy have adopted the use of a shirt with a clerical collar.

In 1215, a church council made it mandatory for all the Christian clergy to wear distinctive dress. Its purpose was not necessarily to elevate the status of the Christian clerics; it was intended that they would catch the public eye if any member of the clergy is seen on the street.[1] 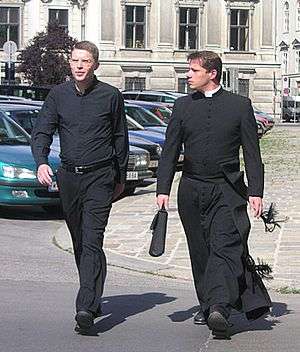 On the right, an example of the full collar shirt and cassock; on the left, a clerical shirt that could have a tab collar inserted.

This applies to the Latin clergy only. Clergy of the Eastern Catholic Churches dress in a similar fashion to local Orthodox clergy.

According to the 1604 Canons of the Church of England, the clergy were supposed to wear cassock, gown, and cap whilst going about their duties. The cassock was either double or single breasted; buttoned at the neck or shoulder, and was held at the waist with a belt or cincture. The gown could either be of the special clerical shape - open at the front with balloon sleeves - or the gown of the wearer's degree. This was worn with the Canterbury Cap, which gradually stiffened into the familiar 'mortar board' in the course of the 17th and 18th centuries. Cassock and gown were worn as outdoor dress until the beginning of the nineteenth century, with the Canterbury Cap being replaced by the mortar board or tri-corn hat latterly. Increasingly, though, ordinary men's clothing in black, worn with a white shirt and either a black or white cravat, replaced the dress prescribed by the Canons.

In the 19th century, it was fashionable among gentlemen to wear a detachable collar which was washed and starched separately from the shirt. Initially with the detachable collar, Anglican clergy wore a white cravat, later a white bow tie, with a waistcoat with a standing collar and a loose clerical frock coat resembling a knee length cassock with multiple buttons to waist level. Alternatively they could wear the normal style of gentleman's frock coat and a rabat (See above). In the earlier part of the century, Evangelicals often wore 'swallow tail' coats to distinguish themselves from the High Churchmen who favored the frock coat. This distinction is mentioned as late as 1857 when it is alluded to in Anthony Trollope's 'Barchester Towers.' In the middle of the century Anglican clergymen began turning the collar around backwards, creating the first versions of the "dog collar". This form of distinctive dress was seen as a controversial affectation of the High Church party, but as time progressed the collar-turned-backwards became more common, and even survived the demise of detachable collars among the general public. Though the black waistcoat has given way to a black shirt, the collar has become a daily part of clerical costume for most Anglican clergy. However, some Anglican clergy join with ministers of reformed churches in eschewing distinctive clerical costume entirely.. During the 20th century Anglican bishops began wearing purple (officially violet) shirts as a sign of their office. Along with the pectoral cross and episcopal ring, this marks them off from other clergy in appearance. While there is no law among the churches of the Anglican Communion that prevents other members of the clergy from wearing a purple shirt, to do so is generally not considered appropriate.

Until the Regency period, Anglican clergy regularly wore the cassock in public, after enjoying something of a revival in the mid-20th century, this custom is again less common. The traditional Anglican headwear with the cassock was the Canterbury cap, which is now seldom used. Some Anglo-Catholic clergy still wear the biretta. From the mid-eighteenth century, Bishops and archdeacons traditionally wore a shortened version of the cassock, called an apron (which hung just above the knee), along with breeches and gaiters. The gaiters, buttoned up the side, would cover the trouser leg to a point just below the knee. This form of everyday vesture, common up until the 1960s, is now almost extinct. (This was appropriate for them in the time when some of their travelling would be on horseback but continued into the middle of the 20th century.)

Anglican clergy typically favour a double-breasted cassock (known as a Sarum), often with an external button at chest level on which to hook an academic hood (which is worn as part of the choir habit). Clergy of a more Anglo-Catholic persuasion however often favour a cassock similar to that of Roman Catholic clergy. Single breasted cassocks of other designs are also sometimes used. Like Roman Catholic clergy, some Anglican clergy wear the fascia (known within Anglicanism as a cincture) around the waist, while others prefer a belt. Where extra protection from the elements is needed a cloak may be worn over the cassock.

Clergy of the royal peculiars, senior chaplains to the forces, members of the Chapels Royal and Honorary Chaplains to the Queen may wear a scarlet cassock and a special badge (Queen's cypher surmounted by St Edward's crown surrounded by oak and laurel leaves) on their scarf.

It has been mentioned above that the headcover normally worn with the cassock is the biretta (for Roman Catholics) or the Canterbury Cap (for Anglicans). In the 19th century clergy, like most gentlemen of the time, wore the tall silk (top) hat with their outdoor dress and this remained traditional for bishops and other senior clergy for many years.[2] However many clergy preferred to wear a distinctive broad brimmed round topped hat resembling a low crowned bowler and this remained popular until the World War I, when it tended to be substituted by the dark or black Homburg style hat worn by many professional men until recently. 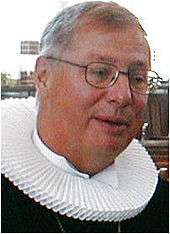 The ruff, as worn by a Danish Lutheran bishop.

Lutheran clerical clothing varies depending on locality and denomination. The clerical clothing of Lutheran priests and bishops often mirrors that of Catholic clergy; cassock or clerical shirt and a detachable clerical collar. In Scandinavia Lutheran bishops usually wear a pectoral cross.

Danish clergy will wear a black cassock, as in Anglican and Catholic traditions, but with a distinctive ruff. The ruff is a large collar, stiffly starched, worn over the top of a full clerical collar. Until the 1980s, this used to be the custom in Norway also, and was a relic of the period when Denmark-Norway had shared a common monarchy (1384-1814).[3] In Sweden, a distinctive form of frock coat was worn by the clergy, and is still seen on formal occasions when it is worn with a stand-up collar and short bands.

In British Methodism, a minister (presbyter) often wears a simple business suit with a coloured shirt and clerical collar. For more formal services a minister will adopt a cassock with bands. For ceremonial and very formal occasions, such as the (British) Remembrance Day service at the Cenotaph in London, a traditional black Geneva preaching gown, academic hood and bands may be worn.

Methodist deacons (male or female) have a less strict dress code; but they often wear dark blue clothing, and always wear the pectoral cross of their religious order.

The dress of those lay members of the congregation who sing in the choir, and of the organist, varies from congregation to congregation. A typical costume might be a blue cassock, English-style plain white surplice, and for women a canterbury cap.